Developing corn hybrids with improved nitrogen use efficiency – whether they have higher yields under normal nitrogen levels or maintain their yields despite low nitrogen levels – is a significant challenge. Such hybrids are likely a decade or more from the marketplace, but progress is being made.

“So much of crop biotechnology has been based on success with insect and herbicide traits where efficacy is very easy to demonstrate – you kill a bug or you don’t kill it. It’s not dependent on the environment, on rain or cold weather, or soil type. So all of the notions of success, all of the testing, everything has been based on that model. But improving nitrogen use efficiency is a lot harder,” explains Nic Bate, group leader, agronomic traits with Syngenta Biotechnology.

“People envision plants as being simple things that are easy to manipulate. But in terms of genetic complexity, environmental dependency, all these things together, [this research] is trying to do something that no one has ever done before – increase the productivity of a crop plant in a targeted way. That’s why it takes a long time.”

Nitrogen use efficiency (NUE) can be defined as the grain yield per unit of nitrogen available in the soil, including nitrogen fertilizer. Better NUE offers a lot of potential benefits. It could increase crop yield potential, reduce fertilizer inputs, decrease nitrogen losses into the environment and reduce energy inputs into agriculture (because nitrogen fertilizer production is energy-intensive).

Boosting NUE requires basic research to identify genes that play a role in NUE as well as lengthy testing in growth chambers, greenhouses and field situations to find out if those candidate genes will noticeably enhance NUE in farmers’ fields.

Genetic underpinnings of NUE
One of the researchers involved in fundamental research on the genes involved in nitrogen use in plants is Dr. Steven Rothstein in the department of molecular and cellular biology at the University of Guelph.

“Our role is to try to understand the effects of growing plants under different conditions, in this case under limiting nutrient conditions, and to see what effect that has on phenotype, depending on the plant’s genetics. By understanding that information, we hope to generate knowledge that can be used by our commercial collaborators to develop lines that utilize the nutrients more efficiently,” says Rothstein.

“What is challenging – and this is the case for any complex trait, whether it’s yield, or yield under drought conditions, or yield under limiting nutrient conditions – is to understand how different types of changes in different genetics can have an effect on how efficiently the plant deals with those conditions.”

Rothstein’s lab studies commercially important plants like corn and rice as well as model plants like Arabidopsis. What researchers learn from model plants can often be applied to other plant species. Arabidopsis is used in such research because it has a relatively small genome – in fact, it was the first plant to have its entire genome sequenced. Also, the plant is small, has a short life cycle and produces lots of seeds, so it’s easy to use in lab and greenhouse studies.

In the first approach, the researchers compare plant populations with some significant difference that has been created either by traditional breeding or biotechnology. Rothstein explains, “For example, we identified a set of genes in Arabidopsis that were important in modulating the amount of green in a plant – the amount of chlorophyll and the number of chloroplasts – particularly under lower nitrogen conditions. Then we identified similar types of genes in crop species like rice and corn, and we found that these analogous genes in those species also had that effect.” Lines with those types of genes are in the process of being tested to see whether they increase chlorophyll production under low nitrogen levels in a field situation.

The research at Rothstein’s lab has led to some intriguing new insights into nutrient use, such as a possible way to improve phosphorus uptake in plants, and has generated several patented discoveries.

“We’ve studied a number of gene systems, and we’ve filed patents along with our collaborators on several, and we’re hopeful that some of them will prove to be fruitful,” says Rothstein. “However, although we understand how a particular set of genes might affect the physiology of the plant, it takes a number of years of testing to see whether it actually proves to be commercially useful.”

Rothstein has been collaborating with Syngenta on this research for more than 10 years. Along with providing some of the funding for Rothstein’s research, Syngenta conducts detailed testing to assess the commercial value of candidate genes identified by his lab.

Evaluating commercial value
“We use Dr. Rothstein as a source for gene leads for improving the nitrogen use efficiency trait. Throughout the course of our collaboration, he has generated leads that are currently in our testing pipeline,” says Bate.

“We go through a series of steps to prove that the genetic modification has an effect, that it has some research value, and that this research value translates into some business value – so perhaps three, four or five steps to get to a place where we’re demonstrating business value.”

The focus of Syngenta’s NUE efforts is to improve crop yield under normal nitrogen conditions, rather than maintaining yield with lower nitrogen levels, notes Bate. “So if a lead comes into our system for evaluation, it has to increase overall plant yield to have true business value.”

“Our main challenge is demonstrating efficacy in a field situation because nitrogen use efficiency is a complex trait and has many interactions with the environment,” explains Bate. “Different soil types, weather patterns, water availability – all those things influence how well this trait might work in a particular hybrid. So providing the right testing environment in a field situation is likely the biggest challenge.”

Other seed corn companies are also working toward hybrids with enhanced NUE. They use candidate genes from various sources and put them through extensive testing processes.

DuPont Pioneer’s work on NUE involves both maximizing corn yields under normal nitrogen applications and improving yields in low nitrogen input situations. “Nitrogen can be an expensive input cost to growers, and if we can generate more bushels of corn per unit of nitrogen applied, then it can benefit the growers. And certainly in geographies or environments where input costs or environmental stewardship concerns are sensitive, improved nitrogen use efficiency can have a benefit,” notes Steve King, corn research director for DuPont Pioneer in Canada.

The company’s approach to NUE improvement is similar to its approach to other agronomic traits. King says, “We’re looking at solutions that could either be transgenic or through conventional breeding. We have a certain amount of genetic variation for nitrogen use efficiency in the normal corn germplasm and then we can also extend that level of variation by using a transgenic approach.”

According to King, field testing is one of the main challenges in developing corn hybrids with greater NUE. “When we are field testing in a low nitrogen environment, it is very difficult to get a uniform response from the front to the back of a test location. When you apply a stress, whether it’s drought or low nitrogen, the corn responds differently based on minor differences in soil, from the front to the back of the field,” he explains.

“So we’ve had to establish special fields in the U.S. where we draw down the nitrogen over a period of years and then assess the uniformity. Once we have uniformity, then we can test lots of different genetics in those fields and be confident that we have response just to nitrogen rather than a response to soil variation.”

Monsanto and BASF are collaborating to enhance NUE in corn under both normal and low nitrogen conditions. “In some cases, growers will be able to maintain nitrogen levels and see an increase in yield due to more efficient use of applied nitrogen,” says Derek Freitag, technology development lead in Eastern Canada for Monsanto. “In other cases (similar to what we have seen in some areas in 2013), growers may see a reduction in applied nitrogen due to excessive rain or drought conditions. In this case, corn hybrids with traits geared for improving nitrogen use will better maintain their yield potential by using the available nitrogen in a more efficient manner.”

Monsanto and BASF are testing a large number of NUE candidate genes. Freitag says, “Some challenges [in this work] will be to understand how growers use nitrogen today, including rates and timings; for instance, do certain combinations produce different results. Also the impacts of soil type and nitrogen availability make testing over larger acreages very challenging. Our testing program requires large trials to look at multiple products and practices, so understanding all of the interactions going on in any one particular trial is very important.”

Dow AgroSciences’ work on NUE is an integral part of its overall corn breeding work. Larry Robertson, global project leader for corn at Dow AgroSciences, says they’ve had to deal with the difficulties of sorting out the effects of environmental factors like moisture conditions when evaluating candidate genes. “As well, it becomes a real balancing act between nitrogen availability and storage and timing, because the availability of nitrogen at critical growing points has a much bigger impact on corn yield than at other times of the year.”

Increasing nitrogen use efficiency in corn is a complicated task. There are challenges through the whole research and development process, from the search for the genes involved in nitrogen use all the way to the complex field-testing process. A key driver to overcome these challenges is the potential for significant benefits in corn yields, nitrogen inputs and agricultural sustainability. 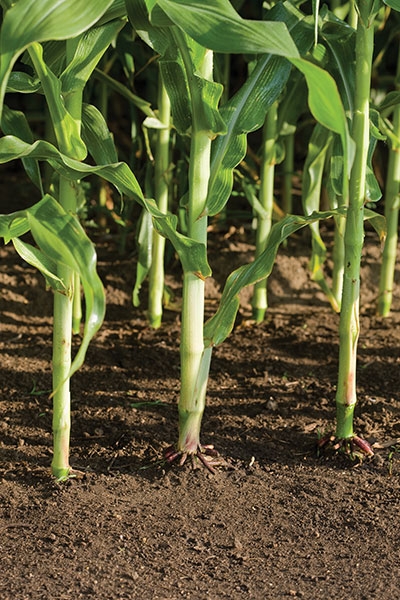