With approximately five per cent of Alberta’s seeded acreage going into pulse crops, there is plenty of room for growth. Compared to Saskatchewan’s 15 per cent of cropped acres, Alberta pulse acres lag far behind.

“Ideally, we would be in a one-in-four rotation with pulses but at least getting to where Saskatchewan is at with pulse acres would be a good goal. Making that leap from 15 per cent to 25 per cent, though, is a pretty big jump,” says Mark Olson, unit head-pulse crops with Alberta Agriculture and Rural Development’s (ARD) crop research and extension division in Stony Plain.

ARD conducted several farmer surveys over the last two years to better understand the barriers to pulse crop production in Alberta. With a good agronomic fit in crop rotations, and the potential to increase production to satisfy growing world demand, the research was done to help guide ARD on how to overcome some of these barriers.

One study done for ARD by Blacksheep Strategy looked at the reasons growers in Alberta grew pulse crops, but also why they didn’t. The main reason why growers grew pulses, cited by growers who grew them, was for crop rotation benefits at 79 per cent. Good prices/returns was mentioned 49 per cent of the time, fixes nitrogen/saves on fertilizer at 40 per cent, and herbicide/chemical rotations at 13 per cent.

On the flip side, the barriers to growing pulses varied with no particular reason holding back increased seeded acreage. “When you look at some of the factors that challenge growers, the hassle factor is commonly mentioned. Some of those hassles can be addressed through extension and others will have to be addressed through research and new variety development,” says Charlie Pearson, ARD provincial crops market analyst at Edmonton, Alta.

The market research looked at three segments of growers: those who grow pulses, those who did but have stopped, and those who have never grown pulses.

Olson was involved in another study in 2012. Farmer focus groups and telephone interviews delved into the reasons why Alberta farmers were not growing pulses. The hassle factor was present in that study as well.

“Farmers are well aware of the nitrogen fixation and rotational benefits that pulses bring, but standability is still a big issue in field pea,” says Olson. “The big concern is that we need better standing varieties so that harvestability is better.”

Related to standability is a disease issue that is starting to develop in Alberta. Fusarium root rot seems to be striking pea stands later in the growing season, causing stand collapse and loss of yield. Olson says some seasoned growers have noticed that stands that should have been running 60 or 70 bushels per acre are coming in at 30 to 40 bushels.

“We have questioned why root rots are suddenly becoming a concern, and ARD is working with Agriculture and Agri-Food Canada to understand the disease better,” explains Olson.

Pearson also says that crop rotation plays a big part in pulse acres, with canola outcompeting pulses because of the high net return on canola. “There is competition for land for all crops. We need to demonstrate how pulse crops can fit into rotations, and that it can be very competitive on a profit per acre compared with other crops,” he says. “Farmers need to not only look at the benefits of pulses in the year they are grown but also agronomic and yield benefits to crops grown in subsequent years.”

Expanding the pulse choices
Historically, field pea has led the way in acreage, followed by lentil. Chickpea was grown on 20,000 acres in Alberta in 2012, although Statistics Canada doesn’t show any acres in 2013. Olson says fababeans are showing strong interest from growers, as the crop is a big nitrogen fixer and the crop is relatively easy to grow and harvest. Yields have typically ranged in the 50 to 60 bushels per acre for fababeans, with some growers hitting 70 to 80 bushels on dryland and 125 bushels per acre under irrigation.

“The biggest concern for fababeans is marketing. You want to make sure you have a signed contract so that you aren’t left sitting with the crop,” says Olson.

Fababeans are sold into the human consumption and animal feed markets. SaskCan Pulse Traders and Parkland Alberta Commodities both market fababeans. Farmers typically sign unpriced production contracts with movement of the product in early fall and spring. Prices for human consumption fababeans were around $9/bu in 2012 and $8/bu in 2013, which compares favourably with canola net returns. Low tannin and tannin types are marketed into Eygpt and other Middle East countries.

Feed quality fababeans trade at a price roughly equal to feed pea price for low tannin types. Tannin types can be more difficult to market into this market if a poor grade is incurred because it can only be fed to ruminants.

Soybeans are another crop that growers have shown interest in. While the acres are still limited in Alberta, the market is developing. Previously, soybeans were shipped to Manitoba, but now some soybeans are going to China in shipping containers, opening up a new market for Alberta growers. While the agronomics of growing the crop still needs sorting out, soybeans are definitely on the radar in Alberta.

“On the demand side, there are great opportunities for pulse crops in Alberta. There is a growing demand in world markets, and Canada has a solid reputation for producing quality pulse crops,” says Pearson. “If we can get some of the barriers to producing them figured out, I think the acreage will rise, especially given the benefits of growing them in rotation.” 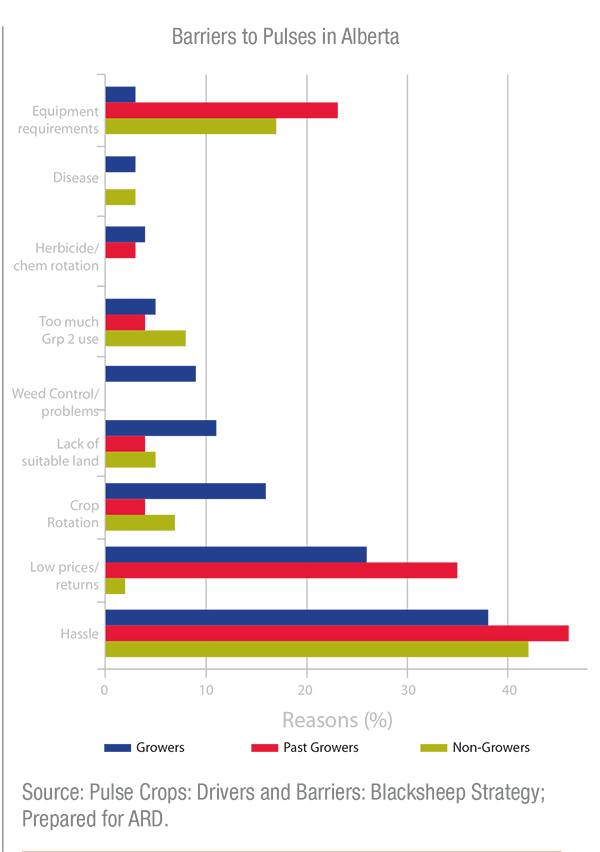 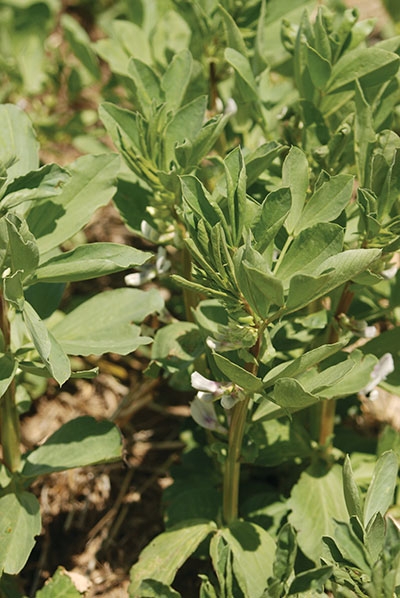 Fababean production is offering a profitable option to pulse growers. With approximately five per cent of Alberta’s seeded acreage going into pulse crops