Overheard on coffee row was the great response a neighbour received from applying potassium (K) fertilizer to canola. Setting aside the validity of coffee shop rumours, soil fertility specialists say that understanding soil chemistry and soil development will help determine the need for K fertilizer on canola. A soil test and knowledgeable agronomist doesn’t hurt, either.

While the majority of Alberta, if not most Prairie soils, have adequate K for crop production, about 15 per cent of Alberta soils are estimated to have a slight to moderate K deficiency. Other areas of the Prairies, mostly Black and Gray soils with coarser texture, may also have some deficiencies.


Clay soils contain large amounts of K
On the Prairies, most soils developed from glacial till, and the most common soil texture is a clay loam soil. Glacial till soils are generally heterogeneous and can be quite variable, with a mixture of clay, silt and sand. However, clay in these types of soils have naturally high levels of K. In addition, Prairie soils are young and only slightly weathered because of our cooler climate and moderate amounts of precipitation. As a result, most Prairie soils have a relatively high cation exchange capacity (CEC), which is an indication of the amount of positively charged ions (cations) that can be held by the soil. Potassium is a positively charged cation and is closely held by soils with high CEC. A high CEC of 20 to 30 cmol/kg means the soil can hold on to nutrients like K very well, and the soil is highly fertile in that nutrient. A very low CEC of 1 to 5 cmol/kg could mean available K is low.

“Our relatively unweathered soils on the Prairies can hold a lot of potassium in the soil, but if you look at older soils in more tropical regions, or more highly weathered soils like southeastern U.S., potassium levels are much lower,” says McKenzie.

The International Plant Nutrition Institute (IPNI) analyzes soil test results across North America every five years. Its most recent analysis in 2010 showed median soil test K levels in Alberta at 173 ppm, Saskatchewan at 236 ppm and Manitoba at 217 ppm. Critical ammonium acetate K equivalent levels for the relatively high cation exchange capacity (CEC) of Prairie soils is about 160 ppm. Critical level is defined as the soil test level below which nutrient inputs are required to meet soil fertility management objectives. For canola, wheat, mustard, flax and pulse crops, ARD guidelines indicate that soils testing greater than 150 ppm (300 lb./ac in 0-6 inch soil test depth) generally have adequate K levels for most crops. To convert ppm to lb./ac in a zero-to-six-inch soil test, multiply by a factor of two.

The IPNI report showed that 45 per cent of samples tested were below the critical level in Alberta, 26 per cent in Saskatchewan and 32 per cent in Manitoba. While this seems to run contrary to our highly fertile K soils, part of the answer to the contradiction is found in the IPNI survey itself. The soil test summaries are based on tests performed by 60 private and public laboratories on 4.4 million soil samples in the fall of 2009 and spring of 2010. However, there is no way to know if these samples are representative of all areas of the Prairies or if the soil tests were more heavily weighted to deficient areas. Also, most soil testing labs in Western Canada do not use the ammonium acetate method to determine soil test K.

The other part of the answer is shown in provincial estimates of where K deficiencies may occur (see map pg 74). Most often, K deficient soils can be found on peat and sandy soils in Western Canada. Coarse soils high in sand do not hold as much K in the soil profile and thus show up as deficient. Medium (loam) soils in the Black, Gray-Black and Gray soil zones also have greater potential to exhibit K deficiencies. In irrigated areas, coarse textured soils with intensive crop rotations that include potatoes, sugar beets and/or alfalfa in the rotation can require potassium.

“Potassium fertility is very related to clay content. As a result, peat soils are extremely low in potassium because peat is not a mineral soil,” says John Heard, soil fertility extension specialist with Manitoba Agriculture, Food and Rural Initiatives at Carman, Man.

Heard also has seen elevated large K levels under burn rows where poplar trees were piled during clearing and even under straw windrows that were burned after harvest.

K and canola
While canola has a high requirement for K, the crop does not remove much from the soil, and does not drain down the large reserves very quickly. A 35-bu/ac yield of canola requires 90 lb./ac of K2O, but only 20 lb./ac is removed with the seed. Similarly, wheat, barley and flax remove only small amounts from the soil, and the majority of the soils in Western Canada can supply adequate amounts of K for many years. However, McKenzie points out that many Prairie soils have been cropped for over 100 years. Even though only small amounts of K are removed each year by most crops, the cumulative effect has been a gradual decline in plant-available soil K. While the majority of Prairie soils still have adequate soil K levels, farmers should keep a close watch on their soil test reports for K, particularly on coarser textured soils.

Higher-use crops that remove larger amounts, such as potatoes (300 lb./ac is removed in 20 t/ac yield of tubers) and alfalfa (300 lb./ac removed in a 5 t/ac yield) can draw down K fertility levels, and may require additional K fertilizer to maintain yields and prevent depletion of K in the soil.

Research has shown that canola is responsive to K2O fertilizer under low fertility conditions where the nutrient is deficient. Barley is by far the most responsive, followed by wheat and then canola.

“From my observations, canola response to K fertilizer is not very spectacular. It takes up a fair bit of K, but removes precious little,” says Heard. “It seems to be able to grow on low K soils fairly well. It is those other crops in the rotation – cereals, corn, soybeans and alfalfa – that will first signal deficiencies and lower yields on low K soils.” (see Fig. 1)

Recommended K application rates for canola, flax and mustard in Alberta were developed by McKenzie at ARD. While most soils test well above the 300 lb./ac soil test K and do not require potash fertilizer, the guidelines are useful on soils with marginal or deficient test levels (see Table 1).

High yield on high soil test K
Back to that coffee shop talk. Yield increases in various crops have been observed on soils testing high in K, so what gives? Possibilities include a response to the chloride ion found in potash fertilizer, field variability that is not reflected in soil test results and K response on cold soils in the spring where limited root growth prevents early season uptake.

For example, research on high K soils in Montana found that barley responded to 20 lb. K2O/ac when planted in early April and early May (7 and 6 bu/ac increase) compared to only a 3 bu/ac increase when seeded in early June.

Field variability can also account for most of the responses found on high-soil-testing K fields. McKenzie says that K can be variable across a landscape and that growers should be aware of this when developing fertility plans. Soil K levels are often much lower on upper slope positions and eroded knolls versus the mid and lower slope positions. Therefore, a general field soil sample for an average of the field may show soil K level being adequate, but 20 or 30 per cent of the field may be deficient in soil K.

“Potassium can be variable, absolutely. Especially on hilltops that are eroded, potassium is usually lower, as is phosphorus and sulphur,” says McKenzie.

Research conducted by Doug Penny with Alberta Agriculture and published in 1996 showed the variability of K fertility on a rolling field at Mundare, Alta. The average soil test K level was 135 ppm, but 30 per cent of the field tested less than 101 ppm. While an average soil test from this field would have been adequate to marginally deficient, 30 per cent was moderately deficient and may have responded to K application (see Fig. 2.).

On fields with variable soils, McKenzie says that farmers could look at variable rate K applications and should do this with side-by-side trials. “Yield monitors aren’t always that accurate, so unless you do side-by-side trials, you really aren’t sure if you are getting a response,” he says. 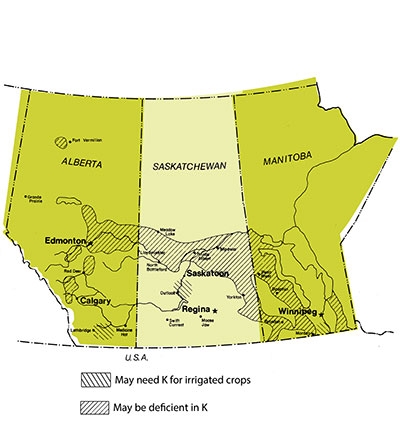