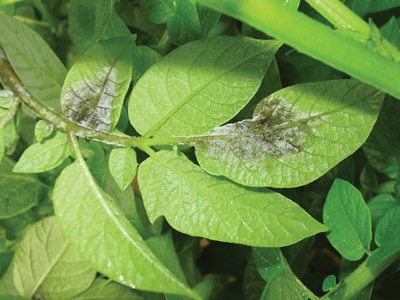 Managing late blight is an ongoing challenge, but knowing which strain one is faced with controlling can go a long way in minimizing the frustration. There may not be many tools in the fungicide toolbox, but those that are there can be used more effectively if it is undearstood which strain is in the field. Unfortunately, just as growers reach that knowledge a new strain is identified. In 2010, a US-22 strain was identified in Michigan; thankfully, it did not reach Canada. However, it could, and then what will growers be left to do?

Until 2009, there was no clear national strategy on dealing with late blight, and information collected by one provincial agricultural department was not always shared with other provinces in a timely manner. It was also unknown if all Canadian potato-growing areas were dealing with the same strain. Reports would be filed that products were ineffective in one area, but worked in another, and it was unknown if this was due to product failure or incorrect application or if, in fact, the strain of late blight in that area was resistant to the fungicide.

To minimize the confusion and to ensure all growing areas have the same information, Dr. Khalil Al-Mughrabi, a pathologist with the Department of Agriculture, Aquaculture and Fisheries in New Brunswick, proposed forming the National Potato Late Blight Working Group. The group would ensure the prevalent late blight strains would be identified in each area and determine which of the available products would offer effective control. “We wanted to get an idea of what late blight strains exist in Canada and develop a national screening program,” Al-Mughrabi explains. Until the organization of the working group, of which he is chair, he says there was overlap and repetition and very little information was shared because there was not a mechanism to do it. “Now, with a co-ordinated approach, we can develop a national picture of late blight in Canada.”

So, what about US-22? Is it a threat to Canadian potatoes? It could be because it is a mutation of US-8 and US-14 strains. The US-8 strain has been in Canada since 2006, but has been effectively controlled with fungicides. “In 2009, US-22 was more aggressive on tomatoes, but also affected US potato crops,” reports Dr. Eugenia Banks, potato specialist with the Ontario Ministry of Agriculture, Food and Rural Affairs (OMAFRA). “Fortunately, US-22 is susceptible to mefenoxam. Our most common strain, US-8, is resistant to mefenoxam, which has been a problem for growers.”

If there is an upside to having US-22 enter Canada, it could be that there are some effective options for control. Banks says two other strains of late blight, US-23 and US-24, have been identified, with the latter prevalent in North Dakota, which could have an effect on the Manitoba crop. “It is important for growers to find out what strain is infecting their fields,” continues Banks.

It is the goal of the working group to identify the strains and then to keep growers informed so they can choose the best method of control. “We are developing fact sheets on late blight that will carry the same message to all growers in Canada. We had two research projects funded in 2010 to learn what products work on which strains,” Al-Mughrabi says. “We also want to develop an extension program that would allow presentations that everyone in the potato industry can access.”

A website is also planned that will keep current on the latest findings regarding late blight and it will include contact information for each province to give growers access to the late blight experts in their area. In addition, a YouTube video (www.youtube.com/watch?v=q1Xa4bJ_YnI) on Al-Mughrabi’s late blight management initiatives was started in Alberta to give growers more information about late blight. “The preliminary results at the end of 2009 showed that Manitoba has US-11 and US-6 while US-8 is most common in Quebec, New Brunswick and Prince Edward Island,” Al-Mughrabi reports.

In 2010, he received samples of blight from across Canada with the goal to identify the predominant strains in each growing area. The strains are being identified by Agriculture and Agri-Food Canada scientists in Charlottetown, Prince Edward Island and Lethbridge, Alberta. Knowing the strain common to an area can go a long way in knowing what products to use for effective control. He says research on using phosphoric acid to control late blight is showing it is as close to a magic bullet as possible (see sidebar). “There is no one single strategy to control late blight,” admits Al-Mughrabi. “What you need is a combined approach using seed treatments and sprays. We also know that the speed of the sprayer can affect how well the product works. With phosphoric acid, while it is highly effective, it has to be applied at the right time in order for it to do a good job.”

Al-Mughrabi’s initiative to develop a national network of late blight experts who share information and then deliver it to growers may prove to be what is needed to keep late blight in check consistently. With ready access to the latest information and knowledge of what strains are prevalent in each area, growers will not have to worry needlessly every time a new strain is reported south of the border. Instead, they will know which strains they are likely to face if conditions are right for late blight infections and they will know which products will effectively control that strain. They will also have all the information available to continue resistance development minimization.

With the 2011 growing season quickly approaching, growers can be confident that rumours of new strains of late blight entering Canada are already being researched by members of the National Potato Late Blight Working Group. And those members will, no doubt, have the strains identified in each region and control strategies to recommend before any of the late blight pathogens can become a yield-robbing problem.