A recently discovered group of endophytes – organisms that live within plants – is on the path to commercialization. Laboratory and field tests are showing the remarkable potential of these endophytes to provide diverse benefits, such as increased germination, greater tolerance of drought and higher yields, in many crops on the Prairies and around the world. 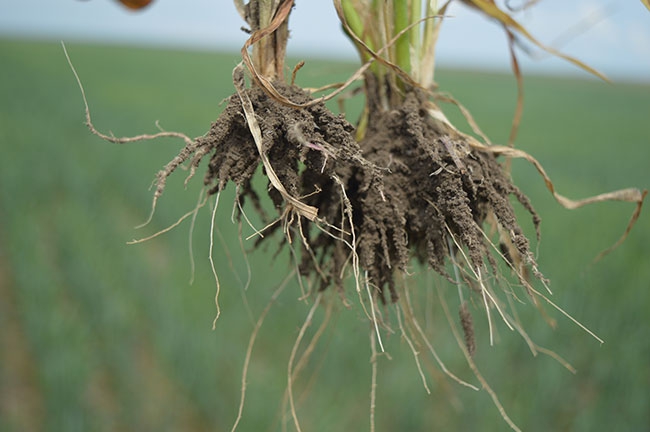 Vladimir Vujanovic discovered these endophytes a few years ago through his research on plant-associated microbiomes (microbial communities) while he was working at various research institutions in Canada. His research involved all-taxa diversity studies. “That means that I studied everything – all the microbes related to some particular crop and particular tissue of the plant,” he explains. “For instance, if I was interested in maple leaves, I looked at all the microbes present in the leaves of maples in different ecosystems.”

The group of endophytes Vujanovic discovered are fungi that are specific to an evolutionary group of plants that includes crops like canola, pea, wheat and durum. When he moved from Montreal to the University of Saskatchewan in 2005, Vujanovic began investigating these endophytes and their effects on Prairie crops. Initially he worked with wheat because of its importance to the Prairie economy, and then he expanded his research to include canola and peas.

He says, “Canola triggered my interest because it normally is not a symbiotic plant, unlike pea for example. Pea lives in symbiosis with the bacterium Rhizobium to get nitrogen through the nitrogen fixation process.” Similarly, pea and wheat are hosts to mycorrhizal fungi, which colonize plant roots and bring nutrients like phosphorus from the soil to the roots. “However, there are no rhizobial or mycorrhizal beneficial groups of fungi that are associated with canola. So I wanted to see whether canola could be associated with our group of endophytes, and we discovered the group did associate with canola as well.”

According to Vujanovic, most scientists who have studied plant-microbe associations have focused on root-associated microbes in the rhizosphere (the soil surrounding the root system). But his research also includes the spermosphere – the soil surrounding the seeds. “That’s because we are interested in looking at the early association of microbes with seeds and also the continuum of the growth and association of microbes with plants from seed germination and plant establishment to the mature plant,” he says.

“Each step of a plant’s life cycle has different needs for nutrients, for disease resistance, for resistance to abiotic stresses such as drought, and so on. The idea in our research is to get endophytes that could help plants throughout their life cycles [with these different needs].”

Currently, Vujanovic is the lead investigator in a three-year project (2014 to 2017) to develop the endophytes as commercial inoculants. He and Jim Germida, his colleague at the University of Saskatchewan, are working on this project in partnership with Genome Canada (a not-for-profit agency that acts as a catalyst in genomics research and development to create benefits for Canadians), Genome Prairie (a non-profit organization that supports stakeholders across Manitoba and Saskatchewan in maximizing the benefits of genomics and related biosciences) and Indigo Ag, Inc. (a U.S.-based company specializing in plant-associated microbial products).

The project team is testing diverse combinations of the endophytes, ecosystems, crops and crop varieties to find ones with commercial potential. The testing includes such crops as wheat, corn, soybean, canola, barley and pulses.

“Indigo is testing these inoculants in different ecosystems throughout the world, and we are doing the same thing in Saskatchewan,” Vujanovic says. “We have passed through laboratory, phytotron [controlled environment conditions] and greenhouse tests. We have moved on to field tests in research field trials, and we have passed some demonstration tests.”

The results to date look quite promising. However, Vujanovic won’t speculate about when the endophyte inoculants will be commercially available for growers. He notes that, so far, each step along the way – from the first discovery of these endophytes, to laboratory proof of their effects, to testing of the endophytes in combination with specific crops – has taken a long time.

He also emphasizes the importance of the funding support this research has received since 2005. That support includes funds from the Saskatchewan Ministry of Agriculture’s Agriculture Development Fund and the Natural Sciences and Engineering Research Council of Canada, as well as Genome Canada. In addition, his current research has received funding from the producer-led Saskatchewan Wheat Development Commission (Sask Wheat) for additional endophyte field trials with wheat.

Vujanovic sees several ways the results from this research could help crop growers.

“For example, with the effects of climate change, we have situations where farmers need to put more agricultural inputs in the field – more fertilizers, more irrigation, more pesticides – because we have increasing numbers of disease outbreaks. And for each of these problems, you have to have particular management practices; you have to have the right fertilizer, the right pesticide and so on. It seems like we are fighting with the complexities,” he says. “But the endophytes are able to help plants in each of these aspects. Endophytes can increase the plant’s resistance against abiotic stresses like drought, [increase water economy and nutrient supplies to the plant], and enhance the plant’s resistance against biotic stresses such as disease.”

Why is such a broad range of plant benefits possible with endophytes? According to Vujanovic, unlike crop breeding programs that concentrate on particular genes to improve the plant, endophytes are able to work with a plant’s microbiome in general and with the plant’s whole genome. “This is where the promise is with endophytes,” he says.

The project is also developing important information specifically for Prairie and Canadian crop growers. The researchers are proving elite Canadian cultivars are compatible with these endophytes, and they are compiling cultivar-specific data on responses to the endophytes, including improvements in traits like crop growth and yield.

In addition, Vujanovic sees tremendous potential benefit from the transfer of the new knowledge acquired from the project to crop growers. He believes the resulting knowledge could enable conventional and organic growers to manage their crop production systems in ways that would promote beneficial endophytes in their fields.

As well, he says this research is giving University of Saskatchewan students an unprecedented opportunity to learn first-hand about microbial genomics and about genomic tools and technologies.

Vujanovic says, “For Canada and the Prairies, this research is providing good momentum, that we have the knowledge, the products, and the partners, including international partners, to help move forward with these products and make them accessible to farmers.”