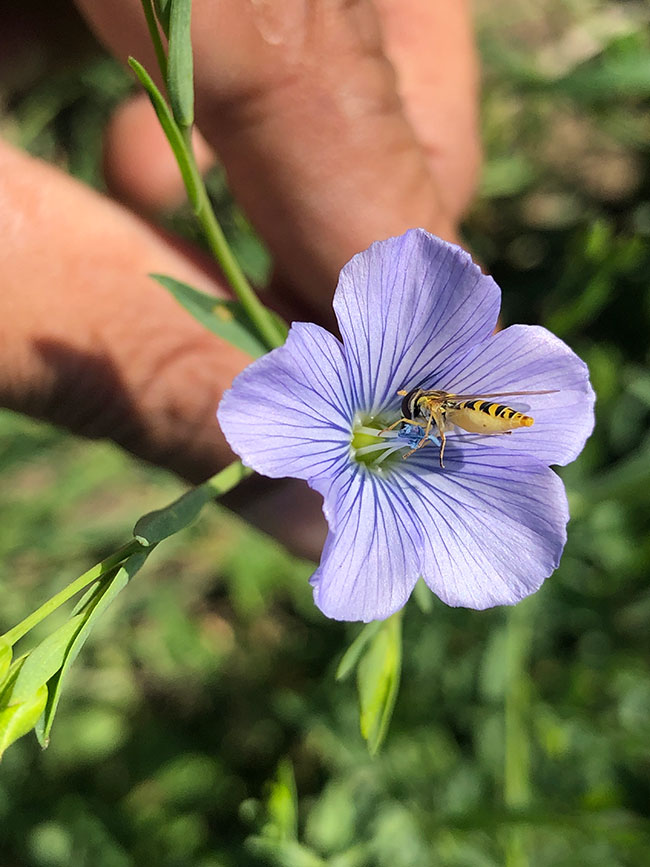 Converting lower productivity areas on farms into pollinator habitat can enhance the environmental health of an agricultural landscape. So, a Farming Smarter project is looking into some of the practicalities of growing such pollinator havens to provide information and advice for interested farmers.

Awareness that bee populations worldwide are under threat from such stresses as disease, habitat loss and pesticides has sparked interest in creating pollinator sanctuaries. “Farmers are constantly working to improve their knowledge and understanding of what is happening in the soil, and with the plants and the whole ecosystem,” says Jamie Puchinger, the assistant manager at Farming Smarter, an applied research organization.

“Farmers recognize that pollinators are important to our industry in particular. And they are interested in helping to conserve pollinators and in seeing what they can do on their farms, and using areas that are not prime production land.

“So, if we find some pollinator-friendly seed mixes that can go as reclamation on an oil-and-gas service road, or as a buffer strip around a slough, or as soil cover for pivot corners, or things like that, then farmers could add extra plant species to enrich the biodiversity in those areas.”

Puchinger, who is leading the project, explains that pollinator sanctuaries could provide multiple benefits. “Some of the benefits we are looking at are: conserving our natural insect pollinators, of course, and with that we can also enhance local biodiversity, promote soil conservation, and provide some year-round habitat for other wildlife species, and there is also the potential for these areas to be used as additional forage for livestock.”

So, for best results, pollinator plant stands should provide an ongoing food source for a diversity of local pollinators throughout the growing season. And the stands should also be easy for farmers to establish and maintain for multiple years under the local growing conditions, and should provide good soil cover, livestock forage, and habitat for local species of reptiles, amphibians, birds and mammals.

The project is a one-year pilot study funded through the Canadian Agricultural Partnership. The overall objective is to develop suitable pollinator mixes that can be used for the maintenance of pollinator populations in southern Alberta. The fieldwork took place in 2019 at a site with Dark Brown soil in the Lethbridge area.

The three custom-made pollinator mixes were designed by Saikat Basu, a field agronomist working on the project. He says, “The annual mix has annual clovers, vetch and Brassica crops. The perennial mix has crops like alfalfa, sainfoin, perennial clovers, sweet clovers and perennial grasses. And the annual/perennial mix has a combination of both.”

Basu explains that he focused on using agricultural crops in these mixes for several reasons. “My experience in surveys and field research indicates that wildflower seeds are difficult to establish, expensive and not easily available, and they run the risk of becoming weeds. Furthermore, since they do not have much commercial value, they are not preferred by our farmers.

“In contrast, the crop seeds are easily available, easy to establish and comparatively cheaper. [Many pollinating insects will feed on the pollen and nectar provided by the legume and Brassica crops in these mixes.] Plus these mixes provide more than just benefits for pollinators. Several of the crops have value as forage for livestock and as cover crops to prevent soil erosion and to provide phytoremediation. Many of the crops are very competitive with weeds and can grow in places that are less suited to regular crop production, such as areas along fencelines and roadsides, areas that are hard to reach with farm equipment, and areas along water bodies and irrigation canals.”

Puchinger and her team collected data on such factors as: plant emergence dates, plant density, canopy closure, survival of the different species in each mix, crop biomass and heights, and weed counts and biomass.

They also monitored flowering timing in the plots to establish a floral calendar for southern Alberta conditions and to see which plant stands would be better at providing a continuous source of pollen and nectar throughout the season.

As well, they used sticky cards to sample the insects visiting the plots. This winter, an insect taxonomist will be identifying the species of bees and other insects on the cards.

Although Puchinger and her team haven’t analyzed the data yet, their field observations provide an initial look at what happened during the growing season. From what Puchinger saw, almost all the mixes planted at the first seeding date turned out really well; however, the wildflower stand was spotty. “Growing native flowers from seed is tough, so getting them established is more of a challenge than getting our commercially grown crops to establish.”

Basu saw many different pollinators visiting the plots. “I found a wide diversity of bees, including honeybees and native bee species such as the Nevada bumblebee, orange-belted bumblebee, brown-belted bumblebee, mining bee, and sweat bee, which are all common in southern Alberta. There were also moths and butterflies such as checkered butterflies, pollinating beetles such as black blister beetles, and flies like hover flies and drone flies.”

Puchinger says, “Once we dig into the data this winter, we can see which stands were most successful, which of the treatments provided the longest window for foraging by pollinators, and those kinds of things.”

Then Farming Smarter will look at preparing a grant application for a new project to investigate this topic a little more deeply. In particular, they are interested in the possibility of expanding the project into different parts of Alberta to find mixes that work well in other regions.

Puchinger is hopeful that the pollinator mixes composed mainly of commercial crops will make it easier for Alberta farmers to increase pollinator habitat. “A lot of these crops are being grown in the different regions of Alberta anyway. So, you’re just adding some plant diversity each year, to enhance the stand’s value for pollinators and the environment.”