Planting specific bean varieties together in a field could boost yields and enhance sustainability. 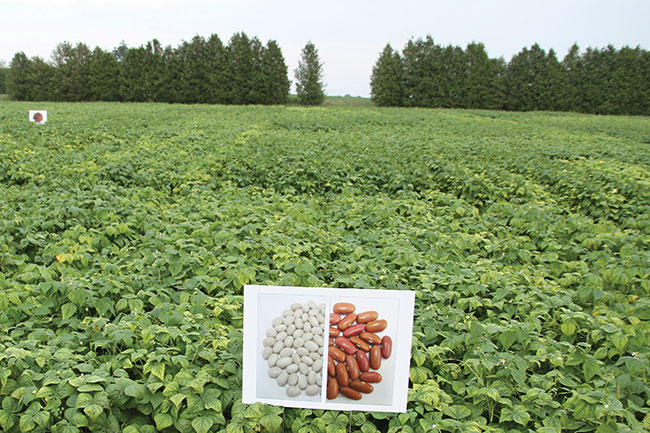 Peter Pauls is leading a study to investigate the effects of planting different bean varieties together in a field. Photos courtesy of K. Peter Pauls.

Genetic diversity can improve the resiliency and sustainability of agricultural systems. An Ontario study is investigating this by examining the possible agricultural and ecosystem benefits of different dry bean variety mixtures.

Research has shown that mixing crop varieties in a field can have production benefits like improved disease management, water-use efficiency or yield stability. You can probably imagine how such mixtures might provide advantages.

For instance, let’s say you are growing a high-performing variety but it is susceptible to a disease that decimates the yield in your field one year. If you grow that variety in a 50:50 mixture with another elite variety that has somewhat different traits including resistance to this disease, then half of the plants in the field would not be affected by the disease. Also, with fewer susceptible plants in the field, perhaps the pathogen’s spread might be slower, which might reduce disease impacts on the susceptible variety. Or perhaps some other characteristic like the canopy shape of the second variety might make the field’s microclimate less favourable to the pathogen, which again might help the susceptible variety.

Similarly, increased genetic diversity in an agricultural landscape can contribute to a resilient, healthier landscape that can withstand challenging growing conditions and provide enhanced ecosystem services. For example, greater plant diversity in an area might support more productive soil microbial communities and higher populations of beneficial insects, such as pollinators.

The study’s first year, which was 2017, provided a great example of how a bean variety mixture might benefit a grower. “[In one of the study’s treatments,] we planted a black bean and a white bean in alternate rows. We had a heavy rain shortly after the crop was established, and in some spots the conditions were very wet. The black bean variety was quite susceptible to that flooding damage, but for the white bean variety the wet conditions didn’t matter at all. So crop establishment in the black bean rows was very poor, while in the white bean rows it was just fine,” he explains.

“That’s the kind of genetic flexibility you can build in when you plant a variety mixture. And often the bean crop then compensates by filling in the holes. So in this case the white bean would have filled in the holes that the black bean had left. If the whole plot had been in that black bean variety, there would have been very little yield.”

He adds, “Essentially, with a variety mixture, you’re building in some insurance, because you just don’t know what the environment will bring over the course of the growing season, and even within a field there are differences in the ways in which the plants are challenged.”

Which mixtures are best?
The four-year, small-plot study is comparing Ontario bean varieties grown as mixtures and as pure stands. The varieties are mostly from the University of Guelph’s bean breeding program. Pauls and his research group are collecting data on characteristics like plant height, days to maturity, seed weight, photosynthetic activity and yield.

In 2017, they had one site at the Woodstock Research Station and one at the Elora Research Station. At each site, they grew four varieties – Lighthouse (white), Rexeter (white), OAC Vortex (ACUG 15-B4, black) and OAC Inferno (light red kidney) – as pure stands, as mixtures of pairs of varieties grown in the same row, and as pairs grown in alternate rows.

Pauls notes, “For that first year, we just asked: is there a downside to mixing? For example, would a mixture consistently yield lower than the pure varieties?”

The Year 1 results showed that the mixture yields were usually as good as or better than the mathematical average of the yields of the two pure stands.

So starting in 2018, Pauls and his group expanded the study to work on finding the best yielding varietal combinations. They increased the number of bean varieties to seven, adding Bolt (white), Dynasty (dark red kidney) and Red Rider (cranberry) to the four varieties selected for Year 1. As in Year 1, they grew the varieties as pure stands and as all possible pairings in same-row mixtures and alternate-row mixtures.

They also increased the number of field sites, with one at Woodstock and two at Elora. “The Elora Research Station is big enough that you can put one site at one end and another site at the other end and they are in quite different conditions. And we planted the two Elora sites at different times so that they would be in somewhat different growing environments,” explains Pauls.

The 2019 mixtures were planted only as same-row mixtures. Pauls says, “We decided to just go with same-row mixtures because that would likely be the simplest way for a grower to handle it. You could just put the seeds in the bin together, making sure to compensate for the weight differences so that you end up with an equal mixture.”

The study’s final field season will be in 2020.

Along with assessing the yield effects of the bean variety mixtures, Pauls and his group are collaborating with other University of Guelph researchers to explore some possible ecosystem benefits of the mixtures.

Kari Dunfield and her group in the School of Environmental Sciences have collected soil samples for an initial look at whether the soil microbial communities differ between the pure plots and the mixtures. And Dirk Steinke and his group from the Department of Integrative Biology set up traps to determine abundances of aboveground insect species in the pure stands, mixed stands and hedgerows.

“There are lots of bees and other insects in those plots; it would be interesting to know whether the variety mixtures have benefits to pollinator diversity and other beneficial insects,” Pauls says.

Pauls also hopes to work with Clarence Swanton, a weed scientist at the University of Guelph, to better understand the bean variety interactions. “Clarence has looked at interactions between weeds and crops that are mediated primarily by light communication, light quality bouncing off of the leaves.” This same mechanism could be important in determining whether specific bean varieties help each other or compete with each other. 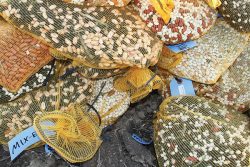 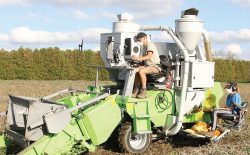 Seeding certain bean varieties together could have agricultural and ecosystem benefits.

Promising combinations
The findings so far look promising. “There are some variety combinations that seem to be consistently better than the mathematical average of the yield of the pure stands, over at least two years in multiple locations,” Pauls says. “Some of those combinations are within a market class, and some are across market classes.”

He points out another interesting aspect: “If the driving factor in mixture performance is just genetic diversity, then I would have anticipated that more of the mixtures would have performed well. So I think it is probably the specific interactions between the individual varieties that determine whether a particular mixture results in a benefit or not.

“So, based on the results so far, it seems that one has to do the work to identify the specific combinations that work well together.”

He also notes, “If using varietal mixtures is something that bean growers would be interested in adopting, then it would very much change the way in which we would evaluate breeding lines for possible variety registration. We would want to evaluate them in combinations with existing varieties, which we don’t normally do now.”

Pauls says the next logical step after this current study would be to scale up the research to on-farm trials. Working with grower co-operators to evaluate the variety mixtures in plots that cover several acres and where the co-operators are conducting the field operations would provide a good test of how the mixtures perform under practical conditions.

If variety mixing is going to be adopted, then initially the mixtures would probably be within a market class, as that works with the existing bean handling system. “For instance, when navy beans are harvested in Ontario and collected at a place like Hensall Co-op, they don’t keep one navy bean variety separate from another. They mix them all together,” he says.

If growers become interested in mixtures of different market classes, “then we would have to ask the question: is there a market for that kind of bean mixture, or do we need to separate them after harvest?” Pauls says. That separation could be done with sieves and colour sorters, but it would add a cost. “So another question would be: is the benefit that the mixture might bring in the field worth that extra cost?”

By the end of his current study, Pauls hopes to be able to recommend some variety mixtures that, on average, would benefit bean growers compared to growing single varieties. As well, he hopes this research might also speak to consumers who are asking questions about the environmental footprint of food production.

He explains, “Producers are very interested in preserving their basic resource, the farming environment, the soils and the surroundings, but that is not always obvious to a consumer who doesn’t have a lot of experience with the farming community. So we want to also be engaged in research that addresses those types of questions so that consumers can have confidence in our food production systems.”

This study is funded through the Food From Thought research program, which receives support from the Canada First Research Excellence Fund. It directly supports the position of Yarmilla Reinprecht, who is the research associate in Pauls’ group responsible for carrying out the mixture research, and another Food From Thought study focused on nitrogen fixation in beans. The field studies also rely on technicians Tom Smith and Lyndsay Schram, and other part-time employees and equipment involved in Pauls’ bean breeding program, which is funded by the Ontario Bean Growers and Agriculture and Agri-Food Canada, and on field sites and equipment supported by the Ontario Ministry of Agriculture, Food and Rural Affairs.