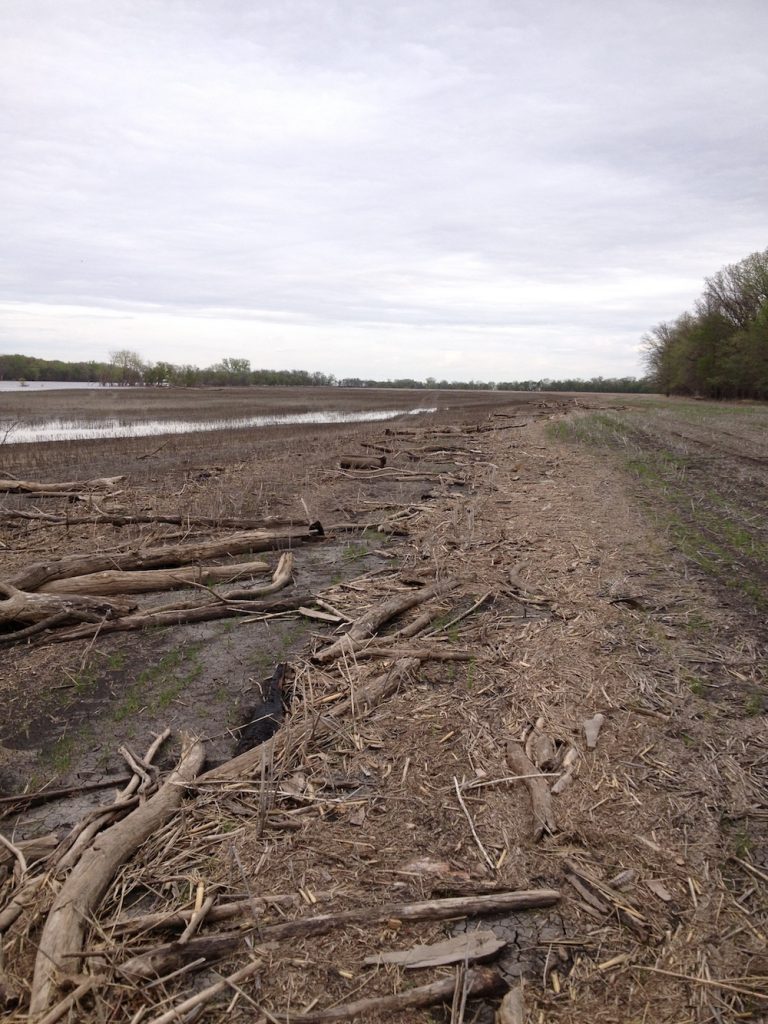 Debris cleanup can add up to 100 hours for 100 acres, or longer. Photo courtesy of David Hamblin.

Spring signals the start of the farming season, traditionally the season of new growth and potential. But in some parts of Western Canada, spring can also be a euphemism for flooding season, seeding delays and lost yield potential.

Apart from seeding delays, there can be many negative impacts of flooding on farmland.

According to Myron Kroeker, an agronomist for Rosenort Agro, these impacts can include soil compaction, which means reduced water infiltration, slowing down drying, as well as a less desirable seedbed for planting which can reduce crop emergence. Floods can also cause erosion, especially along the rivers, and sediment deposits can block surface drainage.

Depending on the topography of the ground, says David Hamblin of Red River Seeds in Morris, Man., erosion can strip the soil and leave areas in need of repair but difficult to access. “It also tends to pile straw and debris in some areas so you always have a cleanup after,” he says.

The cleanup could range anywhere from 10 to over 100 hours per 100 acres, Hamblin says. “Four people for 10 hours on the low end or four people for 25 hours isn’t uncommon,” he says.

After significant flooding, drains need to be remade to fix blockages caused by sediment and silt buildup, with costs sometimes totaling $10,000 per field. 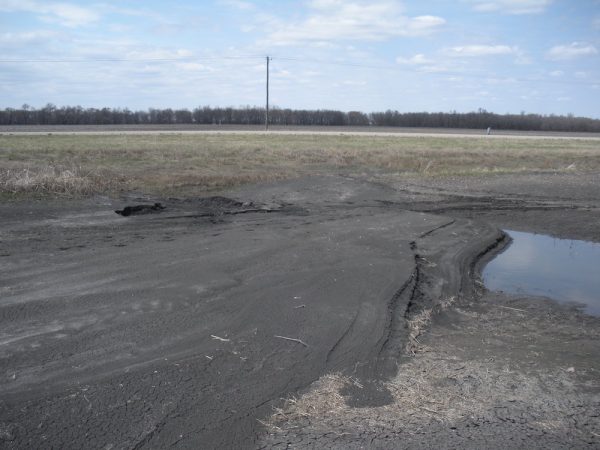 In some cases, if drains or ditches are clogged, farmers can speed field recovery by removing blockages with tractors or ATVs, but if there’s significant sedimentation in surface drains, excavation equipment might be required, Kroeker says.

But Hamblin says it’s mainly a waiting game while the river goes down.

“In some cases it’s a matter of time, which is tight at that time of year, until you can get it cleaned up. Sometimes flooding can leave trash and silt and sediment in the mud and it’s tough to work with. You either have to push it into piles and deal with it later on or you work around it and hope for a dry summer so you can deal with it in the fall,” he says.

Once floodwaters recede, farmers have to be careful not to get on fields too soon to avoid compacting the soil further.

Once floodwaters recede, farmers have to be careful not to get on fields too soon to avoid compacting the soil further.

In the Red River Valley, 1950, 1979, 1997 and 2009 saw floods that covered large areas and affected the general public via road closures, but major flooding with impacts on farmland productivity and seeding delays affects farmers every two to three years, Hamblin says.

Farmers are used to the possibility of floods, in other words—but beyond building flood risk into their insurance portfolios and proofing structures and equipment against floods, there’s not much they can do to prepare. 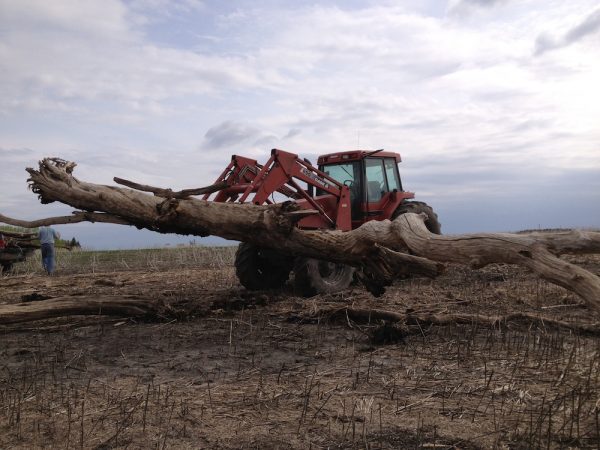 Flooding can leave trash, silt and sediment in the mud that’s difficult to work with. Photo courtesy of David Hamblin.

Hamblin says it’s a myth that sediments can be good for farmland. “If you get a flood every decade or two it’s quite different and your soil structure is better and you leave a little more of that but if it’s happening more often it’s hard on the land,” he says.

“It’s a myth that sediments can be good for farmland.”

More often than not, soil build-up in one part of a field represents erosion from another.

Typically, floodwaters strip nutrients rather than adding them—and these nutrients end up downstream in water bodies. “The environmental impact tends to be greatest if the manure or fertilizer was broadcast on the surface and incorporated,” Kroeker says.

Over the last 10 to 15 years in the Morris area, producers have reduced their fall fertility programs due to the risk of flooding, Hamblin says.

Kroeker says that while lost nutrients need to be replaced, farmers also have to balance inputs against the decreased yield potential associated with late seeding. “Phosphate availability can be an issue, soils tend to be cold and compacted reducing root exploration, reducing P uptake. A starter P fertilizer will help mitigate the effect of flooding,” he says. “But if seeding is delayed until the end of May, fertility rate recommendations are generally reduced. Also, nutrients like P are more available with rapidly warming soils, so less P is needed.”

Hamblin adds that if farmers are seeding after May 10 their yield expectations drop significantly (although some crops, like canola, perform better when planted in the second half of May). “In most cases we’re not dropping fertility requirements based on the water but on the calendar,” he says.

Justine Cornelsen, an agronomy specialist for the Canola Council of Canada, says canola requires adequate moisture for fertilizer response and yield in canola, but canola roots in fields with excess moisture can’t access nutrients even when plenty of nutrients are available.

Cornelsen points to guidelines on the Canola Council website for specific N and P fertility recommendations for canola under excess moisture conditions. “Depending on how nitrogen was applied and the source, excess moisture can cause N leaching; look at inhibitors/slow release products to minimize the impact,” she says.

“With phosphorus being immobile in the soil, it still needs to be placed close to canola to allow for the initial pop-up effect in wet years; in dry years, high rates of P fertilizer can cause damage to the seed so it comes back to the 4R nutrient stewardship and soil conditions.”

Debris cleanup can add up to 100 hours for 100 acres, or longer. Photo courtesy of David Hamblin.

Seeding after a flood

Once floodwaters recede, producers are generally eager to get on the field as soon as possible. According to Brunel Sabourin, owner of Antara Agronomy in St. Jean-Baptiste, Man., producers in flood-prone areas tend to be prepared to cover a lot of acres in a short period of time.

“They have seeding tools for every condition. Many will also resort to broadcast seeding certain crops like canola to cover more acres in a day. Some use custom application to apply seed and fertilizer then incorporate it with a heavy harrow while others have mounted application kits on their harrows to broadcast seed in the same operation. With a heavy harrow one can easily seed between five and 700 acres a day,” he says.

But many producers get proactive even before they get on the field by reworking their rotations, moving cereal acres onto fields they can seed in a timely fashion and shifting canola or other later-seeded crops onto flood-prone land, Sabourin says. “We have a better chance at achieving high yields in canola when seeded in late May or early June, versus a wheat or oat crop.”

Herbicide recropping restrictions and fertility regimes will definitely inform these rotation changes, he adds. “This may mean cheating a little on rotations—i.e., the same crop on a field two years in a row—but our crop rotations are generally diversified enough that we can afford to do this.”

It’s not uncommon to see low-lying parts of fields unseeded following flood events, Sabourin says, but a pass with a heavy harrow or vertical tillage unit through these areas can help them dry enough to get them seeded in a day or two. “But a small percentage of acres just might not get seeded,” he says.