August 20, 2019
By Sponsored by Corteva Agriscience 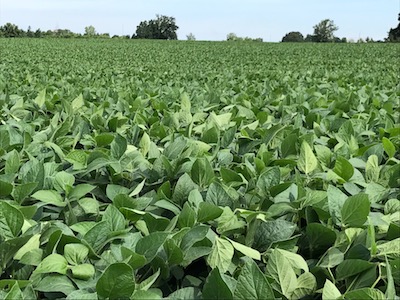 Enlist E3 soybeans will be available to growers for the 2020 growing season.

With many factors to weigh and consider, choosing the best soybean variety for your farm is a balancing act, but it is a key contributor to your soybean production success. Variety performance trial data, on-farm strip trial data and seed company information are all good resources to help you choose among the varieties suited to your area’s maturity group and heat units. But still, there are several aspects to consider when selecting varieties for your next season.

“You need to balance yield performance in combination with a defensive trait package that includes criteria like tolerance to major diseases, along with characteristics such as good standability and seed quality,” says Jeff Loessin, the category leader for corn, soybean, cereal, and forage seed with Corteva Agriscience in Canada.

This year, producers have a new system to consider, with the launch of Enlist E3 soybeans in Canada from Corteva Agriscience.

“We have been growing our E3 soybeans in testing and seed production in Canada for several years,” Loessin says. He notes the varieties offer elite genetics, including a wide range of traits for fighting off diseases like Phytophthora root rot, white mould, and soybean cyst nematode, as well as excellent harvest traits.

With the Enlist E3 system joining the pool, Loessin advises considering the following four options when selecting a herbicide-tolerance system.

Enlist E3 soybeans contain herbicide tolerance to 2,4-D, glyphosate and glufosinate. Safety for the crop being treated, as well as adjacent crops that may be affected by herbicide drift, is an important consideration, and the near-zero off-target movement for the Enlist weed control system may be attractive to Eastern Canadian farmers.

For producers in Western Canada, choosing a system that can help manage key weeds is a definite benefit. “Volunteer canola is one of the most challenging weeds to control in soybeans in this region,” Loessin says, also acknowledging wild buckwheat, dandelion and sow thistle as problematic weeds for producers in Western Canada. He says Enlist E3 soybeans can help to mitigate this challenge, regardless of the canola herbicide system.

“In Eastern Canada, glyphosate resistance is a major concern,” Loessin adds. “Enlist E3 soybeans can be an excellent tool to tackle hard-to-control, challenging weeds, like Canada fleabane and waterhemp. Using a program approach that includes products with additional modes of action is recommended, and Enlist Duo provides the control needed for in-crop weed control for weeds like field horsetail – a challenging weed in eastern Ontario and Quebec.”

Adding another tool to the toolbox, Corteva has developed its Enlist Duo herbicide for use on crops with the Enlist trait. This herbicide is a combination of 2,4-D choline and glyphosate, providing control of tough broadleaf and grass weeds. Enlist Duo with Colex-D technology is designed to land and stay on target, and when combined with best application practices, the company says it provides near-zero volatility and reduced potential for drift.

Choosing a variety that has consistently good yields year after year – despite the crazy weather we sometimes get – is always a good idea. But if you run into a cold, wet spring that significantly delays seeding, should you go to a soybean variety with fewer days to maturity?

“Generally, we would recommend against switching to an earlier maturing soybean in that situation,” says Dave Harwood, technical services manager with Corteva Agriscience. “However, every case is unique. There would be several considerations, like: How late is planting actually going to be? Is wheat planned for fall planting?”

A rule of thumb for soybean is that a three-day delay in planting translates to a one-day delay in maturation. However, Harwood explains, “in general, soybeans adapt to later planting through their daylength sensitivity. They begin to flower when nights begin to lengthen after the summer solstice, and they begin to drop leaves as the nights get even longer in September.”

Loessin points to yet another factor to think about: “When considering your soybean seed source, don’t forget the seed-applied technology side of the equation. Enhanced fungicide protection and insect control, if warranted, should be parts of the decision process.”

“For 2020, Enlist E3 soybeans are available across most maturity groups used in Canada,” Loessin says. “Initially, more varieties will be available to growers in Eastern Canada, where soybeans are predominantly grown; however, growers in Western Canada will have a selection of Enlist E3 soybeans to choose from. In the coming years, the choices of varieties will expand with each season to include a full range of maturities.”

If Enlist E3 soybeans are the right choice for you, talk to your seed supplier early to secure the variety that best fits your farm operation. For 2020, Enlist E3 soybeans will be available from seed brands that have licensed the technology in Canada, along with Brevant seeds and Pioneer-brand seed from Corteva Agriscience. As of summer 2019, the licensee brands include: Prograin, NorthStar Genetics, Thunder Seed, Legend Seeds, PROSeeds (Sevita International), Elite Seeds, CROPLAN (WinField United), and Syngenta. More seed brands are currently in the process of becoming licensees of the technology.