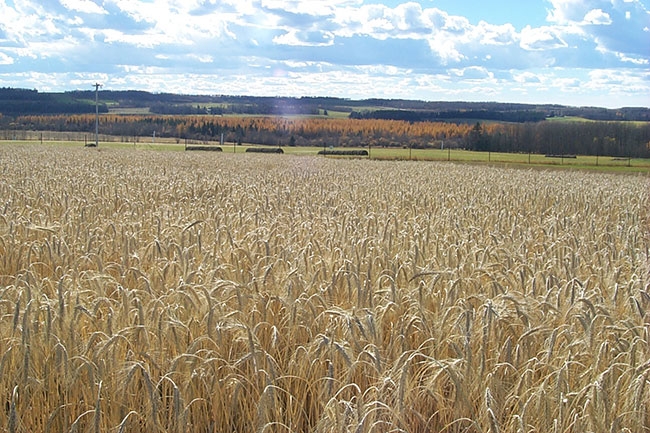 : Field study comparing crop rotations at the Breton plots. Over the long-term

“We took the opportunity to build on the long-term research studies at the University of Alberta Breton plots near Edmonton, and study the effects of long-term management on N cycling, soil properties and productivity of rotation,” explains Miles Dyck, associate professor with the faculty of agricultural, life & environmental sciences at the University of Alberta. “The main objective was to assess the effects of long-term rotation and fertilization on growing season [N2O emissions, N2O emission intensities, soil carbon (C) and N] stocks and their relationship to crop N uptake and productivity.”

The field study, initiated in 2013, was conducted over five growing seasons comparing two contrasting crop rotations: a two-year wheat-fallow, and a five-year wheat-oat-barley and two years of perennial alfalfa-brome hay. Dyck notes that these rotations, which were established in the 1930s, represent both ends of a rotation spectrum in terms of crop diversity and input intensity, and that the rotations most growers currently follow will likely be somewhere along this spectrum. Long-term fertility treatments included check, manure, NP (phosphorus) K (potassium) S (sulphur), NPK, and PKS fertilizers.

“We compared the wheat crop phase in both rotations, measuring N2O emissions during the growing season, wheat yields and crop N uptake,” Dyck says. “We also included some long-term data from the Breton Plots, providing about 10 years of recent data for comparison. Overall, the results showed that rotation was probably the most significant factor affecting cumulative growing season N2O emissions in the wheat crop. The five-year cereal forage rotation generally had higher growing season emissions, however the emissions are offset by increased productivity and reduced fertilizer input. Overall, the cumulative N2O emission intensities were comparable between the two rotations.”

Dyck adds, that for a long time, the emphasis has been on ensuring adequate P fertilizer so crops could use N more efficiently, but this study emphasizes the importance of ensuring other nutrients such as S be available in adequate amounts to help maximize N uptake and yields. Growers already ensure canola crops have adequate S, but this project shows that other crops like wheat have moderate S requirements, and the S demand of other phases of the rotation should be considered as part of a sound nutrient management strategy. Although the fertility treatments were not statistically different, the NPKS soil fertility treatment in the five-year crop rotation had the lowest N2O emission intensities. This suggests that long-term balanced fertilization addressing all nutrient deficiencies will likely reduce N2O emissions intensities through increased crop yields.

“Growers who are interested in taking a long-term approach to nutrient management in their cropping systems will benefit from long-term monitoring of the nutrient [NPKS] budgets in their fields,” says Dyck. “Keeping field records of annual fertilizer applications and crop yields, along with regular soil sampling can help estimate the amount of nutrients removed from every field. Combining this information with the current 4R best practices (right source, right rate, right time, right place) will help to match fertilizer applications to nutrient demand from crops over the long term and reduce environmental losses. More diverse crop rotations, especially when pulses are included, seems to influence the N balance and ability for the soil to supply N to cropping systems. Our results suggest that long-term crop rotation and balanced soil fertility treatments that increase yield, crop N uptake and reduce N2O emission intensity should be considered best management practices.”