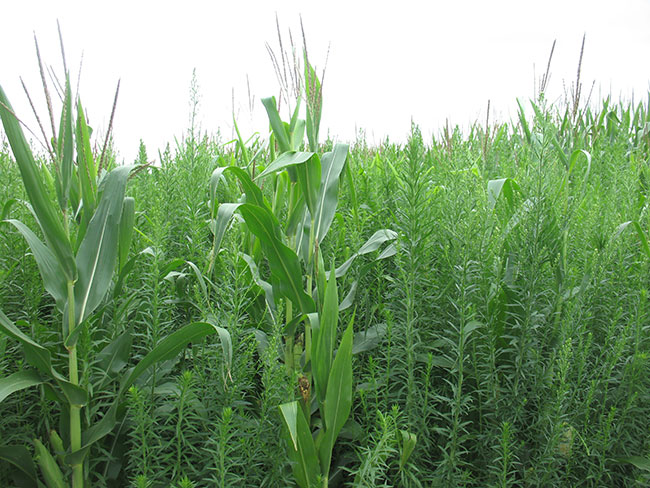 Cover crops can’t be used as the sole management strategy for weeds in field crops. But as one strategy in an integrated management approach, they show enormous promise, according to University of Guelph professor Peter Sikkema.

“I’ve been working in weed science for 25 years. My research program has been largely focused on herbicides,” Sikkema says.

Two years ago, Sikkema’s graduate student Taiga Cholette published a study looking at suppression of glyphosate-resistant (GR) Canada fleabane in corn with fall-seeded cover crops after winter wheat combining. Of the 15 graduate students Sikkema has supervised who have worked on glyphosate-resistant weeds, Cholette was the first to look specifically at cover crops as a weed management tool.

“Farmers need greater than 95 per cent plus control, so this is not a standalone strategy, but Taiga’s data suggests that cover crops are one component of an overall weed management strategy,” Sikkema says.

“The fact that we’ve relied on herbicides to the exclusion of other weed management tactics has led to widespread herbicide resistance. I’m not throwing darts at anybody because that was considered the best science for 50 years, and I’d have to throw them at myself as well. But I think for long-term sustainable crop and weed management, we need to get more diversity into our weed management programs.”

Study design and results
The experiment was conducted in southwestern Ontario over three years, from 2015 to 2017, and included seven site-years. Studies started when cover crops were seeded after winter wheat harvest in late summer, and completed after corn harvest the following year.

GR Canada fleabane suppression in corn was assessed visually in mid-May and early June, July, August and September, with researchers also evaluating Canada fleabane density and biomass at the beginning of July.

The most logical place for cover crops in Ontario, he says, is after winter wheat combining in a corn-soy-wheat rotation; the benefit is reduced GR Canada fleabane in the subsequent corn crop.

Suppression of glyphosate-resistant Canada fleabane in corn with a cover crop of cereal rye and crimson clover. Photos courtesy of Peter Sikkema.

Ongoing research
Ted Vanhie, a master’s student working with University of Guelph professors François Tardif and Clarence Swanton, began a project in May 2018 that also aims to assess the effectiveness of cover crops for Canada fleabane suppression.

Vanhie’s project has four objectives: to validate the suppressive effect of cereal rye against Canada fleabane, to compare rye’s performance to that of other cereals, to evaluate control of Canada fleabane when rye is used in combination with chemical and cultural weed control methods, and to look into the mechanisms responsible for rye’s control of the weed.

This experiment was organized in a split-strip plot design and looked at control of Canada fleabane with a rye cover crop used in combination with herbicides and/or tillage. For herbicide treatments, Vanhie applied dicamba, saflufenacil and 2,4-D in the spring. Three tillage intensities – no-till, aggressive tillage and passive tillage (a method that disturbs fewer soil aggregates than aggressive tillage) – were compared.

Vanhie says the study’s results are still being evaluated, but he’s comfortable saying that rye did suppress Canada fleabane.

Vanhie did observe better control of the weed when rye was used in combination with tillage in 2018, although the effect was less consistent in the second year of the study.

Control improved with the addition of an herbicide, particularly dicamba; Vanhie noted that 2,4-D did not provide adequate control to justify the cost of application.

While it’s too soon to make specific recommendations, Vanhie says the use of a rye cover crop is very promising – and not just for its efficacy against weeds.

“Oftentimes we come up with strategies to manage weeds but we can overlook costs,” he says. “As part of an integrated management strategy, this is a cost-effective system.”