Harvest weed seed control is a last-ditch line of defence against herbicide-resistant weeds in Australia and one many producers there would rather not have to deploy in the field. 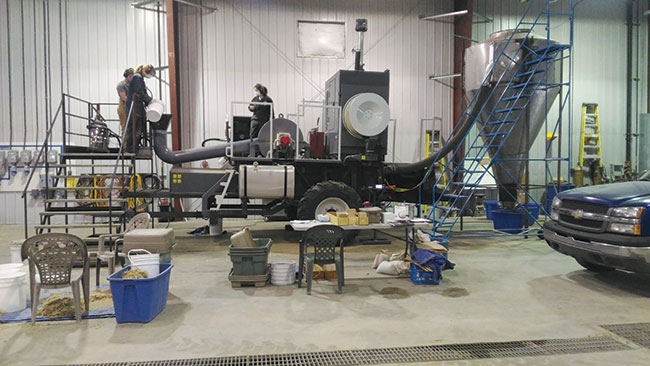 Tidemann working with the Harrington Seed Destructor indoors in a stationary threshing study. Harvest weed seed control is a last-ditch line of defence

But in extreme cases of herbicide resistance, harvest weed seed control (HWSC) methods are the only control measures remaining to producers. What’s more, they are proven to work in Australia, which means they merit investigation in areas where herbicide resistance is on the rise.

In Western Canada, a number of recent, high-profile studies have looked at seed retention and seed shatter of economically important weed species as part of an effort to gather data assessing whether HWSC is a viable option for producers.

Breanne Tidemann, a research scientist in field agronomy and weed science for Agriculture and Agri-Food Canada (AAFC) based in Lacombe, Alta., was the lead on a study completed last year that looked at seed retention of three weed species – wild oat, volunteer canola and cleavers – as well as height of seed retention. Both factors are key when assessing whether these weeds can be controlled using a Harrington Seed Destructor (HSD), a machine designed to be pulled behind a combine to collect chaff and destroy weed seed during harvest. If seeds are produced at ground level, they cannot be processed by the HSD.

Tidemann collected six site-years’ worth of data from three locations, two in Alberta and one in Scott, Sask. She found that, on average, 84 per cent of cleavers were retained at swathing and 60 per cent at straight cutting of wheat. The team used fababean harvest timing as the latest measure in the study, and found that volunteer canola had retention of 94 per cent on average, even that late in the season.

By contrast, wild oat lost seeds quite early in the season, Tidemann says, with about 56 per cent of seed, on average, retained at the time of wheat swathing.

“In terms of height, wild oat and volunteer canola were in the highest above-ground fraction that we tested, so those retained seeds can be easily collected; they were above 45 centimetres above ground levels. That bodes well for getting them into the combine,” Tidemann says. For cleavers, the team saw a minimum of 70 per cent of seeds in the collectible fraction.

“So what we’re saying is that the height of seed retention won’t be a constraint to using the HSD,” she explains.

As part of her master’s thesis work at the University of Saskatoon, Nikki Burton, who now works for BASF Canada, completed both a small-plot study and a two-year field study evaluating seed shatter of wild oat, green foxtail, wild mustard and cleavers in both an early (field pea) and late (spring wheat) maturity crop in field experiments at Scott.

Harrington Seed Destructor
Tidemann has also worked with the HSD indoors in a stationary threshing study; field trials will follow over the next three years in central Alberta.

“In Australia they’ve looked at bigger seeds like wild radish. What about kochia or green foxtail? If you have a heavy weed patch, how well would the HSD work then? Those were the types of questions we were asking,” Tidemann says.

The short answer to those questions is that Tidemann’s team saw a statistical difference in how the HSD managed weed seeds, but not much of a practical difference.

“One example is that we went from running seeds through without any chaff, to running seeds through with eight five-gallon pails of chaff, just to look at whether a heavy crop going through the HSD impacts how it destroys seeds,” she says. “We did have a statistical difference, but my range of control was between 98 and 99 per cent. So the stats are finding differences, but does a producer care if they get 98 or 99 per cent control? Probably not – it’s really good control.”

Tidemann’s conclusion is that the HSD is effective for most seeds that could be fed into the machine, but getting the seed into the
machine will be the problem for some species, like wild oat.

“That’s the tricky part of the equation, dealing with your weed biology and your system, and knowing which weeds you can actually target,” she says. “It won’t be as effective on every weed species.”

More research is needed to assess how producers can best deploy HWSC methods like the HSD in the field, Burton cautions, adding that all weed control methods need to be used in an integrated weed management system and shouldn’t be used as standalone measures against herbicide resistance.

Though HWSC measures are hardly used in Canada, Tidemann says their uptake is increasing in other parts of the world, particularly Australia, and also the United States, where herbicide-resistant Palmer amaranth is spreading.

“As people are dealing with resistance, some alternative methods are starting to look more and more appealing.”