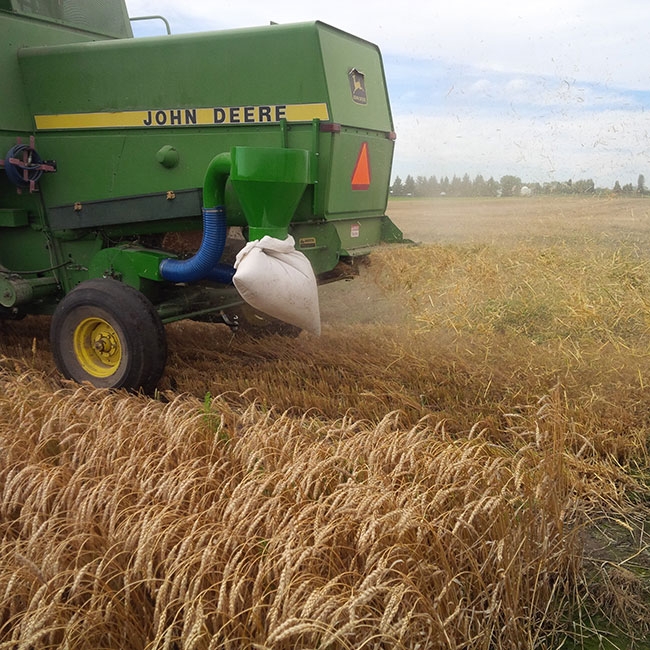 Test 43 followed, incorporating more diverse rotations with various annuals, perennials (alfalfa), winter annuals and early cut silage, comparing competitive seeding rates, with and without herbicides, for wild oat control. The study found that early cut barley silage, or two years of an increased seeding rate of cereals with no herbicide could control wild oat as good as or better than a canola-wheat rotation with 100 per cent herbicide rates.

“Building on Neil’s successful research results, we launched Test 44 in 2016 to look at multiple weed species and various harvest weed seed control methods as part of an integrated weed management system,” explains Breanne Tidemann, research scientist with AAFC. “We are expanding on Test 43, to determine if chaff collection integrated with other non-chemical weed control methods can provide broadleaf and grass control equivalent to typical 100 per cent herbicide application systems. Chaff collection is being added to simulate harvest weed seed control or moving those weeds out of the crop at the harvest timing.”

“This is a large six-site study across Western Canada comparing all of the same treatments,” Harker says. “The sites include Lacombe, Lethbridge and Beaverlodge in Alberta, Saskatoon and Scott in Saskatchewan, and the University of Manitoba. In 2016, all of the plots were seeded to wheat using increased seeding rates and no herbicides. The various rotation treatments were implemented in 2017 at the various locations, with two more years of rotations, followed by a final year of wheat across all of the plots to be able to analyze comparisons across all treatments for changes in weeds.”

“For the project, we have expanded the weed spectrum beyond wild oat to look at multiple weed species at the various locations,” Tidemann adds. “All sites include a common grass and broadleaf weed, wild oat and wild buckwheat, but then each site selected other problematic weeds to add to their study. For example, in Lacombe we have included cleavers, while Lethbridge has included kochia. There is some flexibility of weed spectrums to be most reflective of each of the six locations.”

Across all sites, chaff will be collected at harvest using the best method at each location, depending on equipment available. “The objective with chaff collection and removal from the plots is reducing the seed bank,” Tidemann says. “This could be accomplished through chaff collection or other harvest weed seed control methods such as the Harrington Seed Destructor, Seed Terminator or other options. We will be focusing on the changes in weed populations over the duration of the project. We are also going to be testing the chaff for feed quality to see if there are opportunities for feeding the different types of chaff to livestock.”

The overall goal of integrated weed management systems, such as Test 44, is the implementation of multiple tools to reduce herbicide inputs, environmental impact, and selection pressure for weed resistance. “Although in the short-term the shorter canola-wheat rotations may seem to be more profitable, over the long-term diverse rotations and integrated crop management are necessary to reduce herbicide expenditures, reduce selection pressure for weed resistance, and to continue more sustainable cropping systems and rotations,” Harker says. “Implementing novel, integrated weed management systems can help mitigate herbicide resistance risk, extend the use of important weed control tools and maximize profitability.” Further research results will be available over the next few years.