"Most of the barley varieties that we grow in Western Canada tend to be malt varieties; growers are hoping to get the extra premium if it makes malting grade. But only about 20 per cent of the acres sown to malting barley each year actually make malting grade,” says John O’Donovan, a semi-retired research scientist with Agriculture and Agri-Food Canada (AAFC). 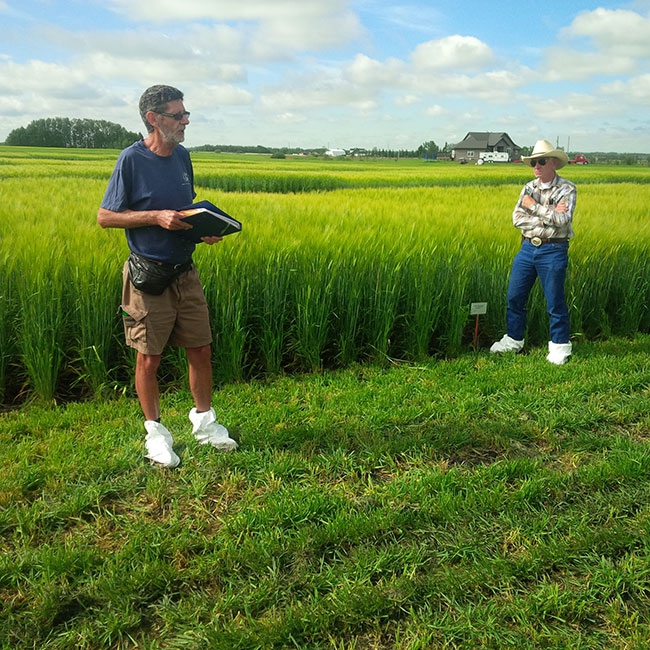 John O’Donovan is leading a multi-site study to evaluate the effects of plant growth regulators on malting barley yields and quality. Most of the barley varieties that we grow in Western Canada tend to be malt varieties

O’Donovan has been investigating various management practices to find options that would improve the chances of achieving malting grade. As part of that work, he is assessing the benefits and risks associated with applying plant growth regulators (PGRs) on malting barley.

PGRs are used to shorten and stiffen plant stems as a way to reduce lodging. “Lodging can be a serious problem in cereal crops. It is usually promoted by an abundant supply of plant nutrients, especially nitrogen, and by heavy rains, strong winds and so on. Some studies have shown that barley can be a bit more susceptible to lodging than wheat, and yield losses in certain situations can be very high,” he explains.

“If we could reduce the incidence of lodging, then overall yield and quality of malting barley may improve, and acceptability for malting grade could increase as well.”

In 2013, the study’s first year, the trials compared two PGRs: ethephon (Ethrel from Bayer CropScience) and chlormequat-chloride (Manipulator from Engage Agro). For 2014 to 2016, a third PGR was added: trinexapac-ethyl (from Syngenta, marketed as Palisade in the United States). “Ethephon achieves height reduction by releasing ethylene, whereas the other two PGRs block the synthesis of a plant hormone called gibberellic acid, which is involved in stem elongation,” O’Donovan says.

No PGRs are currently registered for use on barley in Canada, so growers can’t apply any of these products to their barley crops at this time. However, PGRs are used on barley in various other countries. “Plant growth regulators have been used for many years in Europe. They are routinely used, maybe one to two applications a year, in cereal crops,” O’Donovan says. He suspects one of the reasons that PGR use in cereals has been slow to take off in Canada could be that the crops tend to grow a bit faster here, so staging is especially crucial for PGR applications.

O’Donovan’s four-year study took place at five sites: Lacombe and Lethbridge in Alberta, Indian Head and Scott in Saskatchewan, and Brandon in Manitoba. The barley variety grown in the study was CDC Copeland, a high-yielding malt variety with good lodging resistance. This variety has been increasing in popularity in recent years; the proportion of the total malting barley acres in Western Canada seeded to CDC Copeland rose to 44.7 per cent in 2016, up from 27.4 per cent in 2012.

Marta Izydorczyk at the Canadian Grain Commission is working on the study’s malting quality component. The study is funded under Growing Forward 2, with funds from Alberta Barley, Rahr Malting, the Brewing and Malting Barley Research Institute, the Western Grains Research Foundation and AAFC.

Results so far
Overall, based on three years of data with ethephon and chlormequat and two years with trinexapac, the results are variable.

The yield effects also varied. “For most of the site years, yield was not affected at all by PGR application. This is probably largely due to the fact that during a lot of the years we didn’t see any lodging,” he notes.

The final year for the project’s fieldwork was 2016; data analysis is not yet finished. O’Donovan says, “We’re going to hold off on making concrete conclusions or recommendations until we’ve completed the study, especially in terms of the effects on malting quality.”

However, he offers a few overall thoughts about PGRs on malting barley. “Generally speaking, PGRs are designed to mitigate lodging, so if you don’t have lodging occurring, then PGR application may not be cost-effective.”

Also, he thinks PGRs may have a better fit with wheat and feed barley than with malting barley. “With wheat and perhaps feed barley, growers are interested in applying as much nitrogen as possible to increase the yield. The more nitrogen you apply, the more likely the crop will lodge. So a PGR may come into play in situations where you want to push the yield as high as possible, but that may not be as relevant for malting barley production. Generally, to achieve malting grade, we need to keep the protein level down, so pushing the nitrogen up too high is not a good strategy.”

Other PGR studies on barley crops
O’Donovan’s project is one of several studies related to PGRs on barley in Western Canada. For instance, a project called Barley 180 assessed various advanced agronomic practices, such as plant growth regulators, fungicides, higher seeding rates and extra nitrogen (N), and looked at the effects on yield and return on investment. The project involved side-by-side field-scale trials at various Alberta locations and ran from 2011 to 2014. It included both feed and malting varieties. The main PGR used in this study was Ethrel. Where Ethrel was applied, barley yields increased; those increases ranged from one to 18 bushels per acre (bu/ac), with an average of nine bu/ac.

Steve Larocque, an independent crop advisor and owner of Beyond Agronomy, was one of the agronomists involved in Barley 180. He says, “There is huge value in the use of PGRs in barley. Lodging is the number one factor holding us back from pushing fertility rates higher. Not only do we see yield responses outside of lodging from stem shortening, we see greater net returns from keeping the barley crop standing. High maintenance bills follow after picking up a flat barley crop – lifters, knives, guards, reels, etc. Then you factor in the time wasted going slow to pick up lodged barley. The expenses add up from lodging and PGRs offer a solution.”

Sheri Strydhorst, a research scientist at Alberta Agriculture and Forestry, led a three-year barley-PGR study completed in 2016. In this multi-site, small-plot study, Strydhorst and Laurel Perrott, a master’s student studying at the University of Alberta, looked at the effects on feed barley of various advanced agronomic practices, including Manipulator application, extra N application and foliar fungicides. One component of the study tested 64 combinations of the advanced practices on Amisk, a semi-dwarf variety with good lodging resistance. The study’s other component compared the responses of 10 different varieties to a set of standard practices versus a set of advanced practices. The results from using Manipulator on Amisk showed small but consistent yield increases, modest height decreases at some sites in some years, but no improved lodging resistance, since lodging was rarely a problem for this cultivar. The comparison of the 10 varieties showed the advanced management package resulted in both increases and decreases in height and didn’t usually improve lodging resistance. The variety was key in determining plant height and lodging.

“We certainly need tools to help improve standability of feed barley cultivars. But the PGR treatment used in this study may not be the optimum option,” Strydhorst says. “In a new collaborative study with Linda Hall at the University of Alberta, we are looking at different PGR timings, products and rates on different barley cultivars. Although we still have additional years of testing, preliminary results from the 2016 field trials suggest PGR rates, timings and products can be adjusted to improve PGR performance on barley.”

Engage Agro has been conducting some trials with Manipulator on barley. “So far, our results on barley do show an effect [on reducing plant height]. However it seems that Manipulator is not as effective on barley as it is on spring wheat,” says Tom Tregunno, product manager at Engage Agro.

He adds, “There is still a lot we need to figure out: How much does the barley variety affect the performance of the PGR? Does the application rate need to be higher? Would a split application (which is commonly done in the U.K.) increase performance?”