Soybean production is intensifying across Western Canada, and for producers, managing herbicide-resistant volunteer canola populations can be challenging. Volunteer canola is one of the top abundant weed species in Western Canada and can be very competitive in all soybean crops. 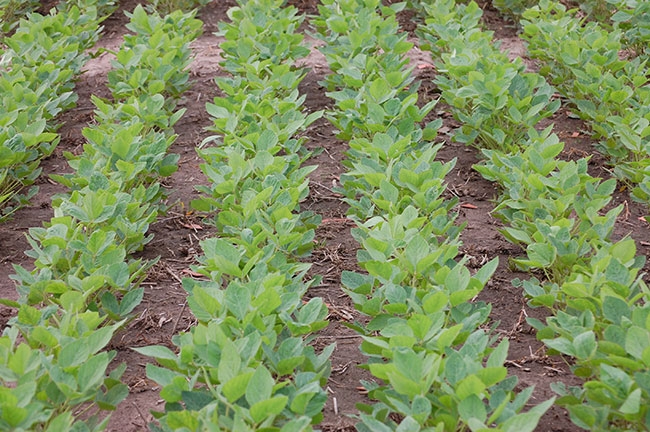 However, researchers have identified weaknesses in the volunteer canola life cycle that can be exploited to manage this weed, and have developed management strategies to help producers grow crops in rotation effectively and profitably.

Rob Gulden, associate professor at the University of Manitoba, and graduate students Charles Geddes and Paul Gregoire, conducted a number of different studies over the past few years to address the challenge of managing this herbicide-resistant weed. They studied a range of agronomic management practices that could be implemented in an integrated weed management (IWM) program at different life stages of volunteer canola to reduce the seedbank numbers and crop impacts.

“In the first study, we examined seedbank management strategies, such as tillage options after canola harvest to minimize seedbank persistence over the first winter,” Gulden says. “Results of earlier surveys from about five years ago showed that producers are still losing a lot of canola seed at harvest, which can greatly add to the weed seedbank. We found that a light and timely tillage pass shortly after canola harvest is a good control point and pretty effective at reducing seedbank numbers for the next spring. Light tillage means a simple harrow pass at the right time to encourage volunteer canola weed seedlings to germinate. Under typical winter conditions, winterkill of seedlings reduced seedbank persistence of volunteer canola in the spring. However, a really late tillage pass just before freeze-up was not as effective.”

Researchers also looked at cultural and mechanical approaches that could be used in an IWM program to make soybean more competitive with volunteer canola. Cultural practices such as row spacing, seeding rates and soil nitrogen (N) levels were evaluated, as well as mechanical approaches including inter-row tillage and mulches. “We concluded from the study that is it very difficult to make soybean more competitive with volunteer canola,” Gulden says. “The main factors that contributed to increased soybean competitive ability were seeding rate and residual soil N levels. Although higher seeding rates didn’t have a big impact on volunteer canola, it did help retain optimum soybean yields. Surprisingly in this study, the effects of row spacing were minimal, however, we have seen positive results in other studies and are continuing to test this strategy. Planting soybean on fields with limited available soil N, and avoiding N fertilizer application in soybean, may provide a competitive advantage over volunteer canola.”

The results of inter-row tillage as an approach showed that although it was not a perfect solution, inter-row tillage did work reasonably well, particularly in wider row spacing. An assessment of living and terminated mulches, both spring wheat and winter cereal rye, were effective at reducing volunteer seed production in soybean without affecting soybean yield relative to without the mulch controls. Unlike rye, living spring wheat mulch developed into an intercrop and produced additional wheat yield at soybean harvest. Overall, IWM techniques were more effective at locations with high densities of volunteer canola seedling emergence.

Researchers also used digital image analysis to see if they could find a relationship between early season total ground cover with increasing volunteer canola densities and soybean yield loss in narrow- or wide-row soybean. The study showed that digital image capture early in the season was effective at predicting soybean yield loss. However, various factors such as soybean row spacing, crop and weed developmental stages at the time of image capture and others suggest that a single, universal yield loss model applicable to all situations may be challenging to develop using early season ground cover data only.

“Overall, results from the various study components confirm that volunteer canola can be a highly competitive weed in soybean production and is relatively insensitive to many weed management tactics, especially at lower plant densities,” Gulden says. “Implementing an integrated approach to weed management at multiple life stages is therefore necessary to manage herbicide resistant volunteer canola populations as soybean production intensifies in Western Canada. Management practices that reduce seedbank numbers remain a top priority. Our study also indicated that reduced soil N, elevated seeding rates, and inter-row tillage in wide-row production systems may be the best integrated weed management options for managing volunteer canola in soybean at this time, but may need to be used in combination with herbicides to target this weed.”