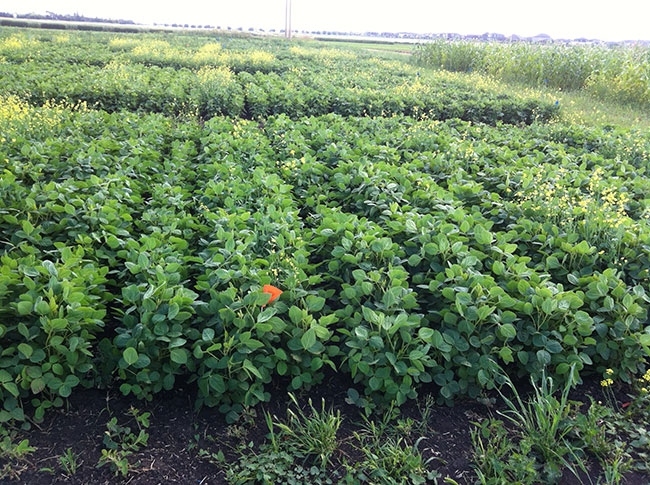 RR canola in RR soybean trials at the University of Saskatchewan in 2014. Soybean acreage is continuing to expand west into Saskatchewan and Alberta.

“We initiated the first research in 2014 when soybeans were first beginning to move westward to look at herbicide options that could help growers better manage those volunteers,” explains Christian Willenborg, associate professor in the College of Agriculture and Bioresources at the University of Saskatchewan. “Working in collaboration with Rob Gulden at the University of Manitoba, our research focused more on herbicide options, while his research focused on cultural control strategies and yield loss estimates.”

“The study results confirmed what we suspected, which was that the combination of pre- and post-emergent treatments provided the best results,” Willenborg says. “If only a pre-emergent treatment is used, in many cases the volunteer canola control is good early on, but because canola tends to emerge throughout the growing season, later emerging weeds are missed. In trials with post-emergent treatments only, very often depending on the product, there wasn’t good enough control of volunteers that emerged early in the growing season. Therefore, it became clear that a two-pass approach was going to be the best to manage glyphosate-resistant canola volunteers in glyphosate-resistant soybeans.”

The combination study compared three pre-emergent product treatments: 2,4-D Ester, tribenuron (Express SG) and saflufenacil (Heat). Five post-emergent products were also compared: bentazon (Basagran Forte), bentazon plus imazamox (Viper ADV), chloransulam-methyl (FirstRate, FirstRate plus Express SG), thifensulfuran (Pinnacle SG) and fomesafen (Reflex). Willenborg emphasizes that the trials included chemistries currently registered for use in Western Canada as well as some products that are so far only registered in Eastern Canada for soybeans, such as FirstRate. Reflex is only registered for use in Manitoba’s Red River Valley. Chloransulam-methyl (FirstRate) is not registered in Western Canada.

“Generally, the control across all of the treatments was fairly effective, with volunteer canola control generally ranging from suppression to control,” Willenborg says. “Most of the volunteer canola control from these products was in excess of 90 per cent. From the study, the three most efficacious and economical combination treatments included: Express and Basagran Forte, Express and Viper ADV, or Heat and Basagran Forte. These three chemistries in combination performed the best in Saskatchewan conditions, providing really good control of volunteer canola and low crop injury with very similar yields. As well, these chemistries are from several different herbicide groups, including Group 2, Group 6 and Group 14, which also helps with delaying the potential evolution of herbicide resistance.”

Willenborg notes that overall, the highest net return was typically observed in the Pinnacle SG plus FirstRate treatment, however this combination is only registered in Eastern Canada. Although the Reflex treatment was effective, the phytotoxicity ratings were above acceptable thresholds seven to 10 days after herbicide application, leading to potential injury to soybean seedlings. “We also did not see the results we were looking for with 2,4-D pre-emergent treatments,” he adds. “We observed some injury with 2,4-D treatments using the seven day interval between application and planting, which indicates a longer interval will be required in Western Canada, or this treatment will not work well in our conditions.” Overall, the Pinnacle SG treatment had the greatest amount of volunteer canola shoot biomass present following application.

In conjunction with these herbicide options for controlling glyphosate-resistant canola volunteers, Willenborg also conducted a cultural control study comparing different seeding dates and seeding rates. “We were interested in determining the impact of seeding rate and seeding date of soybean on volunteer canola. Both of these are factors that growers have quite a bit of control over and that can have an impact on volunteer canola management. The results of the seeding date study across seven site years were very inconsistent, showing that effects were highly dependent on the specific environmental conditions, soil temperature and precipitation at each local location. We did however develop recommendations from the study that indicated the optimal planting date range for soybean in Western Canada is May 22 to June 1 to optimize yields.”

Willenborg emphasizes that higher seeding rates increase crop competition and decrease the contribution of volunteer canola seed to the seedbank, which pays future dividends down the road. However, if the market price isn’t high enough, then it doesn’t pay to use higher seeding rates.

“From our research, we have been able to provide some good options to growers for managing glyphosate-resistant volunteer canola in their glyphosate-resistant soybean crops,” Willenborg says. “Between the two studies, we have identified two or three optimal herbicide combinations and optimal seeding dates and rates. Using the combination of recommended herbicide treatments with the optimal seeding date and seeding rates, growers will have better options for managing volunteer canola in their soybean crops.”