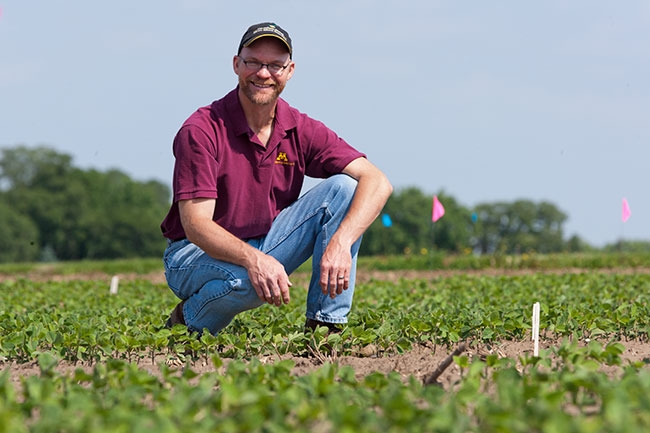 According to Naeve, a shift in industry thinking has occurred in the past 10 years. The old paradigm was about producing the highest yields. The new paradigm is managing for efficiency.

Back in 2006, the world record soybean yield of 139 bushels per acre (bu/ac) was set by grower Kip Cullers in Purdy, Miss. Soon after, soybean prices were soaring.

“He (Cullers) became an evangelist around high-input systems and driving high yields through inputs, or what I’d call ‘buying your way’ into higher yields. Then we started to see prices run up, and that’s when people got really excited about this bandwagon,” Naeve says.

Product promoters soon jumped on board, saying they had a product that would give two more bushels in the yield. “‘It’ll only cost $14 an acre and you’re stupid not to buy in,’ was the typical sales message,” he says.

“It’s the same game we’ve had in agronomy forever, but it just got much, much more intense during that upswing through 2014. I think it’s just a confluence of cultural events and the fact that farmers hadn’t been doing a lot with soybeans. A lot of U.S. farmers had a lot of experience with really highly managed corn, and treated soybeans as a secondary crop.”

Responding to that pressure, Naeve and other researchers in several states began investigating the new claims.

These days, Naeve says, the average yield in an Iowa soybean crop is about five bushels ahead of Minnesota. Both northern Minnesota and southern Manitoba yields have been close to 40 bu/ac. Individual fields in Minnesota get into the high 40 bu/ac fairly often, and 60-plus bu/ac yields do occur as exceptions.

It may be tempting to push for 60 or more bu/ac, but the research doesn’t support the effort, he says. For several years, colleagues at universities in Kentucky, Indiana, Illinois, Arkansas, Kansas, Michigan and Wisconsin joined with Minnesota to investigate products that might improve yields.

“Invariably, we’d find a lower return on investment (ROI) or a lower yield than claimed by whatever company was producing the product. The companies [suggested] the idea that multiple products would provide synergistic results. So, in this national study, we threw everything at the wall together. We had a bunch of individual treatments, and then we put everything together to see if there really was any synergy.”

In the northern states, there were “significant yield increases” in 15 of the 21 site-years. Trials were conducted from 2012 to 2014.

The applications were all compared to yields from an untreated control and were analyzed for ROI.

At the northern sites, the average plot yield was 61.2 bu/ac. Ten of the 15 site-years had treatments that gave a statistically significant yield increase, ranging from a yield of 63.6 to a maximum of 68.5 bu/ac.

The additional cost per acre for these treatments ranged from $8.75 for a fungicide seed treatment to $171 per acre for a combination of all yield-promoting products.

The additional cost was weighed against three yield returns and soybean prices. At a price of US$8.90 per bushel, only one of all the treatments showed a potential break-even with a 45-bushel yield, a foliar insecticide treatment. According to Naeve, if the yield went up to 60 bu/ac, the foliar fungicide plus insecticide application also would probably break-even.

The next “best” for economic efficiency was the seed treatment with fungicide, insecticide and Bio-Forge, at a 50 per cent probability of a return on investment with a 60-bushel yield. Following that was the single fungicide seed treatment for a probable positive ROI.

“The biggest thing farmers have to recognize is that these products that are sold as yield enhancers, in my view, are very rarely able to produce the yields expected. The farmer’s primary job is to protect the yield potential that’s in that seed.” Naeve says.

But, the soybean scientist also admits, there are or may be exceptions. For instance, he says, “We may not know all of the actual pests. Fungicides do have activity in soybeans, and do increase yields in some environments. Even though a pathologist may not see a disease, it’s my belief that the fungicide is affecting something. It may be protecting the plant from disease at a low level, and thus affecting yield – but it’s not some magical yield enhancement.”

Naeve provides two examples: The research showed a little more yield response when premium seed treatment included an insecticide. It was a very marginal response but it fit with other research. It only had a positive ROI however, at yields of 75 bushels per acre, with soybeans at $8.95 per bushel.

Second, among foliar treatments, research would sometimes show a benefit to pairing an insecticide.

“That was only because we had aphids in those fields occasionally. The populations were below the integrated pest management thresholds, but there was an ROI benefit because the insecticides are really cheap. Foliar insecticides tend to work well because they’re super, super cheap and highly effective on insect pests,” he says.

Two other exceptions in Manitoba and northern Minnesota may be manageable. One is a seed treatment.

“It seems like fungicide seed treatments have good activity for a couple weeks, and there is a kind of sweet spot for benefits. If it’s cool when you plant and get a little shot of rain, and the soybeans emerge after 10 to 14 days, then we can pick out a little yield benefit,” Naeve says. “In really good conditions, we don’t see any benefit. If emergence is really delayed, we don’t see a benefit. There is something in the middle, but it’s really hard to predict. Your best option is to order treatment for only part of the seed, then utilize it as you need it, depending on conditions and the forecast.”

The other exception is at the start of podding. “You have a better chance of getting a positive ROI from foliar fungicides where you get good canopy closure, tall beans, and really good growing conditions at the beginning of podding. Then, if you think you have very good yield potential, that’s the time to protect that yield with a fungicide. Don’t blindly buy fungicide in the fall with a plan to apply it to every field.”

“Input-based production is illustrated by the farmer who goes to his local co-op in late fall or early winter and orders all of his product for the next year – the seed treatment, fungicide, insecticide, and maybe some other product – then puts those on a schedule for applications in the next season,” Naeve explains.

“Acre-based production is issue-oriented: I have a disease or issue in my field, therefore I need to control it. I see an issue while I’m out scouting, and I fight it with a certain product. Those choices tend to have a higher probability of return.”

“The big trend in agriculture is to move towards larger farms, with fewer people managing them. Farmers are managing more distant fields with less time and bigger machines. They tend to do a lot of rubber stamping and make one system work on everything. That approach is efficient for a number of acres, but it isn’t efficient in terms of the dollars invested in the products,” he says.

As well, it may be leading into new problems. “Insecticide seed treatments give us a little yield benefit, but they have an environmental cost. We’ve seen a lot of resistance build up in insects. In northwest Minnesota, we now have pyrethroid-resistant aphids. Repeated use of these insecticides will break down the effectiveness and cause huge problems,” he adds.

So, what’s the “novel” part of what he’s learned from the field research and applications in Minnesota? Naeve says, “The novel part is in being a good manager, going back to basics and scouting and working for those soybean yields instead of trying to just buy yourself higher yields. I call it proactive management.”