Drought-tolerant wheat may exist on some mountaintop in Nepal, but in the laboratories of wheat breeders, it is truly elusive. It’s on the priority list, but don’t look for significant changes coming any faster than climate change. 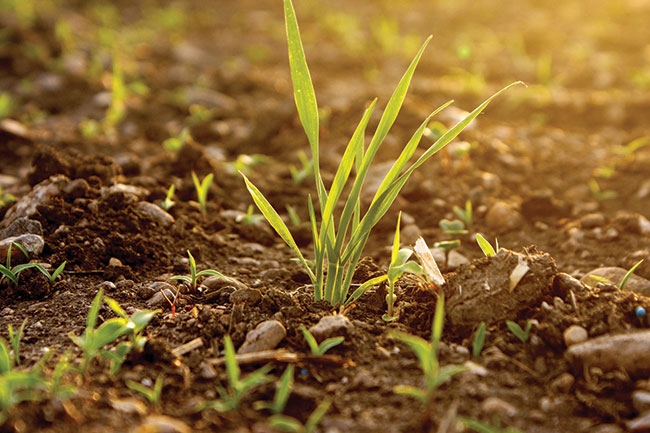 Researchers expected a plant with a stronger root to be better able to absorb water. Drought-tolerant wheat may exist on some mountaintop in Nepal

However, one lab in Canada has gone to the mountaintop – metaphorically. At the University of Guelph, the plant agriculture department has a project funded by the International Development Research Centre (IDRC), for the purpose of doing research on drought tolerance in wheat from Nepal. Kamal Khadka, a PhD candidate from Nepal, is deep into the multi-year research project.

According to Alireza Navabi, a wheat breeder at the University of Guelph and advisor to Khadka, the search is likely to be long and difficult. Similar projects are underway in other labs in Canada and in other countries.

“Many groups are focusing on drought tolerance in the world,” Navabi says. “It has become more and more important with climate change. Hopefully, new wheat varieties will have a better response to drought stress, but look for small incremental changes.”

Pressed for how much to expect – and how soon – he points to results with efforts to increase grain yield. “We think of a one per cent gain in yield over the last 50 or 60 years. Improvements in response to drought will be the same: slow. That’s how things work with plant breeding,” he says.

Resistance to drought isn’t a single trait, he explains. Many genetic factors can be behind the reason for one line of wheat performing a little better when conditions are dry.

With 320 lines of wheat now in the Nepal project, Khadka is collecting many lines of data, and near-drought conditions this past summer in southwestern Ontario were good news for the researcher.

“We had a wide variation among the genotypes for different traits, due to the droughty environment,” Navabi says. “It’s too early to comment, but [Khadka] is seeing a very wide diversity in traits potentially associated with drought tolerance.”

Timing is one aspect in the research. Timing can be regional, with dry conditions being frequent in the early growth stage in one part of the world, to being frequent when the crop is close to maturity in other parts of the world.

Internally, the stage of growth that is stressed by lack of moisture is very important. In early growth, dry conditions can limit the number of tillers or the potential number of grains that can be produced. In mid-season, at flowering, dry conditions can limit anthesis and lead to empty florets that could have become grain. Later stress can limit production of the photosynthates that go into the grain. If that happens, you have lighter seed that isn’t plump enough for a milling grade.

In growth chamber testing, Khadka is separating his seed samples by several other physical characteristics. Some are associated with roots.

“You can definitely expect that a plant with a stronger root has a better capacity to absorb water. It also can contribute to how efficient in water use a variety can be,” Navabi says.

Genetic characteristics, like the physical, also can separate “good performers” for dry conditions.

Khadka has been developing a “harvest index.” It deals with biomass, the total amount of above ground material produced by a plant during its growing season, and compares that to how much grain the plant is able to produce.

“The harvest index is a very important trait for drought tolerance,” Navabi says.

In terms of genetics, Khadka is also looking for performance differences in three critical yield components: tillers, potential number of grains and potential weight of the grains.

“The combination of these three yield components determines how much yield we have. Under drought stress, if you find a variety in the early growth stage that has the ability to maintain its tillering capacity, that can also produce more grains for each tiller, you expect it to be a more tolerant variety,” Navabi says.

Other traits with a role to consider include variations in the amount of wax in leaf tissue (affecting evapotranspiration) and the role of awns in a dry environment.

“Awns are not important in a normal environment, but they contribute to photosynthesis and are close to the seed. There’s a theory that awned varieties can be more drought tolerant because they have a very close source of photosynthates for the grain. That’s another parameter we can be looking at,” Navabi says.

Growth chambers let Khadka test material in both optimum and dry conditions. He’s also co-operating with an irrigation research centre in Nepal and is searching for DNA markers to associate with the traits he’s observing.

Researchers expected a plant with a stronger root to be better able to absorb water.

The big picture
Guelph’s drought research effort is one of many. Canada has six research areas, or pillars, for wheat research under a national 11-year umbrella program known as the Canadian Wheat Alliance (CWA). Members of the CWA include Agriculture and Agri-Food Canada, the University of Saskatchewan, the province of Saskatchewan and the National Research Council of Canada (NRC). This research is focused on accelerated breeding, disease resistance and reduced losses due to drought, heat and cold stress.

“We essentially have an alliance of breeders and molecular biologists in agriculture working together,” says Jitao Zou, a senior research officer with NRC in Saskatoon. “To a large extent, we focus on Canadian germplasm that has been traditionally utilized for breeding.”

In the Canadian pool of wheat genetics, researchers are trying to associate important crop traits with specific gene segments. The pool, he says, has 17 billion identifiable segments known as base pairs of DNA – about five times more than the human genome. When a trait is associated with a specific segment, it has a “marker” in the pool that breeders can use to help their selection program.

Basically, drought tolerance or resistance requires water uptake and usage efficiency. Measurables include how much water the roots can harvest from the soil and how well the above ground portion of the plant can resist the loss of that moisture through leaf pores.

“We look at how deep the root can grow, at the branching and the biomass, then we try to find markers for the breeders,” Zou says. “We screen the individual lines to understand which one has a better root system. The better root system is likely to be more resilient in dry soil.”

Above ground, wheat with a waxy surface is more likely to retain water under heat and drought. There’s a hunt for those markers in the gene pool, too.

Gradually, the program will build new lines of spring wheat with bigger roots and heavier wax. They will survive and thrive in a dry season better than present wheat varieties. A parallel program, Zou adds, is working with cold tolerance in winter wheat. The process is faster, with marker-selected assistance, but still slow.

“I think, in terms of the next five years, we are going to have some markers that will be valuable for the breeders to use,” Zou says.

Then, with a plant population that already is close to the registration process, a breeder can sort through the markers to look for drought tolerance, rather than investing five more years in checking roots and leaf wax.

Private research
Agricultural biotech researchers are starting to use a cut-and-paste gene editing technique for quick, non-GM trait selections. This technology, CRISPR-Cas9 editing, is based on research at the University of California, Berkeley.

One multinational corporation on that track is DuPont. In October 2015, DuPont announced it is growing a drought-resistant corn as well as an altered wheat variety that will breed like a hybrid. Both are products of the CRISPR technology.

Other technologies – like high-throughput phenotyping for traits, next-generation sequencing for markers and genetic engineering – are being brought in to open the bottleneck in wheat genetics for improved drought resistance.

At least one private laboratory is also searching for the elusive drought-tolerance trait. Frontier Agri-Science (FAS), an agricultural biotechnology company located in Toronto, specializes in non-GMO genetic technology. It was launched in 2010 by Julian Northey, who holds a PhD in plant molecular genetics from the University of Toronto.

FAS now has a team of seven scientists and a website listing partnerships with four Canadian universities as well as BASF, Biogemma and the International Crops Research Institute for the Semi-arid Tropics (ICRISAT).

The company has three research platforms, including one that specializes in water-use efficiency and stress tolerance.

According to Northey, his lab harvested six lines of durum wheat as foundation seed in September. It hopes to enter those in registration trials in 2017.

“We’ve been working on [this] for four years, and we feel it has great promise in drought resistance. The science itself has been 10 years in development,” Northey says.

He added, for Ontario wheat producers, “We will be starting to select this [trait] in bread wheat as well, very shortly.”

Chemical technology underlying this drought-screening platform is a trade secret, but his research using Arabidopsis genetics and the genetic pathway was published in the journal Nature Plants in July 2016.

“We have flipped, on its head, decades of common thinking about what leads to drought resistance with this particular plant hormone,” he says. “We hope to have significant yield increases under water-limited conditions in (non-GM) wheat.”

When the new lines go into registration trials, the industry will be watching.