Survey numbers were lower in 2018, but that’s happened before. 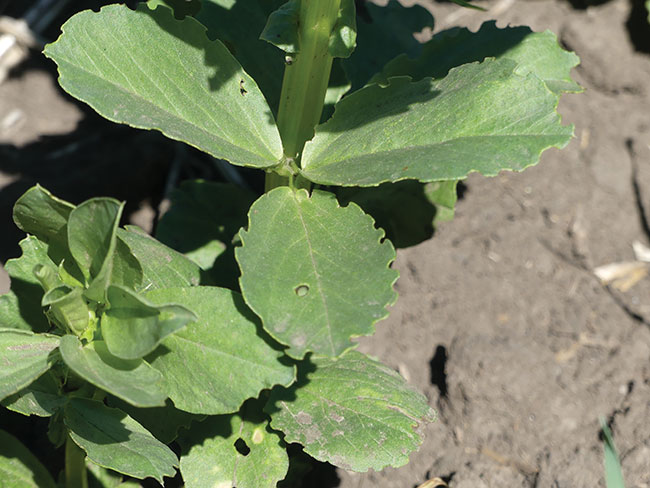 First confirmed in southern Alberta in 1997, the pea leaf weevil (Sitona lineatus) has gradually extended its range into northern Alberta and most of Saskatchewan. The insect has not been found in Manitoba. A serious pest of field pea and fababean, entomologists continue to monitor for the insect and search for control methods that work across the Prairies.

“There first thing that jumps out is a much lower level of damage by pea leaf weevil,” says provincial entomologist Scott Meers in Brooks, Alta., in describing the 2018 Alberta pea leaf survey map.

The annual pea leaf weevil survey is carried out in late May and early June in Alberta and Saskatchewan. Damage rating is assessed by counting the average number of notches per plant. The surveys are not a forecast, but rather an indication of the level of pea leaf weevil populations during the spring.

In Saskatchewan, provincial entomologist James Tansey notes that pea leaf weevil populations were also much lower in 2018, although the insect continued to spread east and north.

“There has been some discussion on why feeding levels were lower in 2018,” says Tansey. “It could be the drier weather or that they aren’t as cold tolerant as some other insects and more died off over the winter.”

Maya Evenden at the University of Alberta, and Meghan Vankosky, research scientist with Agriculture and Agri-Food Canada in Saskatoon, also started pheromone-based survey and monitoring in 2017. The pheromone monitoring attracts both male and female adults, and is useful for monitoring adults for spring and fall activity.

The adults emerge from pupae in the soil in late April and early May and feed on legume plants. They then move to pea and faba bean fields where they reproduce. Females lay 1,000 to 1,500 eggs in the soil near seedlings. After hatching, the larvae feed underground on the Rhizobium nodules on pea and faba bean roots for about six weeks. For lentil growers, there is good news. “Pea leaf weevil hate lentils,” Vankosky says.

Larvae cause most of the yield loss by feeding on nodules, resulting in poor nitrogen fixation, poor plant growth and increased drought stress. Research has found that 98 per nodule loss equates to a 27 per cent yield loss.

Vankosky says that adult foliar damage may kill small seedlings and can reduce pod production. In greenhouse trials, cumulative foliar damage resulted in 28 per cent pea yield loss, but she says yield loss in the field is much more variable.

Crop rotations can help minimize infestations, although the adults are strong fliers. Vankosky says that planting a pea or fababean crop beside any legume stubble increases the risk.

No-till seeding systems also help to reduce the impact of pea leaf weevil. Vankosky says that colonization and adult emergence is lower on no-till because it takes longer for the weevils to find pea or faba bean seedlings. This information is based on work conducted in the Pacific Northwest of the United States.

Inoculation is also important. Vankosky’s research found that regardless of whether pea leaf weevil was present or absent from a pea field, yield was always significantly higher with inoculated seed.

Foliar application to control adult feeding on leaves was not effective in controlling yield losses in Alberta. If pea leaf weevil adults are sprayed early, later flushes of females will still lay eggs. Later spraying will mean that some females will have already laid their eggs in the soil, which means the larvae will hatch to feed on the nodules, and also to perpetuate the life cycle.

“Foliar spraying is just revenge spraying. It may limit foliar feeding, but you’re not going to limit yield loss from the larvae feeding on nodules,” Meers says.

“There hasn’t been a lot of research in Saskatchewan, but of the work that has been done, fortunately the results are fairly consistent with Alberta research,” Vankosky says. 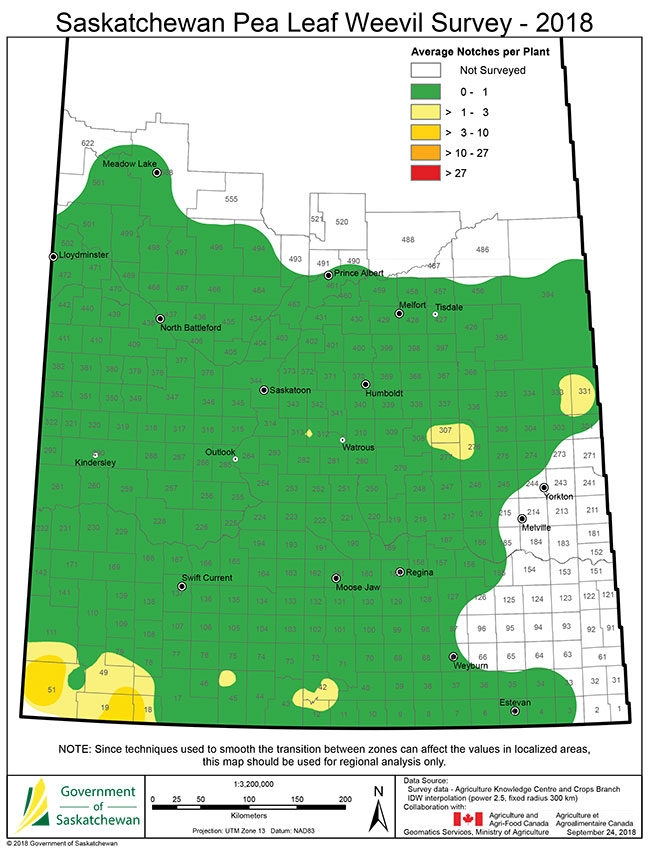 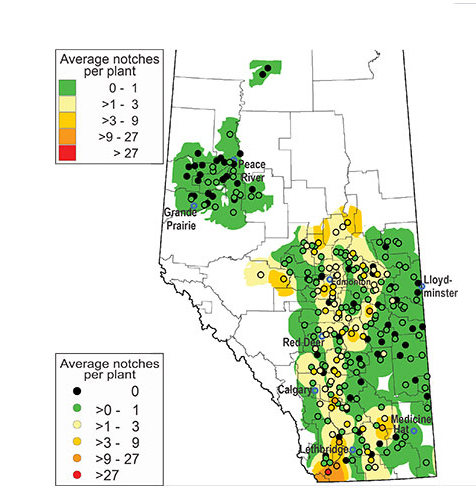 Vankosky says that on-going research is being conducted on many aspects of pea leaf weevil biology, distribution, and insecticidal and biological control. In the meantime, the best control option in areas with pea leaf weevil is to inoculate pea and faba bean seed with a Rhizobium inoculant, use a registered insecticidal seed treatment, plant away from fields with a history of legumes, and scout fields as pea and faba bean seedlings emerge until the six-node growth stage to monitor pea leaf weevil populations.

“Be careful backing off on pea leaf weevil seed treatment based on a one year dip in populations. We have seen low years before and they can rebound quickly,” Meers says.