Breaking down the characteristics of different soil zones. 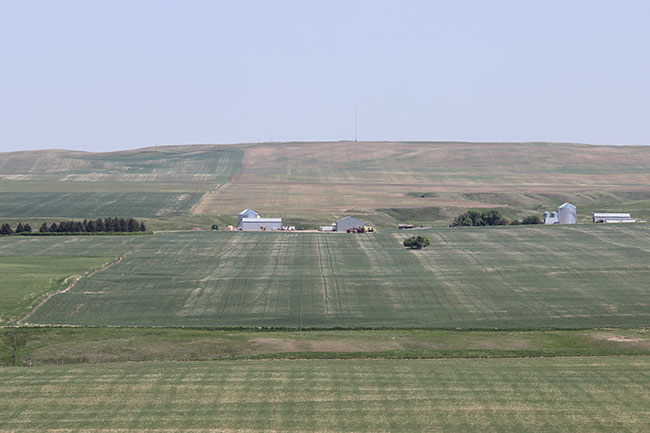 The wheat-fallow system commonly used between 1920 and 1970 resulted in a significant decline in soil organic matter and contributed to extensive wind and water erosion of soil.

Most of the cultivated soils of Western Canada formed and developed under grassland vegetation. There are four major soil zones: Brown, Dark Brown, Black and Dark Gray. Each zone is characterized by uniquely different environmental conditions which influenced soil development. For example, soils in the Gray zone developed under boreal forest vegetation and are in the Luvisolic soil order. The Canadian System of Soil Classification classifies soils developed under grassland vegetation in the Chernozemic soil order. The word Chernozem comes from a Russian term meaning “black soil.”

Western Canadian soils have formed and developed over the past 10,000 years as a result of the interaction of six major factors: climate, vegetation, parent material, topography, drainage and time. The relative influence of each factor varies, and the interaction of these factors determined the type of soil that developed at the local level.

Climate, specifically temperature and precipitation level, has strongly influenced the types of native vegetation that survived and flourished over the past 10,000 years. For example, the climate of Brown soil zone is typically relatively warm, with higher evapotranspiration and lower precipitation resulting in short, drought tolerant prairie grasses being the dominant native vegetation. The Black soil zone is relatively cooler with lower evapotranspiration and higher precipitation, resulting in lusher fescue native grass vegetation.

Parent material refers to the various types of geological deposits which determined the minerals on which soil formed, and determined characteristics such as soil texture, soil nutrient levels and water holding capacity. For example, lacustrine parent material was deposited in glacial lakebeds. The deposited material tended to be fine textured clay and topography tended to be relatively flat to undulating and mostly stone free. This is in contrast to glacial till material with variable soil texture, gently rolling to hummocky topography and often with moderate level of stones.

The processes of soil development in Western Canada have taken place slowly over time during the past 10,000 years. In the past 150 years, human influence has become a seventh additional factor that continues to influence subtle to significant changes to soil. For example, the wheat-fallow system commonly used between 1920 and 1970 resulted in a significant decline in soil organic matter and contributed to extensive wind and water erosion of soil. However, in the past 30 years, the shift to continuous cropping, direct seeding and diverse crop rotations have had a profound improvement on soil quality. 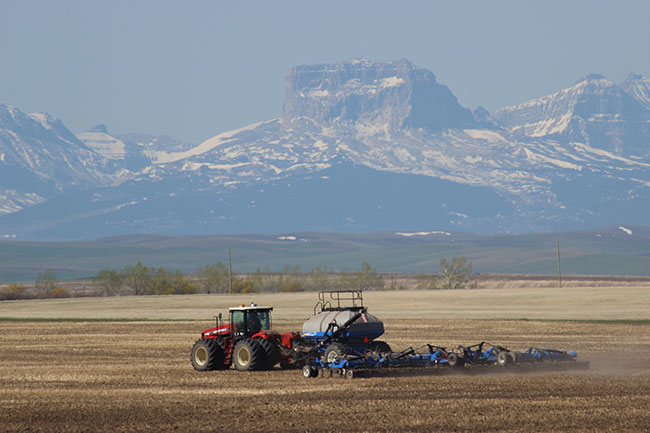 In the past 30 years, the shift to continuous cropping, direct seeding and diverse crop rotations have had a profound improvement on soil quality. Photos courtesy of Ross H. McKenzie. 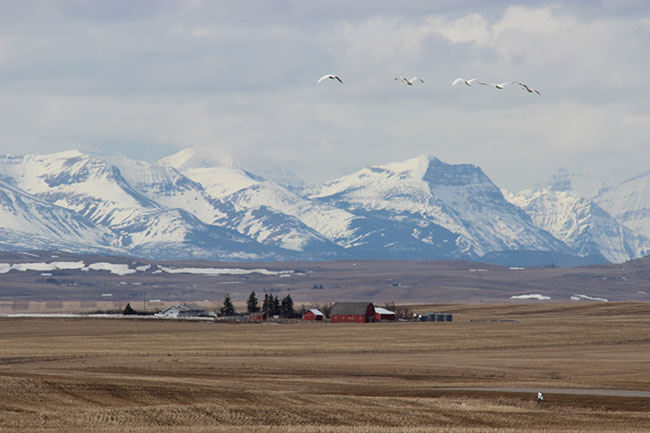 The Brown soil zone is located is southeastern Alberta and southwestern Saskatchewan. The Brown soil zone is the most arid of all the zones and is characterized by average annual precipitation in the range of 275 to 325 millimetres (mm). The growing season typically has high evapotranspiration, frequent droughts and hot dry winds. As a result, the dominant native vegetation was short and mixed prairie grasses. Limited growth of native grasses over 10,000 years after the glaciers receded meant less soil profile development and relatively small amounts of organic matter were added to soil. Top soil is brown in colour, indicating a lower level of soil organic matter in the range of two to 3.5 per cent. Brown soils have relatively low soil fertility.

Moisture is the primary limiting factor to crop production in this region. Only the more favourable soil types within this zone are considered to be arable. From the 1920s to 1970s much of the annual cropland was in a wheat-fallow rotation. Some of the worst wind erosion events on the Prairies occurred in the Brown soil zone. The majority of the land is now direct-seeded and cultivation is kept to a minimum to conserve soil moisture and leave protective crop residue on the soil surface. Direct seeding practices have evolved to provide for good soil moisture and soil conservation which has greatly reduced the use of summer fallow.

The longer growing season and higher growing degree-days make this region the most ideal for irrigated production on the Prairies, particularly for special crops. Hard red spring wheat and canola are the most commonly grown dryland crops. Some producers have replaced summer fallow in the cropping system with lower water-use crops such as peas. Pea or lentil are commonly included in dryland crop rotations in recent years in this zone. Other drought-tolerant crops such as mustard are also grown in rotation with wheat. The poorer soil areas in this zone that are saline, sodic, or sandy, or that have other physical or chemical limitations, have been left as native rangeland or have been returned to permanent pasture. The highest agricultural use of these sensitive lands is for livestock grazing. Careful rangeland management practices are essential to ensure that these vulnerable soils are conserved and to maintain ecological integrity of the native plant community. 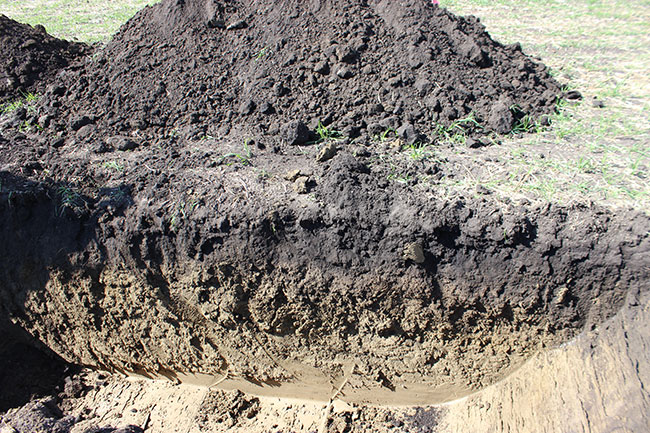 Each of Canada’s soil zones is characterized by uniquely different environmental conditions, which have influenced soil development over the years.

The Dark Brown soil zone is characterized by annual precipitation in the range of 325 to 375 mm, more than the Brown soil zone. The growing season typically has moderately high evapotranspiration, warm winds but less frequent droughts than the Brown Soil Zone. The dominant native vegetation was mixed prairie grasses. Soils are dark brown in colour, indicating a moderate level of soil organic matter in the range of 3.5 to five per cent, with moderate soil fertility. Moisture is the principal limiting factor to crop production. The more favourable soil types are arable. Similar to the Brown soil zone, the wheat-fallow rotation was commonly used up to the 1970s, however, with the adoption of direct seeding for moisture and soil conservation, most areas are now direct seeded and continuously cropped.

Many areas of this zone are also well suited to irrigated crop production. Irrigated cropping systems include fewer special crops than in the Brown soil zone and a higher portion of annual and perennial forage crops.

The majority of annually cropped land is direct-seeded and cultivation is kept to a minimum to conserve soil moisture and maintain protective crop residue on the soil surface. Most producers have shifted away from the wheat-fallow rotation in favour of more diverse cropping systems that include cereal, oilseed and pulse crops in their crop rotation.

The Black soil zone is characterized by annual precipitation in the range of 400 to 475 mm, lower evapotranspiration and less frequent warm, dry winds than in the Dark Brown soil zone. The dominant native vegetation was fescue grasses, with the invasion of aspen. This region is sometimes referred to as parkland. The soil colour is black, indicating good levels of soil organic matter in the range of 5 to 10 per cent. These are the most fertile soils in the Prairie Provinces. The vast majority of land is arable and well-suited for annual crop production. Moisture is usually not a limiting factor to crop production. Wheat, barley, canola, and forages for hay and pasture are the most commonly grown crops, with lesser amounts of pulse crops. Direct seeding or reduced tillage has been adopted by the majority of farmers, but cultivation is sometimes used to manage crop residue.

The Dark Gray soil zone is characterized by quite variable annual precipitation ranging from 300 to 500 mm. The dominant native vegetation was a mixture of fescue grasses with both coniferous and deciduous trees. The colour of the Dark Gray soils varies depending on the level of leaching and the amount of soil organic matter accumulation in the soil. Leaching is caused by the organic acids that come from the forest leaf litter on the soil surface. The greater the leaching, the grayer the soil colour. The level of soil organic matter generally ranges from three to 4.5 per cent, similar to the Dark Brown soil zone. The majority of Dark Gray soils are arable and suitable for annual crop production. Moisture can sometimes be a limiting factor to crop production in some areas of this region. The majority of farmers have adopted direct seeding or reduced tillage, which has led to improved soil quality.