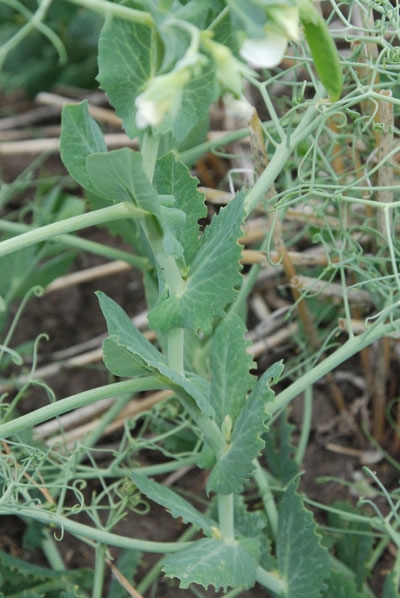 Pea leaf weevil is now firmly entrenched in southern Alberta and southwestern Saskatchewan. With the ongoing risk of economic losses for pea growers, Agriculture and Agri-Food Canada research scientist Hector Carcamo embarked on a three-year research project with many collaborators to better understand the insect’s behaviour and how it might be managed.

With funding from the Alberta Crop Industry Development Fund, Alberta and Saskatchewan Pulse Growers, Agriculture and Agri-Food Canada, Alberta Agriculture and Rural Development, Syngenta Canada and Bayer CropScience, Carcamo was able to develop a comprehensive management plan for the insect pest. He had a long list of collaborators from the public research sector, as well as help from producer groups, industry and farmers.

Understanding the life cycle key to control
The pea leaf weevil adult beetle overwinters along field edges in grasses, alfalfa and tree shelterbelts. The adult is about five millimetres long with light brown stripes on its back. In early May, the adult moves on to legume crops such as pea, fababean, alfalfa, beans, clover, lentils, lupins and vetch. Pea and fababean are reproductive host plants.

The adults feeding on the leaves of legumes generally do not cause economic loss. Telltale symptoms of adult feeding include notching of leaf margins. Feeding damage can begin at crop emergence in May during hot springs or in June during normal springs. The weevils are long-lived and keep feeding on new pea foliage throughout the summer.

During May, June and July, the female adults lay eggs in pea and fababean fields. Once the eggs hatch, the small grub-like larvae move to the roots of the pea and fababean plant and feed on Rhizobium root nodules. These nitrogen-fixing nodules are destroyed, and this damage has caused significant economic losses in pea and fababean: up to 28 percent yield loss in one research study on fababean.

The weevil completes its life cycle in the fall, when the larvae pupates and the adult weevil emerges in August and September. The young adults feed on pea plants, or any other plant in the bean family, prior to migrating to their overwintering sites.

Greenhouse studies looked at Cruiser Maxx seed treatment activity Cruiser Maxx, from Syngenta Canada, is registered as a seed treatment for control of pea leaf weevil. Carcamo, though, wanted to better understand the mechanism of activity in order to better help plan integrated pest management strategies. He initiated a greenhouse study that looked at the effect of Cruiser Maxx (insecticidal active ingredient thiamethoxam) on the adults and larvae. As a systemic insecticide, thiamethoxam moves throughout the growing seedling. Adults feeding on the pea leaf ingest the active ingredient. He found that thiamethoxam was not killing all of the adult weevils feeding on the plants.

“Mortality of adults was not the primary mechanism of plant protection for thiamethoxam. It had to be something else,” explains Carcamo.

Carcamo looked at the effect of thiamethoxam on egg-laying behaviour, and found a significant difference when the pea seed had been treated with thiamethoxam. Egg laying was delayed for about one week, and the number of eggs laid also were reduced significantly, by almost 66 percent.

The researchers also looked at the effect of time of egg laying and the interaction with thiamethoxam. Eggs were added to the soil at either the second or fifth node stage of pea plants that were either treated with thiamethoxam or left untreated. When eggs were added at the second node stage, there were significantly fewer larvae in pots with treated plants than in those untreated. However, if eggs were added at the fifth node stage, there were no differences between treated and untreated plants. The researchers also noted a trend of fewer larvae in untreated pots that had eggs added at the fifth node compared to the second node stage. “Crop stage is an important factor in the ability of the plants to compensate for larval damage. The impact of the larvae is not as important if they attack the plant later,” says Carcamo. “If you see damage on the pea plants later in the season after the fifth node stage, you don’t have to worry as much about economic losses.”

Carcamo summarizes that the five greenhouse studies showed that a small proportion of the adults (10 to 30 percent) are knocked down (sometimes killed), with the remaining weevils laying fewer eggs later in the season. Of the larvae that hatch and find nodules, only 50 percent are expected to survive in the thiamethoxam-treated plants. The ultimate impact of the insecticide on yield protection will depend on the populations of weevils and more importantly, on growing conditions that affect yield, such as moisture, soil fertility and other biological parameters.

Field trials help guide management
Another trial looked at the interaction of nitrogen fertility and thiamethoxam seed treatment. The results showed high nitrogen fertility reduced the impact of weevil on pea yield from 17 percent on an unfertilized field to three percent on a field that had 60 lbs of N per acre applied prior to seeding. “Our results suggest that fields with high levels of N may not require weevil control because the effect of weevil on crop yield is very low (around three percent). In most situations, though, peas are planted on low soil N, and the weevil can reduce yields by 10 percent or more, requiring a control action. These relationships will vary depending on input and pea prices,” says Carcamo.Economic thresholds were also validated in the research. The researchers found that when 30 percent of seedling pea plants had feeding damage on the clam leaf, economic losses would occur. At this feeding level, insecticidal spraying could be economical, depending on environmental conditions. However, as shown in the timing of larvae feeding, if this feeding damage does not occur until after the fifth node pea stage, control will not likely be required.

Seeding date and post-emergent spray with Matador insecticide were also investigated. An early seeding date of April 26 was compared to a May 16 seeding date. Although plots seeded in April sustained higher cumulative foliage damage than those seeded in May, the later-seeded plots showed terminal leaf damage was 100 percent compared to only 10 percent in the April plots. “This suggests that although overall damage to larger plants is higher for April-seeded plants, young seedlings may be at higher risk of defoliation when planted in May,” says Carcamo. “We also know that early seed pea yields better in the absence of the weevil, so delaying seeding doesn’t appear to be a good management strategy.”

Foliar spraying with Matador produced inconsistent results. Carcamo says the reason may be due to the re-invasion of weevils after the fields were sprayed, which is similar to grasshoppers moving back into a field after spraying. Although adult weevil levels were often seen to be lower with in-crop spraying, larvae damage was not always noticeably
reduced.

Research also looked into the natural enemies of pea leaf weevil. While no parasitoids were found for adult or larvae, ground beetles were found to be a potential predator of pea leaf weevil eggs. “These predators are a valuable control mechanism, so they should be a consideration when thinking about a post-emergent foliar spray,” says Carcamo.