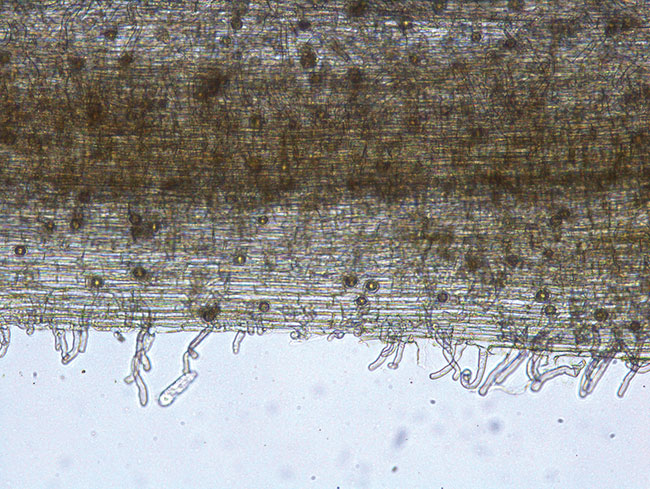 Recent field surveys across the Prairies are improving the understanding around the widespread concern of root rot in pea and lentils. This disease complex includes serious pathogens like Aphanomyces, first confirmed in 2012 in Saskatchewan and in Alberta in 2013, and Fusarium that often occur together, increasing the risk of disease and yield loss. Researchers are building on this information through new projects and the development of decision-support tools to address disease risks.

“Over the past four years we conducted province-wide surveys of pea and lentil fields across Alberta, Saskatchewan and Manitoba to determine the distribution of Aphanomyces euteiches, and to determine what the primary root rot complex organisms are and their distribution and severity,” explains Syama Chatterton, plant pathologist with Agriculture and Agri-Food Canada (AAFC) in Lethbridge, Alta. “We discovered that Aphanomyces is now virtually anywhere that peas and lentils have been grown in the Prairie Provinces, including north into the Peace Region of Alberta. On average, 40 to 50 per cent of pea and lentil fields tested positive for Aphanomyces, causing moderate to severe injury in many of these crops.”

The survey results also confirmed that Aphanomyces is typically occurring as a complex with many different Fusarium species. Researchers found that there is an interaction between these two pathogens, with higher disease levels when both Aphanomyces and Fusarium are present together compared to only one or the other. Across the Prairies, between 80 and 90 percent of pea and lentil fields tested positive for Fusarium, including F. avenaceum and F. solani, the two most virulent Fusarium species in pea and lentil. It is important to note that these are not the same pathogens that cause Fusarium Head Blight in wheat, which is caused by
F. graminearum.

A. euteiches is a highly aggressive soil borne (not seed borne) water mould or Oomycete affecting pea and lentils, producing long-lived resting spores (oospores). Although infection usually
occurs during seedling emergence, infection can happen at any time during the growing season when soil moisture is available. Fusarium spp. are widely distributed with a broad host range, surviving on stubble and bridging from crop to crop. The most susceptible stage to infection seems to be at the seedling stage, and disease is favoured by high soil temperatures and moderate soil moisture. Classical Aphanomyces root rot symptoms include honey-brown discolouration of lateral roots, epicotyl pinching and cortical decay, while classical Fusarium root rot symptoms are a blackened tap root healthy lateral roots and reddening of the vascular bundle. However, in a root rot complex of both pathogens, it can be difficult to distinguish between them and above-ground symptom expression can vary greatly. As well, above-ground symptoms are not always a good indicator of root rot severity. 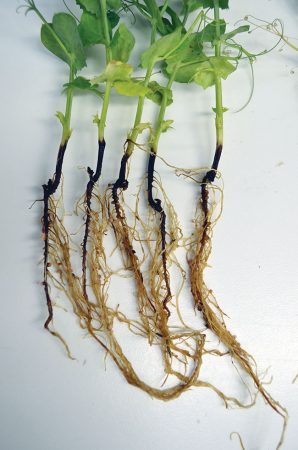 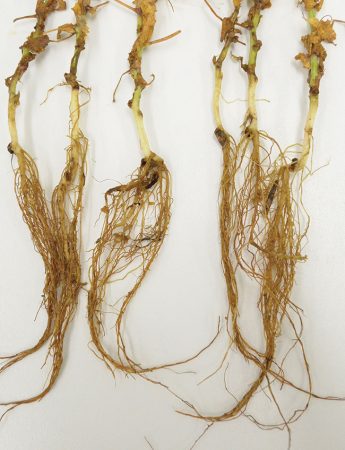 Early season yellowing caused by Aphanomyces in a field near Bow Island, Alta.

“Growers with a history of root rots should get their soil tested to confirm the presence of Aphanomyces, and if present then avoid planting peas and lentils in Aphanomyces-infested fields,” Chatterton says. “The recommended management strategy for Aphanomyces is for prolonged rotations of six to eight years between pea and lentils in infested fields. The best pulse crop option in infested fields are fababeans, soybean and chickpeas, which are considered to be non-Aphanomyces hosts. We also recommend that growers consider using a seed treatment that targets the root rot complex. Because there is an interplay between Aphanomyces and Fusarium, seed treatments for Fusarium are recommended as that can help knock back the increased inoculum load of multiple pathogens and improve crop development. As well there is one seed treatment chemistry registered for early season suppression of Aphanomyces, however Aphanomyces can come in later and beyond the window of seed treatment.”

Researchers are now taking this wealth of information gained from the field surveys on the causal organisms and their distribution and moving into more specific research in the next phase of the project. “We have completed some preliminary work on developing a soil testing system and decision support tools for managing Aphanomyces,” Chatterton adds. It is a difficult pathogen to isolate with conventional tools and requires specialized DNA testing. We have developed DNA detection methods that are good at detecting high inoculum loads, but we want to refine the methods to be able to detect lower pathogen loads. Current soil lab tests are only capable of confirming the presence or absence of Aphanomyces. It will also be important to develop a multiplex method that can look at different inoculum loads of different pathogens causing the root rot complex including Aphanomyces and Fusarium.”

Various agronomy trials are also underway, including a comparison of different seed treatments to determine if there may be any new chemistries that might offer promise. Other trials are exploring management strategies such as using cover crops with Brassica spp. in rotation and intercropping trials as potential disease management tools. Researchers are also conducting some pulse crop rotation trials across the Prairies to make sure other pulses such as fababean or soybean that are considered non-hosts of Aphanomyces are not increasing inoculum in the soil.

“There are also plant breeding efforts in progress to incorporate Aphanomyces resistance into pea and lentils,” Chatterton adds. “Plant breeders at the University of Saskatchewan are working on Aphanomyces resistance. However, the available resistance sources will only provide partial resistance to new cultivars. Because of the complex between the two pathogens causing root rot, in the long run resistance to both Aphanomyces and Fusarium will be important. Therefore, along with researchers at AAFC in Lacombe, Alta. we are looking at developing resistance to Fusarium pathogens, which at some point we will be able to pyramid with Aphanomyces resistance. Unfortunately, resistance development takes a long time through plant breeding work. Over the next three years, we expect to complete the development of a more refined decision-support tool and identify other management strategies to help growers better manage this widespread root rot complex in pea and lentil crops across the Prairies.”