Research found that the returns aren’t always there. 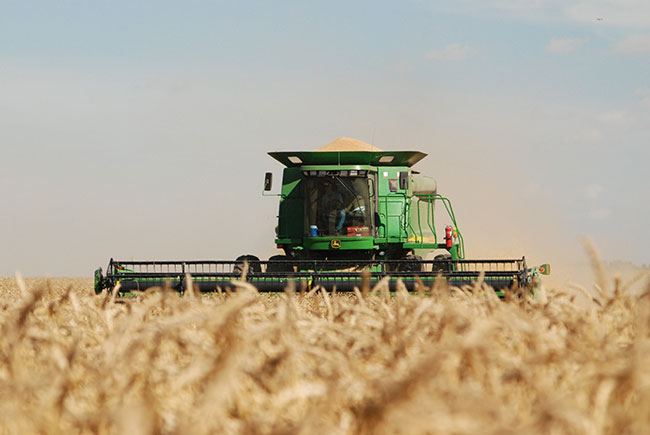 Pouring on the groceries to spring wheat is tempting in highly productive areas of the Prairies. Pushing yields up to 100 bushels per acre is pretty satisfying. But does it pay? Research across the Prairies looked at maximizing yield and what that did to net returns.

Research has shown that between the 1950s and the early 1990s, the rate of yield gain in CWRS wheat was about 0.35 per cent increase per year. From the early 1990s to 2013, that rate of gain had increased to 0.67 per cent per year. The increase was attributed to a combination of better genetics and more intensive management.

“What we determined is that we didn’t have to adjust our recommended target plant stand from the current 23 to 28 seeds/ft2. However, there may be other reasons why farmers want to increase plant stand including increased competition against weeds, and fewer tillers for ease of fungicide timing,” Kirk says.

Research by Amy Mangin and Don Flaten of the University of Manitoba looked at the optimum rate, source and timing of nitrogen (N) for high yielding spring wheat in Manitoba in 2016 and 2017. At seven site-years in Manitoba, the economic optimum range of soil test plus fertilizer N was 1.9 to 2.9 pounds of N per bushel, with an average of 2.3 lbs. N/bu to grow an average of 86 bu/acre wheat yield. The former recommendation was 2.5 to 3 lbs. N/bu. This shows better N use efficiency, but the higher yield potential also means the overall N requirements per acre are much larger with high yielding wheat varieties.

“For split application, the nitrogen should be available by the time of maximum crop uptake, which is at the stem elongation stage,” Kirk says.

In a Manitoba Agriculture study that ran from 2018 and 2020 at Arborg, Carberry, Melita and Roblin, four CWRS wheat varieties, AAC Brandon, AAC Cameron VB, AAC Viewfield and Cardale, were compared in a standard and advanced input environment.  The standard input included 100 lbs. N/ac with no PGR and no fungicide. Other treatments included an additional 50 lbs. N, a PGR applied at BBCH 31-32, fungicides at flag leaf and anthesis. And an Advanced treatment with all the additional groceries of additional N, PGR, and two fungicides was also compared.

Generally, at all sites, the PGR application reduced height by zero to three inches (zero to eight cm). Crop height without PGR ranged from 26 inches (65 cm) to 31 inches (80 cm). Some differences in yield were observed. In 2018, the additional 50 lbs. N/ac produced a significantly higher yield at two of four sites with an increase of six to eight bu/ac. In 2020, the highest yield at two of three sites was with the advanced treatment with about seven bu/ac higher yield.

“In both years, the conditions were fairly dry. There was little disease so we didn’t see any benefit to the fungicide applications, and there wasn’t any lodging, so the benefit of a PGR wasn’t realized,” Kirk says.

The additional 50 lbs. N/ac resulted in an increase in grain protein of between 0.2 per cent and 2.2 per cent.

“We would have seen greater results from the additional fungicides and PGRs if there would have been better growing conditions,” Kirk says.

Variety attributes for the Input Study 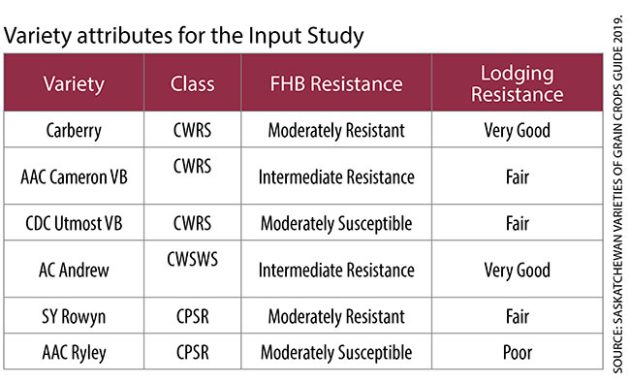 Three management levels were imposed on the different wheat varieties. Conventional, Enhanced and Intensive levels were compared at each site. 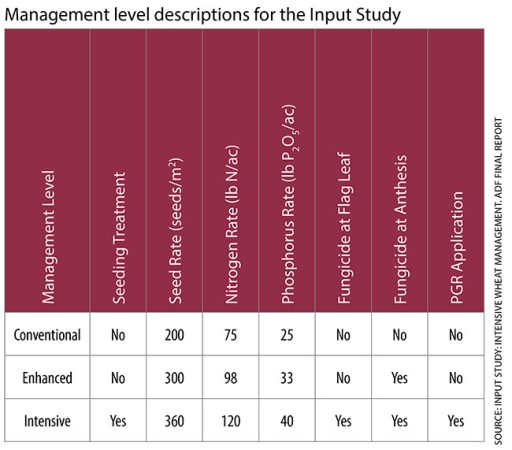 Enhanced management often led to hastened maturity across all varieties, but varietal selection for early maturity was also important to prevent delayed maturity with Conventional and Intensive management.

Test weight and seed size differences were largely attributed to genetic differences and any responses to management were of little practical agronomic importance, Slowski says.

An economic analysis, using commodity prices and input costs at the time, was also conducted comparing varieties, sites and management level. Averaged across the three-year study period, total returns above expenses were variable across treatments, ranging from losses of $66 per acre to profits of $91/ac.

Averaged across all site years and varieties, the Conventional management level had a three year average net return of $63.79/ac, compared to $31.03/ac for the Enhanced level and a loss of $12.80/ac with the Intensive level.

Overall, Conventional management consistently provided the best net returns per acre across varieties and market classes. However, these economic returns can change depending on commodity prices and input costs. Each individual farming operation has its own cost base, yield and commodity price. As a result, these returns will vary from farm to farm.

“The results of this experiment indicate that Conventional management of wheat in Saskatchewan continues to provide the best return on investment. Although under some circumstances, Enhanced management can be beneficial and profitable,” Slowski says.