Research shows the most economic rate of N for feed is often not higher than it is for malt. 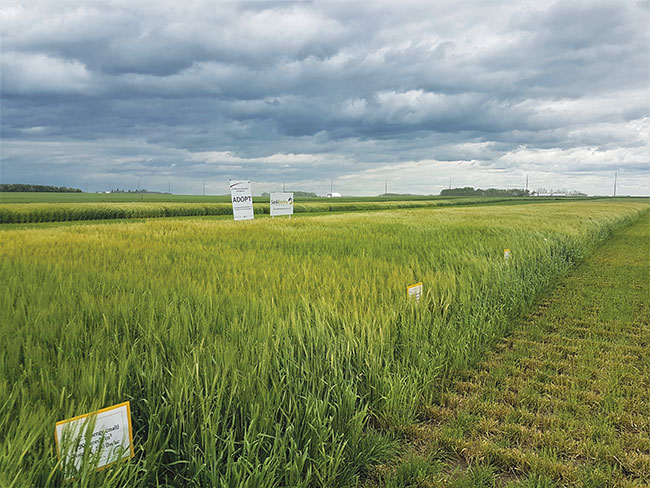 The general recommendation of applying more nitrogen (N) on feed varieties has not been supported by recent studies. Malt producers are usually more prudent with N because too much may result in excessive protein (above 12.5 per cent) and rejection by maltsters.

“Excessive grain protein in malt barley is not desirable as it results in cloudy beer, and no one wants that,” says research assistant Heather Sorestad with the East Central Research Foundation (ECRF) and Parkland College in Yorkton, Sask.

To compare the N management between feed and malt barley, Sorestad and ECRF/Parkland College research manager Mike Hall partnered with the seven other Agriculture Applied Research Management (AgriARM) foundations across Saskatchewan in Scott, Yorkton, Redvers, Indian Head, Melfort, Prince Albert, Outlook and Swift Current. The research was conducted from 2017 through 2019, with three locations in 2017, seven in 2018 and eight locations in 2019. It was financially supported by Saskatchewan Agriculture’s ADOPT program and SaskBarley Development Commission.

Sorestad says the Saskatchewan Crop Planning Guide reinforces recommendations to apply more N to feed barley. It assumes producers in the Black soil zone apply 99 pounds of nitrogen per acre (lbs. N/ac) to achieve a 93 bushel per acre (bu/ac) crop of feed barley. In contrast, the guide assumes only 81 lbs. N/ac are applied to achieve 76 bu/ac of malt barley.

High yield AND low protein
In each of the three years of the AgriARM research, the response to N fertilizer of high-yielding CDC Austenson feed barley was compared to a malt barley variety. In 2017, AC Metcalf malt barley was grown at three AgriARM locations, and N rates of 40, 80 and 120 lbs./ac were applied. In 2018, CDC Bow malt barley was grown at seven locations with 50, 75 and 100 lbs. N/ac. In 2019, CDC Austenson was compared to AAC Synergy with soil plus fertilizer N at 80, 120 and 160 lbs./ac.

The Saskatchewan Varieties of Grain Crops 2019 uses AC Metcalf as the check variety for comparative purposes with other malt and feed varieties. CDC Bow malt barley yields 111 per cent of AC Metcalf, while AAC Synergy yields 118 per cent. CDC Austenson feed barley is rated at 118 per cent of AC Metcalf in Areas 1 and 2, and 121 per cent in Areas 3 and 4, similar to AAC Synergy malt barley.In total, 18 location years were analyzed, but some trials were non-responsive to fertilizer N. Yield response curves were developed for each barley variety; malt barley protein content was also assessed. The most economical rate of N for feed and malt barley was calculated at the point where one dollar per acre of N applied will return one dollar of revenue. This calculation assumed N at 50 cents per pound and prices of $3.70 per bushel for feed and $4.68 per bushel for malt.

Overall, the yield response curves to N were similar between feed and malt barley varieties. The most economical rate of N varied by year and variety. Environment played a large role in protein content, with higher protein content in drier locations. For example, in 2018 in Scott, the yield of CDC Bow malt barley was 51 bu/ac at the lowest N rate of 50 lbs./ac, but the protein was already at 12.9 per cent – usually too high to be accepted by maltsters.

Hall cautions that malt barley growers should check with their maltsters to ensure that they are contracting AAC Synergy or other malt barley varieties. “I’m not going to be bold enough to say you should be applying more N to your malt barley. The proper rate is something you’ll have to determine based on your past experiences and anticipated environmental conditions,” Hall says. “However, I will suggest that if your malt barley protein is above 12 per cent, then feed barley in that same field would not have benefited economically from a rate of N higher than what you applied to the malt.”