Where are we in terms of integrated disease management (IDM)? What is IDM all about? Principally it’s about trying to make sure we use all the tools in the toolbox, integrating genetic resistance with chemical fungicides, cultural control and overall crop agronomy. When we sow the crop and how we look after it with nitrogen can profoundly affect how much disease pressure we’re under.

Getting it just right is never going to be easy. What’s happened in Australia? Before 2002, there wasn’t a huge amount of fungicide usage because it’s a much less responsive environment. Then we had an “exotic incursion.” Stripe rust came in from North America, probably on a grower’s boots. That changed the pendulum, from a dependence on genetic resistance to a reliance on fungicides, because, overnight, a huge proportion of all of the germplasm in Australia became susceptible to stripe rust.

Meanwhile in Europe, there was a totally different swing of the pendulum. It was inspired by a new set of varieties, in this case semi-dwarf varieties. With the new cultivars and more nitrogen, crops stayed greener for longer. Suddenly yields increased enormously in the ’70s. Higher yields and longer growing seasons in Europe drove growers to apply more and more fungicide. If you go to Europe now, it’s all about T1, T2 and T3 – Timing 1, Timing 2, Timing 3 with fungicides as a fixed part of crop agronomy. Up until 2005 in Europe, the pendulum had swung very much to the fungicide side of the IDM pendulum. 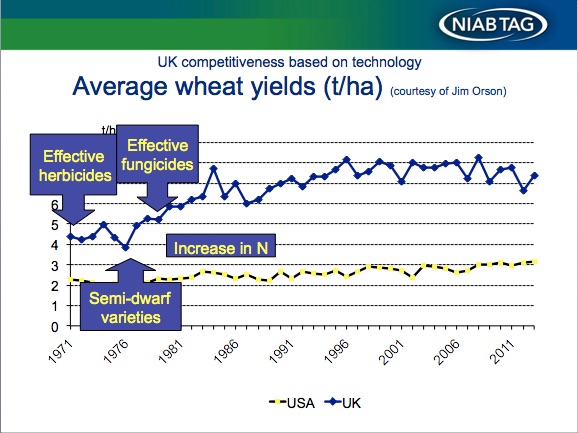 What’s gradually happened over time is that we’ve got better products with greater activity, but at the same time fewer products based on limited modes of action. There are fewer products that are more and more environmentally benign, but at the same time at greater risk of resistance development. In other words, we’ve moved from multi-site fungicides that killed the fungus in many different ways to single-site fungicides that do less damage in the environment but actually are much more vulnerable to resistance.

Fungicide insensitivity and resistance
Fungicide insensitivity and resistance has occurred principally in two ways. In Europe in the late 1990s and early 2000s, strobilurins, such as pyraclostrobin and azoxystrobin, came along with the biggest media hype since glyphosate. However, after only three to four years, the pathogen causing powdery mildew and then Septoria tritici (now Zymoseptoria tritici) in wheat developed resistance to stobilurins, and that’s been a real challenge ever since. In two to three years, the strobilurins went from being the best products to control foliar diseases in broad acre cereals to products that wouldn’t work against Septoria, a disease that is widespread in northwest Europe. I think that’s when attitudes really changed and people started asking the question, “Is there a different way to control disease?” 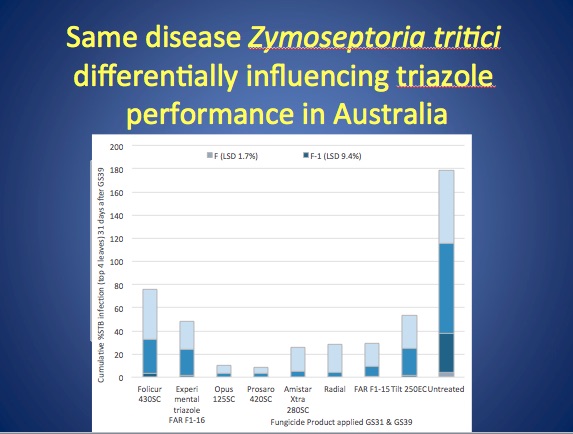 We’re in our infancy with fungicide resistance issues in Australia. We can see it in the field with powdery mildew in barley. Our triazole fungicides such as Tilt (propiconazole), Folicur (tebuconazole), Proline (prothioconazole), Prosaro (prothioconazole and tebuconazole co-formulated) don’t work as effectively to control powdery mildew. With Septoria, we’re not yet seeing reduced activity in the field, but the samples are showing insensitivity in the laboratory, so there is increasing threat that we will see resistance to fungicides in the field.

Europe and triazole use
What has happened in Europe with the triazoles over the last 20 years is that triazole fungicides have gradually become less effective against key diseases, firstly not working as effectively in the lab and then gradually being noted to be less effective in the field. That’s why with triazoles I think it’s important to talk about “fungicide insensitivity” and not “fungicide resistance.”

Therefore with the terminology we use, I think it’s important to recognize we really have three basic modes of action that we use in broad acre cereal disease control – triazoles, strobilurins, and the new SDHIs [succinate dehydrogenase inhibitors].

With the triazoles I think it is probably more appropriate to call it “insensitivity” rather than resistance, since if you say to a grower, “It’s resistant,” the tendency is to think that it won’t work when in reality it is still partially effective.

With regard to the SDHIs, they’re not actually that new since the family of chemistry has been around for 40 years. But a new branch of SDHI chemistry is now taking Europe by storm, as the strobilurins now have less application because of resistance in key pathogens. But after only three years of commercial use with these new SDHIs, resistance is developing quickly in the net blotch and Septoria pathogens.

It’s really important to recognize that fungicide resistance is changing the way in which growers and advisors elsewhere in the world manage their cereal crops. In Australia, growers and advisors are just beginning on that resistance journey. You’ve already had some exposure in Canada to the fact that the strobilurins are at high risk of resistance development in the pathogen.  It begs the question, “What can you do about it?”

Click here for part two: The importance of multiple modes of action and linking pathology with crop physiology.