Data collected during long-term research trials at Agriculture and Agri-Food Canada’s Elora and Ridgetown research facilities continues to provide researchers with invaluable information about the complexities of crop rotations and their impact on crops.

The long-term trials, conducted between 1982 and 2012, focused on increasing the efficiency of production and reducing the environmental impact of corn and soybean production in Ontario. They revealed that long-term corn-soybean rotations, the most widely used rotations in the province, are vulnerable to moisture extremes and are associated with reduced soil organic matter leading to poor soil quality and the lowest average yields.

A new four-year study at the University of Guelph, initiated in June 2014, is building on those results to look deeper into the effect weather has on crop system resilience over time. Using yield and weather data obtained from the long-term rotation and tillage trial in Elora, the researchers tested whether crop rotation diversity is associated with greater yield stability when abnormal weather conditions occur.

“The use of more diversified rotations has been advocated as a solution to sustainably increase the long-term resilience and productivity of Ontario field cropping systems,” says Bill Deen, the research lead and an associate professor with the department of plant agriculture at the university.

Using parametric and non-parametric approaches, Deen, along with Dave Hooker from the Ridgetown campus and Amelie Gaudin from the University of California, Davis, is examining how rotation complexity in tillage and no-tillage systems alters the amount of soil water available to plants, the ability of the corn and soybean to use the water resources and the effect imposed drought stress has on yields.

Preliminary results indicate that crop diversity increases corn and soybean yields over time, lowers the risk of crop failure and mitigates yield loss due to hot and dry conditions. They also show that yield benefits of crop diversity are less pronounced in wet and cool weather and that rotation diversity decreases soybean yield variability in abnormal years with hot-dry or cool-wet conditions.

“Our preliminary conclusions reveal that diverse crop rotations do indeed add diversity to a system and that by adding some diversity, such as wheat to a corn-soybean rotation, we can reduce drought effects induced by climate change, poor soil quality and high yield potential,” Deen says. He explains the research will help identify management practices instrumental to adapting Ontario’s most abundant cropping system to changes in climate. “It will also improve productivity and water use efficiencies under an increasingly challenging environment.”

The study is attempting to further understand how including winter wheat in a corn-soybean rotation, with or without red clover, impacts water availability in tilled and no-till systems. This understanding will lead to better predictions of the future value of rotation diversification.

The researchers also believe that the value of rotation diversity is currently underestimated and that its value could increase in the future. Under a changing climate where higher frequency of excess moisture or drought is predicted, water availability could be a larger constraint on the system in the future. Independent of climate change, as average corn yield increases, demand for water by the plant will increase and the role of rotation diversity in enhancing water supply could also increase.

Finally, residue removal from simple rotations could accentuate drought responses in simple rotations and increase the value of rotation diversity. Increasing understanding of rotation diversity should lead producers to reassess the use of simple corn-soybean rotations. This can increase average per acre corn and soybean yields, stabilize corn and soybean yields when weather extremes occur and increase soil carbon and quality.

In addition to improvements in average yields and stabilization of yield, previous studies using these long-term trials have demonstrated that rotation diversity increases soil carbon and quality and also results in increased nutrient and energy use efficiency of corn and soybean production. While not yet measured, it is probable that rotation diversity will also reduce offsite movement of nutrients from corn and soybean fields by improving water and soil retention in the system.

Many producers believe that a corn-soybean rotation is still more profitable than rotations that include wheat with or without red clover. Deen and Hooker’s research provides evidence that suggests the contrary is true.

“Adding wheat into a corn-soybean rotation increased corn yield two to six per cent and soybean yield nine to 14 per cent,” Deen says. “There is also a substantial reduction in a producer’s nitrogen requirements.”

Although the magnitude of rotation benefits varied with crops, weather patterns and tillage, yield stability significantly increased when corn and soybean were integrated into more diverse rotations. Introducing small grains into short corn-soybean rotation was enough to provide substantial benefits on long-term soybean yields and their stability while the effects on corn were mostly associated with the temporal niche provided by small grains for under-seeded red clover or alfalfa.

Crop diversification strategies also increased the probability of harnessing favourable growing conditions while decreasing the risk of crop failure. In hot and dry years, diversification of corn-soybean rotations and reduced tillage increased yield by seven per cent and 22 per cent for corn and soybean respectively.

This research supports the practice of using more diversified rotations as a solution to sustainably increase the long-term resilience and productivity of corn-soybean cropping systems.

Deen says over the next two years, the researchers hope to look at the effect moisture has over the span of a year by imposing three different moisture regimes – ambient, moisture replete and drought. In this way, they will exclude rainfall and irrigate so they can compare their results to ambient conditions within one year.

“This will conclusively demonstrate the effect of rotation under different moisture regimes.” 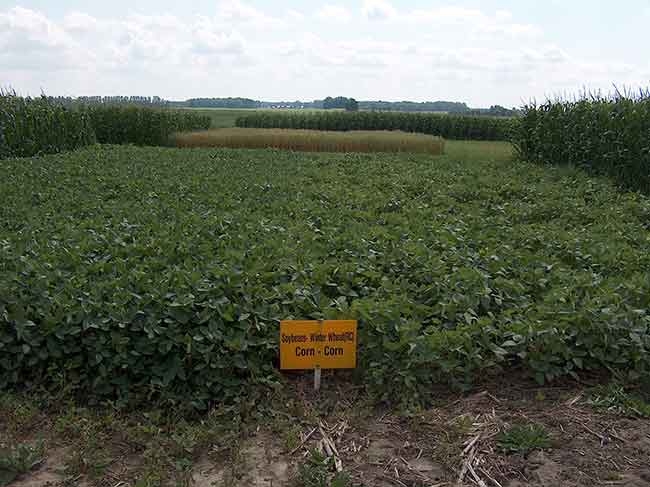 A four-year study is examining whether crop rotation diversity is associated with greater yield stability when abnormal weather conditions occur. Data collected during long-term research trials at Agriculture and Agri-Food Canada’s Elora and Ridgetown research facilities continues to provide researchers with invaluable information about the complexities of crop rotations and their impact on crops.