Pulse crops play an important role in many cropping systems. Along with field pea and lentil, growers are increasingly adding short-season soybeans into their crop rotations. Because soybeans are relatively new in Saskatchewan, growers and researchers are interested in how they compare in rotation to other pulse crops. 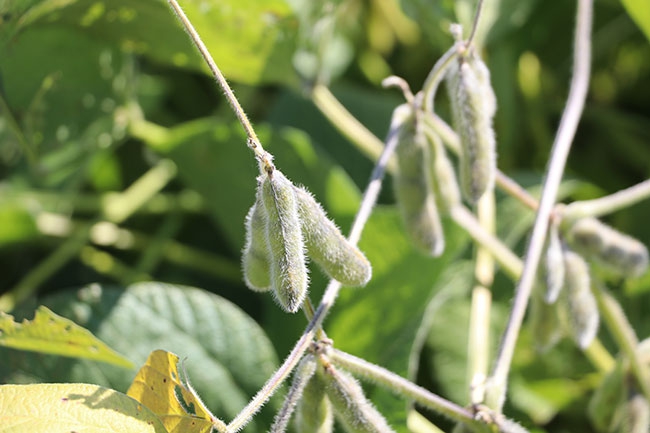 A three-year research project initiated in 2014 and led by Jeff Schoenau, professor and Ministry of Agriculture Strategic Research Chair at the University of Saskatchewan, along with PhD graduate student Jing Xie, and Tom Warkentin of the Crop Development Centre, set out to compare production and rotational contributions of soybean with field pea and lentil at different locations across Saskatchewan. The key objective of the project was to determine the yield, nitrogen (N) fixation, plant nutrient content, uptake and composition of the residue of soybean grown under Saskatchewan conditions. Researchers also wanted to determine the contribution soybean residue makes to nutrition and yield of subsequent cereal and canola crops in comparison to pea and lentil.

In 2014, three varieties each of field pea, lentil and short-season soybeans, along with wheat as a control, were seeded in replicated trials at sites in Saskatoon, Scott, Rosthern and Yorkton, Sask. In 2015, hard red spring wheat was seeded across all of the plots, followed by canola in 2016. Researchers are still analyzing the 2016 project data, with final results expected to be available in early 2017, once Xie’s PhD thesis defence is completed.

“Results from the first year show that short-season soybeans performed very well at all sites, with comparable grain, straw yields and nutrient uptake to the pea and lentil varieties,” Schoenau says. “Some of the sites tend to be more north and west of the traditional soybean growing range, but all of the varieties did very well in all of the trials. Soybean yields were intermediate between pea and lentil at all of the sites. Soybean had higher grain N and [phosphorus] P concentrations, but lower straw N and P concentrations compared to pea and lentil.”

In terms of the amount of N derived from biological N fixation, pea was the highest overall, with soybean equal to or greater than pea in some plots, followed by lentil. The project found soybean had the highest proportion of N derived from fixation of the three pulse crops. Schoenau adds that although soybeans have sometimes been considered to be poorer N fixers, this research showed they are capable N fixers. The results showed soybean N fixation ability was good, with 60 to 70 per cent of its N derived from fixation. Generally 50 to 80 per cent of N in legumes comes from the atmosphere via biological fixation in the root nodules. The actual amount depends on inoculation/nodulation, environmental conditions, soil available N and other nutrients like P. [Click image below to expand.]

“One of the interesting findings was that soybean grain had higher P and [potassium] K content compared to the other crops,” Schoeneau says. “Therefore, when soybean is included in rotation, there is potentially a greater depletion of P and K from crop removals, so that is something growers will want to take into consideration in long-term fertility planning. This can be readily addressed in the following cereal or other crops over the long term.”

In 2015, wheat was seeded across the stubble plots to determine the rotational contributions of the different pulse residues. The results were positive, showing the three grain legume crops had similar effects on the N recovery rates by wheat grown in the subsequent year. Overall, the cumulative nutrient supplies were similar, and did not show statistically significant differences in soils with soybean, pea, or lentil residue either under a controlled environment or under field conditions.

“We didn’t see big differences among the three pulse crops in their contribution to N or to P availability to the following wheat crop,” Schoenau says. “Aside from the fertility aspect, we didn’t see a large difference in any other effects on the following crops at those four sites.”

The results found wheat grown on soybean, pea and lentil stubble had similar grain and straw yield, grain and straw N and P uptake, and residue N recovery ratios at all sites.

Overall, the selected soybean varieties showed comparable agronomic and environmental impacts compared to pea and lentil grown under Saskatchewan conditions. Soybean is a good yielder and N fixer with a similar contribution to the nutrition and yield of subsequent crops compared to pea and lentil. Pulses have a good fit in rotation and this research indicates soybean can be another good option for growers to consider.