What the differences are between these two corn rusts and why that matters. 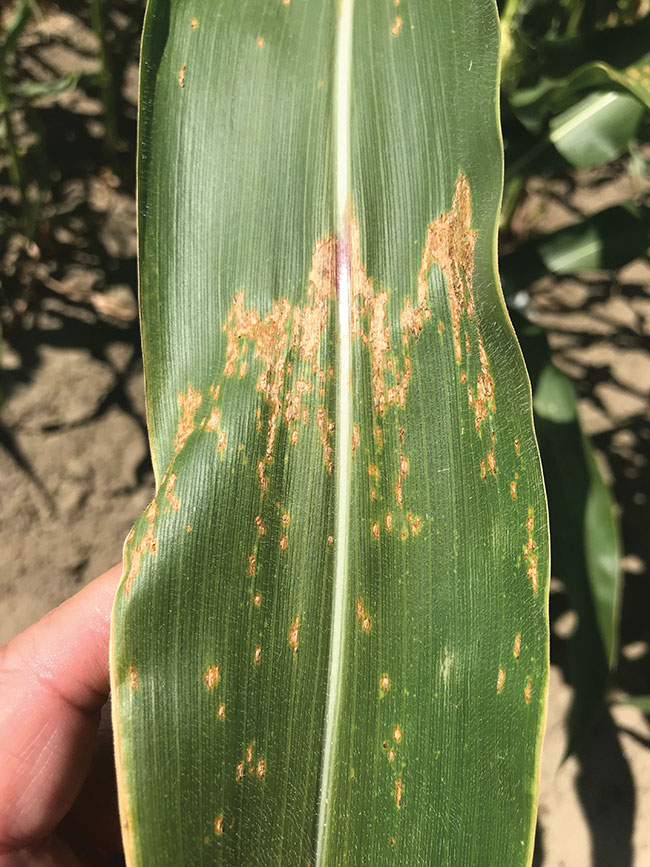 Both common rust and southern rust can cause substantial yield losses in susceptible corn plants, but the two diseases differ from each other in some important ways. With common rust as a longstanding problem in Ontario and southern rust becoming an increasing concern, field crops pathologist Albert Tenuta walks us through the key differences between these two diseases, outlines current research and monitoring work, and offers some management tips.

He notes that common rust is the most common corn rust in Ontario, and it is one of the three most important foliar diseases of corn in the province, along with gray leaf spot and northern corn leaf blight. The occurrence of common rust varies from year to year depending on the weather. For instance, in 2017 it was the most prevalent foliar disease in Ontario corn, and then in 2018 the levels of this disease were much lower.

“Southern rust is still at relatively low levels in the province compared to common rust, although we have been seeing southern rust more often in the last few years,” Tenuta says.

“In 2017, southern rust levels were probably the highest I have ever seen in Ontario, particularly in the southwest where I saw some plots with highly susceptible hybrids that were severely infected.” As well, southern rust’s distribution across Ontario increased in 2017, occurring as far east as eastern Ontario for the first time; in most years, this disease tends to be mainly in the southwest.

Neither pathogen overwinters in Ontario. He explains, “Common rust and southern rust are what we call obligate parasites, so they require living tissue to survive. They won’t survive much more than a few weeks without a living plant host to live on.” For both diseases, corn is the primary host, so when the corn plants die, these pathogens cannot survive.

Both pathogens overwinter in warmer climates farther south and have similar disease cycles. Each growing season, their spores are blown northward from their overwintering regions. If the spores land on susceptible corn plants under favourable weather conditions, the spores will germinate, infect the plant, develop pustules and produce the next generation of spores. The period from infection to spore production takes about one to two weeks, depending on the weather and the pathogen.

The infection cycle will continue to repeat itself on the plant as long as favourable conditions persist. The new spores can be blown further north, into the Corn Belt and then Ontario. If a susceptible corn crop is infected before the tassel stage, the risk of yield loss is high. If the infection occurs towards the end of the reproductive phase, it will likely not have much impact on yields. 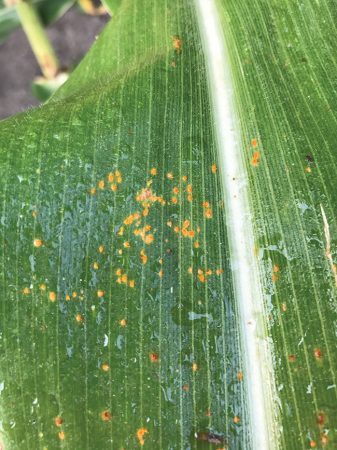 He explains that the increasing levels of southern rust in the Midwest and Ontario in the last few years are likely mainly because of milder winters, like the winter of 2016-17. “The milder the winter, the earlier corn will be planted and the earlier the disease can develop in Mexico, then the southern U.S., the Midwest, and Ontario.”

Both diseases need wind and rain storms to carry their spores on northward. And, of course, the spores require the right environmental conditions in Ontario for the disease to develop in the province’s corn crops.

The two pathogens thrive under somewhat different conditions. Common rust likes high humidity and mild temperatures between about 15 and 25 C. Southern rust also likes humidity but it prefers warmer temperatures from about 25 to over 30 C.

Under the right conditions – favourable moisture and temperature conditions, a susceptible hybrid or inbred, and arrival of the spores early in the crop’s development – both rust diseases can quickly reach damaging levels. “For instance, OMAFRA has done inoculated trials here at Ridgetown in the southwest, and we’ve had up to 36 bushels per acre lost due to common rust on some susceptible lines,” he notes.

Tenuta and his colleagues are collaborating on various activities to advance management of common rust and southern rust in Ontario corn crops. For instance, Tenuta is helping Lana Reid, the corn breeder with Agriculture and Agri-Food Canada in Ottawa, with her work to develop rust-resistant lines.

“Lana has been breeding for rust resistance and has a number of corn rust-resistant or tolerant inbreds and hybrids,” he says. “She evaluates her breeding materials in eastern Ontario, and because we can get both southern rust and common rust in the southwest, we evaluate her materials in the fields here. For common rust, we either inoculate the lines or have natural infection. For southern rust, we depend on natural infection.”

He adds, “Many Ontario hybrids have resistance to common rust. But we haven’t had a lot of screening for southern rust in Ontario, so we have more susceptibility to that disease in our varieties.”

Tenuta and his OMAFRA colleagues also work with Reid’s research team to conduct annual corn disease surveys in the province to assess the incidence and severity of the two rusts and many other corn diseases. He notes, “At the same time, we collect different isolates of the diseases and we use them either for inoculum in the greenhouse or to watch for changes in the different races.”

Tenuta and his colleagues in other provinces and the U.S. also regularly share information on corn diseases and their spread. “We have monitoring systems for rust and other pathogens. And we frequently discuss the movement and potential threats of new corn diseases, like Goss’s wilt and tar spot, and diseases that are here already, like southern rust, that are perhaps expanding their geographical distribution.” The Integrated Pest Information Platform for Extension and Education (iPiPE) tracks the annual spread of several crop diseases, including southern rust, across the U.S. and posts the tracking data at ext.ipipe.org.

Another ongoing task for Tenuta is to evaluate the efficacy of different fungicides for managing diseases like common rust and southern rust, and he works closely with his U.S. colleagues to develop efficacy tables for corn foliar fungicides.

Tenuta says, “A lot of the common fungicide products that are available in Ontario are very good to excellent for controlling both rust diseases.” He adds, “We don’t have as many registered products for southern rust since it is new concern for Ontario, but I would expect new registrations will have both rusts in future.”

“Common rust is definitely a disease to keep an eye on, but we have the tools to manage it,” Tenuta says. So, although southern rust is less common in Ontario, it could be more of a threat when it does appear because there are few resistant hybrids and few fungicides registered for its control.

Tenuta’s key tip for managing both diseases in-crop is to start scouting as early as possible. “The earlier the spores are blown into the province, and the earlier you have favourable weather conditions that allow rust to develop, the greater the potential impact these diseases can have on corn health and yield.”

He adds, “Scouting is especially important for seed corn production because seed corn inbreds are much more susceptible to these rusts than commercial corn. Some of the greatest common rust impacts I’ve seen have been on seed corn.”

Tenuta concludes, “For Ontario, common rust is the most frequent and usually the most important corn rust. However, southern rust is one to keep on the radar, too, with its sporadic distribution and development in the province every year. And if you’re in seed corn production, whether it is southern rust or common rust, remember that they can hit 50 per cent or more yield losses.”