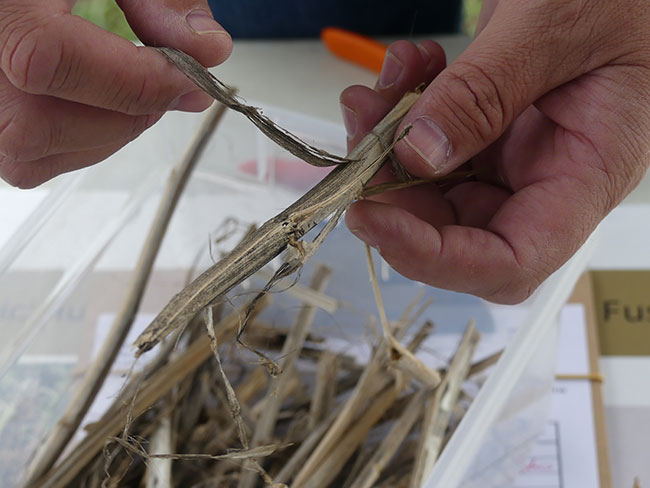 A new Verticillium species was discovered on canola in 2016 in Alberta. Verticillium is a genus of 10 species that cause wilt or stripe in a range of annual and perennial plants, including canola. In Europe, the pathogen is fairly widespread on oilseed rape and has caused significant yield loss of 10 to 50 per cent when the disease is established early in the growing season. While a cause for concern, little is known about the disease impact or control in Western Canada.

“This is a new disease for us and we are still learning about it,” says Sheau-Fang Hwang, a plant pathologist with Alberta Agriculture and Forestry.

Canola infected with Verticillium longisporum was first discovered in Manitoba in 2014. A subsequent survey in 2015 by the Canadian Food Inspection Agency found V. longisporum in Alberta, British Columbia, Manitoba, Ontario, Quebec and Saskatchewan in 263 of 1074 fields surveyed, with the highest concentrations in Manitoba.

Verticillium dahliae is another species in the Verticillium genus that can cause wilt and has a broad host range of more than 200 plant species. Scientists believe V. longisporum is a diploid hybrid and three Verticillium species, including V. dahliae, contribute to its genetics.

“The taxonomy of Verticillium is confusing since many of the species are very similar,” Hwang says.

Symptoms of wilt and the initial discovery

Dark striping on canola stems may be observed and as the crop ripens, the striping becomes more evident. Shredding of the stem on dead plants may occur. Peeling back the outer layer of the stem will reveal microsclerotia that are tiny, black granules smaller than one millimetre in size. Under severe conditions, wilting of leaves may occur.

The absence of large Sclerotinia sclerotia distinguishes the disease from Sclerotinia stem rot. Blackleg would be identified by cutting the canola stem at ground level and observing blackening inside the stem, which does not occur with Verticillium wilt.

In 2016, a field survey in Alberta identified wilt symptoms on canola plants. Hwang and her colleagues at the Crop Diversification Centre North and Stephen Strelkov at the University of Alberta collected and cultured fungi from the plants to identify the Verticillium species. Genetic sequencing confirmed the species as V. dahliae – the first report of V. dahliae causing Verticillium wilt of canola in North America. Further research also found that V. dahliae can infect fababean.

Currently, no effective fungicide seed treatment is available to control Verticillium wilt. Breeding for resistance is thought to hold the most potential for control. However, no R genes have been identified in canola. Plant breeders are looking for resistance sources from other Brassicaceae species.

Crop rotation may offer some control, but Hwang says research has shown a four-year fallow period did not reduce microsclerotial density in the soil. Prevention of soil movement from contaminated areas could be an important management strategy. “We need much more long-term research to determine if crop rotation is effective,” Hwang says.

Since little is known about Verticillium wilt, Hwang says more studies are needed, such as determining the extent and host range of the pathogen and a yield loss model linked to disease severity.