First, the bad news. The spread of Ug99 (a lineage of wheat stem rust) across eastern Africa and western Asia is slow but steady, and new strains continue to appear. There is general consensus that Ug99 will eventually arrive in North America. “In addition,” says Tom Fetch Jr., “a resistance gene that was effective against Ug99 and most other races of stem rust called SrTmp, which has been widely used in winter wheat breeding and some spring wheat breeding, has recently lost its efficacy.”

With this information in hand, you will likely agree that efforts to breed new resistant varieties by Fetch, an Agriculture and Agri-Food Canada (AAFC) crop pathologist and Canada’s leading stem rust expert, and his colleagues at home and around the world continue to be very important.

Ug99 stem rust was discovered in Uganda in 1999 (hence the name Ug99) and is now present in 13 countries, with Rwanda and Egypt being the newest ones in which it’s been detected. Three new strains have appeared over the last few years, which brings the current total to 10. The disease is characterized by the presence of brick red, elongated, blister-like pustules that often lead to the death of the plant. Towards the end of the growing season, black spores are produced which overwinter and later can infect the alternate host (barberry shrub) in the spring. It’s estimated that 80 to 90 per cent of global wheat varieties are susceptible to the Ug99 strains. The strains are unique in their ability to attack the Sr31 gene, which was the only one protecting many of the world’s wheat cultivars.

The good news, Fetch notes, is that he and his colleagues at the AAFC Cereal Research Centre understand the disease quite well and are achieving success using genes in combination to create multi-gene stacks of resistance. Indeed, over the years, AAFC has invested over $14 million to develop new resistant wheat varieties and fund other related Ug99 work. “We’ve identified three new genes, we’re identifying molecular markers, and we’re examining other sources of resistance,” Fetch explains. “We also receive isolates from Kenya and Eritrea and test them to see whether it’s a new Ug99 strain or something else.”

The two Canadian varieties with the best resistance were AC Cadillac and Peace, but AAFC has just released a new registered cultivar called AAC Tenacious. “It has a good resistance complement, a two-gene stack, with one providing what’s called ‘seedling’ or ‘all-plant’ resistance that works throughout the life of the plant,” Fetch explains. “The other gene provides ‘adult plant’ resistance, which is not effective at the seedling stage but begins working at later stages of the plant. The genes work in tandem to restrict the size of the rust infection. The pustules will be smaller and spore production will be lessened so that the plant can tolerate Ug99 infection and still produce seed.” He notes that AAC Tenacious also has good Fusarium head blight (FHB) resistance and says that wheat breeders can use it as a dual source of both stem rust and FHB resistance.

It is expected that more varieties with this two-gene resistance stack will be released by AAFC in the near future. “As with most crop breeding, it’s a multi-year process,” Fetch notes. “For several years before he recently retired, Dr. Doug Brown at AAFC in Winnipeg developed many crosses with the ‘Cadillac’ resistance to Ug99, so a lot of his work will bear fruit in the coming years.”

Over the years, AAFC has also sent seed of resistant Canadian varieties to wheat breeders in the United States and at the International Maize and Wheat Improvement Center (CIMMYT) in Mexico, so that breeders there can develop improved local varieties in affected areas and areas most at risk of spread. “Many fungal pathogens affect wheat, but stem rust is really dangerous and can cause 100 per cent losses in wheat over a short period of time,” Fetch explains. “In affected areas of Africa such as Kenya, where there is family subsistence-level farming, it can be devastating.”

Wind is the most common cause of Ug99 dissemination. The spores are picked up and blown long distances, causing the disease to move incrementally across adjacent countries and has been documented to traverse oceans. “If it gets to China, that would be very concerning,” Fetch notes. “We know there have been events where dust particles have blown across from China to North America, and a rust spore is equal to or even lighter in weight compared to these particles.” There is also another way Ug99 could turn up in North America – and that’s through human transfer. “Rust spores can be transported on clothes,” Fetch says. “This is how stripe rust was introduced into Australia. We don’t know how likely it is or how soon Ug99 could be introduced into North America in this manner, but the more Ug99 spreads, the greater the chance that someone – or wind currents – could bring it over here.”

Iran is of particular concern in terms of Ug99’s spread, because of a common native shrub called the barberry which is susceptible to stem rust. Ug99 normally reproduces asexually, releasing billions of spores that are mostly clonal, although mutation to new strains occurs frequently. However, if the barberry bush gets infected, sexual reproduction of Ug99 with other stem rust strains already present can occur. This allows genetic recombination of virulence genes from both parents, with the possible development of offspring with different traits than either parent and a high potential for new virulent strains to appear. Fetch has recently begun collaborating with scientists Marcia Chavez and Jose Martinelli in Brazil, as barberry is native to that country as well. They have just begun identifying the types of rust that infect barberry there.

Stem rust has been uncommon in wheat and barley in Canada for over 60 years, because wheat breeders and pathologists have ensured varieties with good resistance were produced. Albert Tenuta, Ontario Ministry of Agriculture, Food and Rural Affairs (OMAFRA) field crop pathologist, stresses that although a lot of attention is put on Ug99, there is also the possibility that a new stem rust race could develop here in North America.

Having said that, Tenuta and Fetch are both hopeful as a great deal of breeding work is being done.  There also are new fungicides always being developed which are very effective against not only stem rust, but other cereal rusts such as stripe and leaf rust. “However, we need to be vigilant,” Tenuta says. “We now have two generations of growers that haven’t seen stem rust, but we do talk about it in presentations on other invasive species, so hopefully some awareness is there. We are covering our bases from both a monitoring and surveillance perspective – in collaboration with AAFC and the wheat industry – and taking proactive measures.” 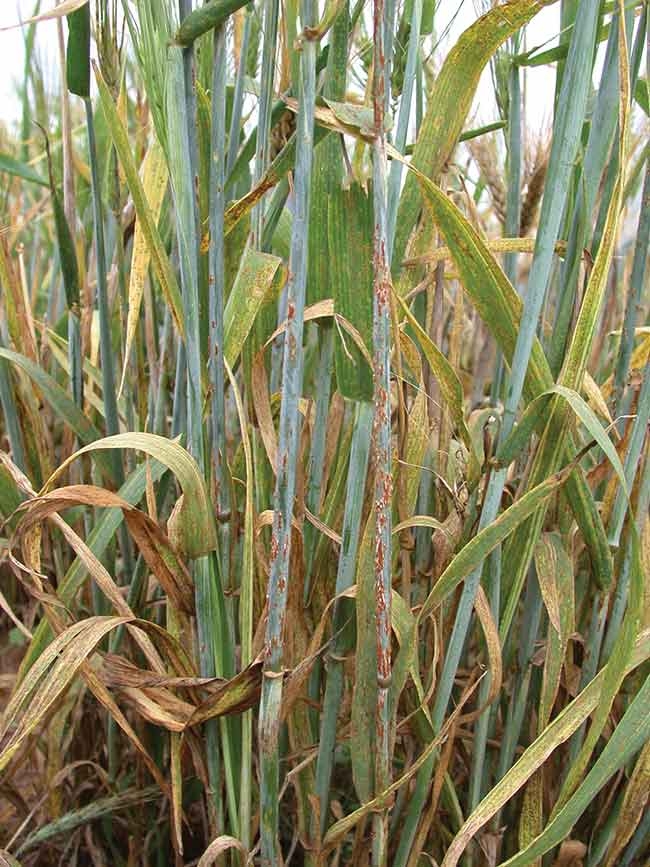