A 2011 study on the use of a biological seed treatment for control of clubroot in canola yielded disappointing and reaffirming results. Research scientist Gary Peng at the Saskatoon Research Station of Agriculture and Agri-Food Canada (AAFC) was interested in learning whether a biofungicide using Bacillus subtilis would help control clubroot impact.

Previous research had found that a liquid formulation of the biofungicide Serenade ASO was highly suppressive to clubroot under controlled environment conditions when applied as a soil drench. Serenade ASO also boosted efficacy of a moderately resistant canola variety against a heavy load of clubroot pathogen inoculum.

In a study that included several components, new granular Bacillus subtilis formulations and a seed dressing method were developed to see if the biofungicide would work under field conditions. The new formulations were developed because the liquid formulation of Serenade ASO would not be practical for most canola farmers.

In one trial, granular formulations were applied in-furrow during seeding to clubroot-resistant and susceptible canola varieties at three locations in Alberta and northern Quebec. In the other trial, the seed dressing was applied to a clubroot-susceptible variety seeded to different crop rotation plots that had a one-, three- or 11-year break from canola. Clubroot pressure was high in all plots, with a high disease severity index (DSI).  Unfortunately, none of the granular formulations or seed treatments reduced clubroot substantially.

Resistant variety proves value
In the three field trials at Leduc and Edmonton, Alberta, and Normandin, Quebec, the resistant cultivar 45H-29 reduced the DSI to below 15 percent while the DSI for the susceptible variety, 45H-28, ranged from 69 to 98 percent. The granular biofungicide or fungicide (Allegro and Ranman) formulations did not have any affect on DSI or yield.

The lack of seed treatment response was disappointing, as Peng explains: “Cultivar resistance to clubroot is generally race specific, and historically this type of resistance is not durable because it can be eroded when pathogen race structure changes. Although variety resistance may be a cornerstone for clubroot control on canola, additional measures may help the performance and longevity of resistant cultivars.”

Longer rotations help manage clubroot pressure
Starting in the early 1990s at the northern Quebec research site, a 2.8-hectare field has been used for a crop rotation study with a total of 112 large plots with canola-barley-field pea-barley-canola, canola-field pea-barley-barley-canola, and canola-barley-barley-field pea-canola rotational systems, and continuous field pea or barley. The field was heavily infested by clubroot for over 20 years, and was chiselled or plowed in the fall annually. These rotation plots provided choices of varying break duration from a previous canola crop.

In this second trial, plots with one- and three-year breaks were selected to represent two-year and four-year crop rotation in canola production, and plots that had been 12 years out of canola were used as an extreme scenario for comparisons only. Two tests, seeded on June 5 and June 15, 2011, were set up comparing the effect of the biofungicide seed-dressing on the susceptible cultivar 45H-28.

The biofungicide provided no benefit, but Peng found that longer rotations helped reduce the clubroot severity. “Longer crop rotation often reduced gall size slightly, showed much milder above-ground damage, and increased the yield significantly relative to short rotation in two separate trials,” he explains. “Even a three-year break from canola was highly beneficial, with the yield doubled as opposed to that with only a one-year break from canola.”

“This was the first time that the benefits of a longer rotation were demonstrated for clubroot management in a research trial,” adds Peng.

Peng understands that economics are driving the tighter canola rotations now common on the Prairies, but cautions that producers need to be aware of the consequences of increased disease pressure, including clubroot and blackleg.

“If shorter rotations are used, a resistant cultivar should be considered to minimize the negative impact of clubroot, especially on fields with heavy infestation,” says Peng. 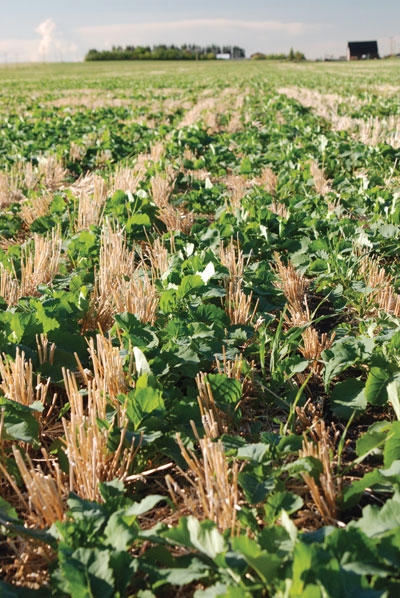 An Agriculture and Agri-Food Canada study completed in 2011 proved that longer rotations helped to reduce clubroot disease severity and impact on yield. A 2011 study on the use of a biological seed treatment for control of clubroot in canola yielded disappointing and reaffirming results.