The warning bells rang loud and clear in 2013 when a shift in clubroot pathotypes overcame clubroot-resistant canola varieties on the market. Tests found the pathotypes present were capable of overcoming most of the clubroot-resistant canola hybrids. Because this breakdown in resistance wasn’t unexpected, plant breeders have continued to look for alternate sources of resistance that can be bred into new varieties to help manage the multiple pathotypes that have been identified in Alberta. 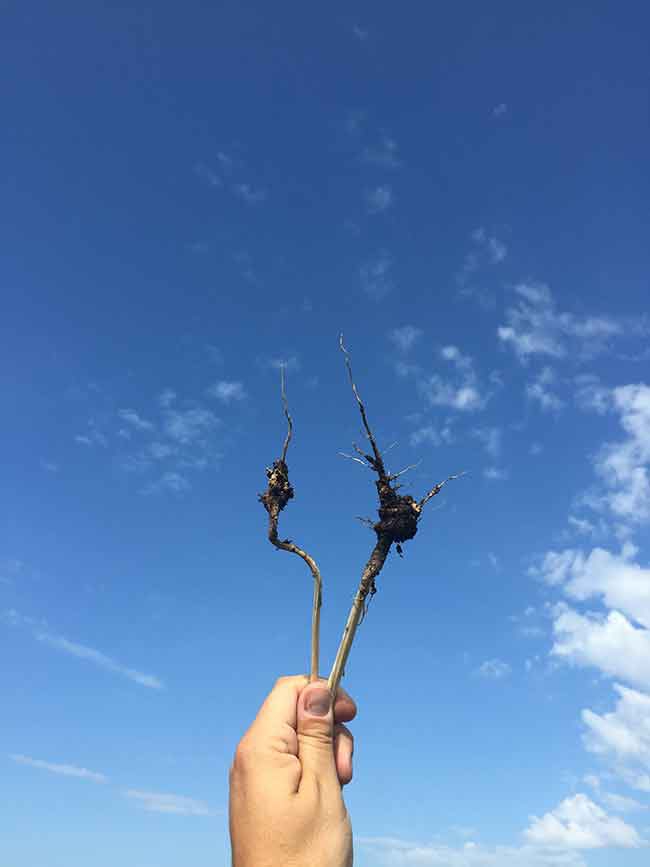 Habibur Rahman, a plant breeder at the University of Alberta, has been searching for new sources of resistance for several years. “We searched for resistance in six Brassica species and screened for resistance against the predominant pathotypes,” Rahman says.

Pathotypes 3 and 5 have been the most common clubroot types in Alberta, and previous clubroot-resistant canola varieties carried a gene resistant to these pathotypes. However, due to lack of adequate crop rotations and reliance on a single resistance gene, a shift in pathotypes occurred, and in 2013, the first case of resistance failure occurred.

Field surveys by Alberta Agriculture and Forestry in 2014 and 2015 found nine new pathotypes, including 5x, which was highly virulent on the existing clubroot-resistant varieties. These surveys indicated new sources of genetic material were urgently needed.

Developing multi-gene clubroot resistance
From the 275 accessions, Rahman identified two sources of clubroot resistance (CR), and named them CR gene 1 and CR gene 2. The CR gene 1 was bred with two different canola parent lines totaling a few hundred second-generation (F2) plants assessed and selected for clubroot resistance. A major dominant gene was found to confer resistance to pathotype 3. Selection continued and focused on further improvement to agronomic and seed quality traits. Some of the selections were done in partnership with Crop Production Services (CPS) under a long-term agreement. Genetic markers were developed to speed line selection during plant breeding.

“Our programs are virtually integrated so that we have been working together almost since the inception of the search for resistance,” says Andy Andrahennadi, senior plant breeder with CPS Canada at Saskatoon.

The breeding of the CR gene 2 into canola parent lines followed a similar process, but was more challenging since the genetic source had high erucic acid and glucosinolates content, according to Rahman.

Genetic markers were also developed for the CR gene 2, and further breeding resulted in clubroot-resistant lines with improved agronomic traits and canola-quality seed.

Crop Production Services introduced the two, novel genetic lines into their hybrid canola breeding program. During the breeding phase, CPS utilized both resistant lines to develop a new hybrid with stacked resistance that included both the CR gene 1 and CR gene 2.

Stacking the genes provides a greater degree of resistance to multiple pathotypes, and can also help delay the breakdown of resistance.

“If we look at the broad strategy for clubroot control, what we are seeking is diversity in genetic resistance. It is the same strategy as for blackleg. We need to develop multigenic sources and use them in combination to try to stay ahead of the pathogen,” says Bruce Harrison, director, research, development and innovation, with CPS.

The first CPS hybrid registered with the stacked clubroot resistance genes was PV 580 GC from Proven Seed, which was released to farmers on a limited basis for 2016. It is the first true multigenic clubroot-resistant canola variety. PV 580 GC is a mid-season Genuity Roundup Ready hybrid rated R for clubroot, blackleg and Fusarium wilt. Research has shown the multi-gene resistance in PV 580 GC is resistant to pathotypes 2, 3, 5, 5x, 6 and 8.

“In our field tests in Alberta, we have seen good resistance to all the pathotypes present but we know that the pathotypes continue to evolve. We’re in a race to develop new sources of resistance to the pathotypes,” Andrahennadi says. “Using multigenic stacked resistance is a prudent strategy to provide durable resistance. Good stewardship of the traits with longer crop rotations is also very important in helping slow down the evolution of the pathogen.”

Crop Production Services continues plant breeding efforts with the multiple resistance genes and with genes from other sources, such as from Gary Peng’s program at Agriculture and Agri-Food Canada in Saskatoon. PS-ARK 14-3562 received interim recommendation from the Western Canada Canola/Rapeseed Recommending Committee in February. This hybrid also has two clubroot resistance genes to further improve clubroot resistance and durability.

Additionally, Andrahennadi says CPS has 52 hybrids in field trials with two or three clubroot resistance genes. Depending on performance, more hybrids with two to three stacked clubroot genes could be submitted for registration in February 2017.

“PV 580 GC was a new hybrid that had pretty good agronomics, and was the first in the field with multigenic clubroot resistance. It was mission accomplished to prove we could get a good resistant hybrid into the marketplace. But we have many more in co-op testing with two to three genes and improved blackleg resistance with stacked resistance traits as well,” Harrison says. “To some degree, we’ve soft pedaled in making claims on how good the clubroot resistance is, but our field trials are showing these new sources of resistance stacked into a hybrid are providing leading resistance against many clubroot pathotypes.”

Rahman also continues to search for additional sources of resistance at the University of Alberta.

A single-gene clubroot-resistant canola hybrid with galls indicates a breakdown in resistance.