Root rot diseases are a major constraint on field pea production in Canada and in other regions of the world. A number of pathogens comprise the field pea root rot complex in Western Canada. Fusarium root rot is the most prevalent soil-borne disease of field peas in Manitoba. Rhizoctonia root rot is also widespread. These diseases can severely reduce seedling emergence, quickly destroy the plant’s root system and limit the ability of crops to compete with weeds and to fix nitrogen.

An average yield loss of 57 per cent in severely affected pea plants has been reported. In Manitoba, 100 per cent of pea fields surveyed since 2008 have had root rot. During this time, mean disease severity of root rot was higher in recent years from 2010 to 2013. It has been demonstrated that Rhizoctonia solani isolates from field peas could infect soybeans and dry beans, so inclusion of these crops in long-term rotation could lead to more serious problems with root diseases. The root rot pathogens build up quickly in the soil where they can persist for long periods of time, so this disease cannot be completely controlled through crop rotation.

The development of root rot resistant cultivars is generally recommended as the best method for the control of these root diseases. However, the screening of candidate cultivars of field peas for root rot resistance is not a requirement for cultivar registration in Canada. For this reason, the reactions of commercial field pea cultivars to the most common root rot pathogens are unknown. In the past, patchy disease distribution within fields has hampered selection for resistance to root rot pathogens. However, improvements in inoculation procedures have enabled the establishment of uniform tests for Rhizoctonia and Fusarium root rot. Complete resistance to the root rot pathogens has not been identified.

Much of the research on Fusarium root rot has concentrated on screening cultivars and germplasm lines for resistance to F. solani, but recent research and surveys have shown that F. avenaceum has become the most common root pathogen of field peas on the Canadian prairies, so further research is needed to screen field pea cultivars and accessions for their reactions to this pathogen. Field studies at Agriculture and Agri-Food Canada (AAFC) at Morden, Man., between 2002 and 2012 showed that the field pea germplasm line Carman carries partial resistance to root rot caused by F. avenaceum, F. solani and R. solani.

Field trials, partially funded by the Manitoba Pulse Growers Association, will be conducted at AAFC-Morden and AAFC-Brandon to evaluate the root rot resistance of approximately 60 Manitoba field pea cultivars each year (2013-2017). Dr. Robert Conner is the lead AAFC scientist with collaboration from Dr. Debra McLaren and Dr. Maria Antonia Henriquez. Inoculated field experiments will be carried out to separately assess the root rot reactions of the field pea cultivars to R. solani, F. avenaceum and F. solani. Field experiments will include Manitoba field pea cultivars as well as the partially resistant germplasm line Carman and two susceptible check cultivars. Results from the 2013 field trials will be available in the near future.

This research on root rot resistance and tolerance has been identified as a priority area for the Manitoba Pulse Growers Association in order to prevent yield losses caused by root disease. Meeting the challenge for long-term production of field pea requires the use of pest management strategies that are effective, economical and sustainable. This study will identify commercial field pea cultivars with partial resistance to one or more of the prevalent root rot pathogens. Improved disease control will ultimately result in increased competitiveness and profits by increasing yields, reducing risk and enhancing opportunities for field pea. 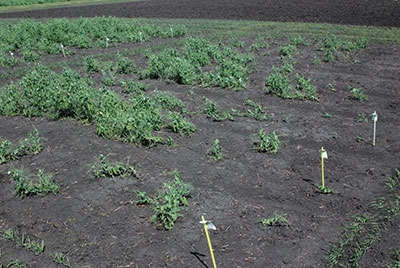 Root rot is becoming an increasingly damaging issue for Manitoba pea growers. Root rot diseases are a major constraint on field pea production in Canada and in other regions of the world.