Many areas of the Prairies are at risk for developing salinity or already have salinity issues. Whether the salinity developed naturally or was induced by human activities, salinity will just keep getting worse unless mitigation efforts are initiated.

Many areas of the Prairies are at risk for developing salinity or already have salinity issues. Whether the salinity developed naturally or was induced by human activities, salinity will just keep getting worse unless mitigation efforts are initiated

Glenn Friesen, forage specialist with Manitoba Agriculture, Food and Rural Initiatives at Carman, Manitoba, says the challenge for many crop producers is that the best option usually includes taking land out of crop production and establishing perennial forages. “Headland salinity is becoming more of a problem for many farmers, especially in wetter areas and often it has to be addressed with forage establishment,” says Friesen. “That’s a difficult thing to talk about because how can you make money out of growing cattle or hay on this land?”

Headland salinity occurs when water in ditches moves down in the soil, picks up soluble salts, and then moves laterally into the field where it moves upward, evaporating and leaving the salts in the rooting zone. “To put things into perspective, if you look at the land use map from the 1996 Census, there is fairly significant risk of salinity, and we know that more than a decade later there is still fairly significant risk in areas like the Red River valley,” says Friesen.
Saline soils are often found where the water table is within two metres of the soil surface. If excess groundwater builds up in a recharge zone, the excess water moves laterally, and on the way it picks up and transports soluble salts, eventually depositing them just beneath the discharge area where the water evaporates and leaves the salt deposits.

Forages provide a biological solution
Barley is one of the most salt-tolerant grain crops but when salinity levels get too high for barley production, perennial forages often become the only biological solution.
The advice for growers is to pick forages that are adapted to their environment and determine the purpose of the forage. “Is it for yield or just for land cover?” asks Friesen. He says growers cannot have both and if they try to do both, stand establishment and longevity will be compromised.

MAFRI has a forage adaptability chart that provides a good cross-reference of forage features, including characteristics like longevity, flooding tolerance, salinity tolerance, winter hardiness and preferred climate and growing conditions. Friesen says that a good strategy is to plant a mixture of four grasses to achieve the best stand establishment and longevity. “When you boil it down, you end up with about seven species with high or very high tolerance to salinity,” says Friesen. “We tend to focus on tall wheatgrass but its problem is that it is slow to establish. When it does get going though, it is probably the best performer we have right now.”

A new option is green wheatgrass, a cross between Eurasian bluebunch wheatgrass and quackgrass that originated in Turkey. The difference between green wheatgrass, tall wheatgrass and the others is that green wheatgrass has good palatability. It also remains green longer in the fall, and has aggressive rhizomes, similar to those of smooth bromegrass, or about half that of quackgrass. This allows the plant to spread out to compete with weeds and increase the groundcover. Wheatgrasses are typically bunch grasses that do not spread out.

Plant breeders at Agriculture and Agri-Food Canada at Swift Current, Saskatchewan, have bred a Canadian variety called AC Saltlander using Turkish germplasm. AC Saltlander is based on Turkish selections of a natural cross between bluebunch wheatgrass and quackgrass.

NewHy, developed at the Agricultural Research Service Laboratory in Utah, is a similar concept but is based on North American germplasm, so is not a green wheatgrass. NewHy is based on American selections of the American bluebunch grass and quackgrass-cross. Although it could be assumed that AC Saltlander and NewHy are the same, they are actually not because the Turkish strains of bluebunch wheatgrass and quack are different than American versions.
Friesen points out that AC Saltlander is a fairly aggressive species and caution should be used if it is grown near natural Prairie habitat as it could become invasive on native pastures. There were also some early issues with downy brome contamination in the seedlots, so farmers should ensure their seed source is free of weeds.

Research from the Canada Salt Tolerance Lab at Swift Current found that AC Saltlander survived very well on both pasture and hay land. NewHy also survived well on pasture and hay land, but was not quite as salt tolerant as AC Saltlander. Tall wheatgrass, which is the predominant saline grass grown on the Prairies, survived quite well as a hay crop, but not as pasture. “So if you are looking for a pasture option, tall wheatgrass is not an option. On the other hand, tall wheatgrass could tolerate two to five weeks of flooding, but AC Saltlander and NewHy could not,” cautions Friesen.

Tips for forage establishment
Seed as early as possible. Plant tolerance to saline soils tends to drop off as temperatures warm up in the summer, so Friesen says early stand establishment when the soil is cool and moist is preferred. However, saline soils are usually wet, so early seeding can be difficult. He says that frost seeding in late March or early April, where seed is broadcast on frozen ground has worked well. “It is a pretty well-established technique used in the cattle industry, and we have seen really good results,” Friesen says.

Seeding rates should be doubled and seed should be placed shallow. Perennial weeds should be controlled before seeding.

Friesen cautions that a forage mix should be chosen for salinity control, and not for yield. Some forage companies market mixes aimed at producing maximum yield on good soils, but they do not have the best adaptation on saline soils. “Stick to the standards like tall fescue, slender wheatgrass and tall wheatgrass and then add in others based on availability and pricing. Alfalfa is a really good option. It won’t establish well in the saline area, but it will establish on the fringes where the salinity isn’t as high and with deep roots alfalfa will help to contain the salinity in the area by drawing down moisture,” explains Friesen.
Native grasses are also a good choice when their seed price is low, says Friesen. Green needle grass, big blue stem and little blue stem are moderately tolerant of saline soils and longer lived than some of the commercial grasses.

“I can’t stress enough that when you plant forages in saline areas the production is always reduced because of the inhospitable soil,” says Friesen. “And you have to keep in mind, with saline soils, there are no quick fixes.” 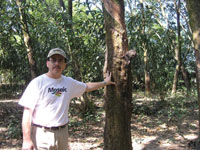