An ignored little roadside weed, Canada fleabane, has defeated Roundup in the southwest corner and is quickly spreading northeast. 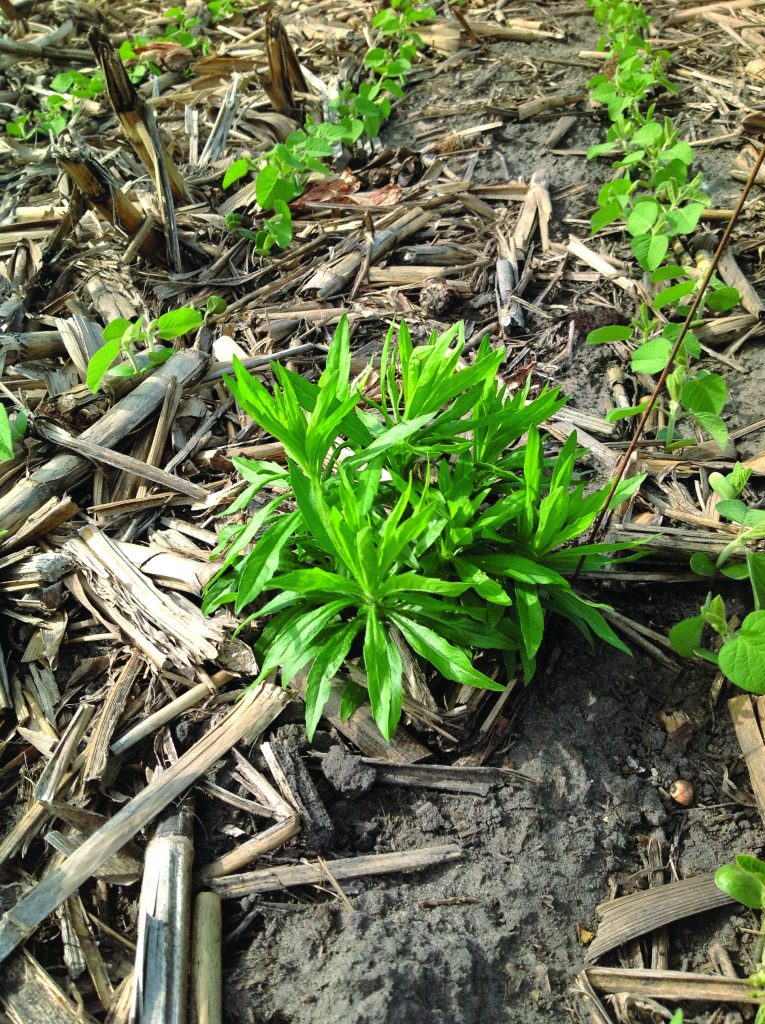 Regrowth after a glyphosate application. An ignored little roadside weed

Ontario farmers can manage it in corn and in cereals, but they will have a challenge with glyphosate-resistant (GR) Canada fleabane in soybeans.

“It’s a real challenge in soybeans because the post-emergence herbicides we have for soybeans aren’t particularly good on GR Canada fleabane,” says Peter Sikkema, professor, field crop weed management, at the University of Guelph Ridgetown campus.

A fresh photo of Canada fleabane, a familiar but harmless weed, arrived in Sikkema’s e-mail in the summer of 2010. An ag retailer in Essex County was asking him to confirm the identification.

“I replied that it looked like Canada fleabane, why did you ask? The ag retailer replied, we put on twice the rate of glyphosate and it’s still healthy,” Sikkema recalls.

That fall, seeds were collected and screened in the greenhouse for glyphosate resistance. His team identified eight fields with GR Canada fleabane in the southwestern county, near Windsor.

“Based on seed collections in 2010, 2011 and 2012, we now know there are at least 155 fields with GR Canada fleabane in eight counties,” he says. “It moved more quickly than I would have anticipated. It started in the southwestern tip of the province and is progressively moving east and north. It has reached east to Niagara County and north to Huron County.”

He adds that in 19 of the 155 fields identified by the end of last year, Canada fleabane was resistant to both glyphosate and the Group 2 herbicide cloransulam-methyl (FirstRate).

Over time, it is expected it will be found in a wider geographic area in the province.

Unlike ragweed, seed of Canada fleabane is designed to be airborne.

Like a dandelion
Canada fleabane seed is like a dandelion seed, says Chris Snip, an Agris Cooperative crop sales specialist in Cottam, Ont.

“It’s very light. If a guy’s got it, it will blow out the back of a combine and go wherever the wind blows,” Snip says. “Combines work as great planters for it.

If one goes through a combine, the next year you end up with a patch as wide as the combine will spread.”
Canada fleabane starts as a small rosette, like a dandelion. Then it bolts upward.

At maturity it stands taller than soybeans. It will look similar to goldenrod at that point, loaded with fluff and seed.
It’s always been along roadsides and fencerows, but not as a prominent crop weed, according to Snip. It germinates in any month that the ground isn’t frozen solid.

“It becomes more of a field weed with no-till. Tillage kills it quite easily. If a guy goes through it and tills the soil, very few survive, if any,” Snip says.

It migrated into fields, and soybeans, with the widespread use of no-till and widespread dependence on glyphosate plus Group 2 herbicides. “Pretty well every farmer has it now on at least one field,” Snip says.

“We couldn’t control it with our burndown. It was only a couple inches tall, but it was like a carpet. I was just flabbergasted,” Snip says.

Control options
The crop advisor says soybean growers have three basic options if they have GR Canada fleabane: tillage, a pre-emerge burndown or a post-emerge treatment with a new product.

Producers are reverting to using some secondary tillage today to try to manage some of their weed problems.
“A lot of vertical tillage machines have been purchased in the area in the past couple years,” notes Snip. “Those don’t completely remove the fleabane as much as a cultivator.”

Ahead of planting, some growers are using a 2,4-D Ester for burndown, mixed with glyphosate. It works, but planting must be delayed seven to 10 days.

Another option is a new Group 14 herbicide from BASF, Eragon, which is doing very well.

“Eragon uses the Kixor molecule that BASF launched a few years ago,” Snip says. “We have to mix it with glyphosate and lay it on top. We do need good coverage and high water volume. We do need to get that product on every growing point of the fleabane. It’s not 100 per cent control but it does work quite well.”

Late-emerging GR fleabane can be managed in soybeans with a fourth option, a Group 2 herbicide called FirstRate.
“Some fleabane is glyphosate and Group 2 resistant, so the FirstRate won’t touch it. And, there’s no way to know about that ahead of spraying,” Snip says. “About 70 per cent of the time, I’ve been getting good control in the crop with FirstRate, but I don’t make any promises. We try, and see what happens.”

An old PSII Group 5 inhibitor, Metribuzin, also is showing some success according to Snip. Metribuzin can be sprayed as part of the pre-plant burndown. Several growers are helping to determine rates that will give acceptable control in an optimal range for the product, with safety for the crop ahead.

The GR fleabane also is getting into corn in southwest Ontario. Growers can use a dicamba-based herbicide (Banvel,
Distinct or Marksman) in corn as their first choice to control the weed, but there are other options for control and many restricted application areas where growers can’t use dicamba or 2,4-D.

They must observe a two-mile-wide buffer zone for these products around greenhouses and vineyards.

Sikkema is testing out other options, too.

“The options we have for managing GR Canada fleabane are fairly limited, but we have an extensive research program looking for new ways to manage this weed in soybean,” he says.

“Eragon, Integrity, Broadstrike or Sencor have given us the best results to date, but those are preliminary results that we need to confirm this year.

“We’re also doing a lot of research with the Enlist Duo from Dow AgroSciences, in Enlist corn to manage GR Canada fleabane.

“And, we are looking at how to manage multiple-resistant Canada fleabane, and what to do if you have both glyphosate-resistant biotypes in the same field. There are lots of questions. We hope to have new recommendations in place for the 2014 crop.”