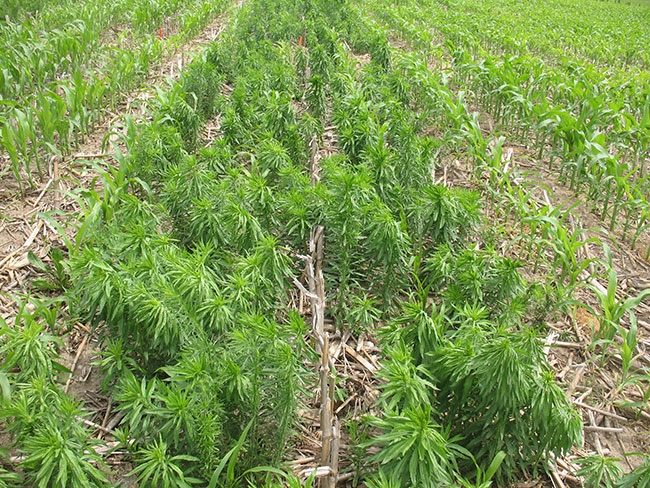 The problem is only getting worse: not only has it spread to 30 counties in Ontario inside of eight seasons, but it now has multiple resistance [glyphosate (Group 9) and FirstRate (Group 2)] in at least 23 counties. A team of researchers from the University of Guelph’s Ridgetown Campus have spent the past seven growing seasons trying to determine best management practices to tackle the tenacious weed.

“It has spread very quickly across southern Ontario, far faster than other glyphosate resistant weed species in the province,” says Peter Sikkema, a professor in field crop weed management and the lead researcher of the University of Guelph study. “I wish I could say that I predicted that it would spread so quickly, but I did not. It moved far faster than I would have expected.”

According to a survey completed by Stratus this past year, 25 per cent of Ontario farmers in resistant-prone areas reported resistant populations on their farms. While the survey did not ask individual farmers to report what percentage of their acres were affected or to what degree, there is no question that resistant fleabane is cutting into profits for a large number of producers.

“That’s certainly a worst-case scenario, but those are real numbers taken from real farms. While not everyone is going to have that level of infestation, it does reflect how bad it can be,” he says.

In Enlist corn, a two-pass program of an effective preplant herbicide followed by Enlist Duo applied post-emergence achieved complete or near complete control.

The good news, Sikkema says, is that GR fleabane can be well managed in corn in Ontario using various herbicide groups. The bad news, of course, is that weed management costs will increase, cutting into net returns to farmers.

Not-so-good news for soybeans
The team tested all 29 broadleaf herbicides registered for use in soybeans in Ontario, including pre-plant, pre-emergence, and post-emergent options. Not a single one consistently provided acceptable control.

The post-emergence options were the most disappointing. “With the exception of dicamba in Xtend soybean, we found that none of the post-emergent options even provided more than 50 per cent control,” Sikkema says. “What this means is that GR fleabane absolutely has to be controlled before soybeans emerge from the ground.”

A Roundup plus Eragon tank-mix serves as the backbone for managing GR Canada fleabane in soybean. However, on its own it is inconsistent, providing 90 per cent control only about 50 per cent of the time.

“If I advise Ontario producers to use Roundup plus Eragon, I will be right half the time and wrong half the time. That’s a terrible position to be in,” Sikkema says.

“In a corn-soybean rotation, I want to stress that we are putting a lot of pressure on the Group 4 (dicamba)-based herbicides,” Sikkema says. “When you look at herbicides that are soil-applied or applied post-emergently in corn crops, yes we have a number of options. On the surface it looks like there are lots of different modes of action, but in reality, it’s the Group 4’s that are doing all the heavy lifting.”

Therefore, he stresses the importance of growers including other herbicide groups in their long-term weed management program. The single best way is to have a diverse crop rotation with multiple herbicide modes of action over time.

“Every farm is different. Every farm has different options in terms of what they can include in rotation. In southwestern Ontario, quite a few farms add vegetable crops into rotations; others add dry beans. Some have beef or dairy so they can add forages into the rotation. Anything that introduces diversity into the weed management program is a real positive,” Sikkema says.

He also suggests incorporating winter wheat into long-term crop rotation, as that crop gives growers the option of applying Infinity (Group 6 plus 27).

Limiting fleabane emergence
Canada fleabane can emerge virtually every month of the year. It has a high rate of overwintering success as a winter annual or it can appear as an annual in early spring despite a farmer’s best fall burn-down efforts. Once a single resistant plant begins growing in a field, its ability to self-pollinate and its high seed production (up to one million seeds per plant) means a significant resistant population can appear from seemingly nowhere.

“It’s not perfect but it’s another tactic in a long-term weed management strategy,” he says.

Growers not yet tackling GR fleabane should not make the mistake of sitting idly by. With resistant fleabane now growing in ditches and parks, along stream banks and in highway medians, the seedbank is huge.

Seeds are built to be carried long distance in the wind. Though studies show 99 per cent of seeds fall within 100 metres of the parent plant, seeds can travel as far as 500 kilometres under ideal conditions. As such, scouting is a huge priority for resistant fleabane.

Farmers need to be scouting all their fields. Scouting early and on an ongoing basis is especially the case in soybean, since a farmer needs to know before the soybean emerges whether they have resistant fleabane in their field.