Making the most of these temporary, hereditary stress responses in plants. 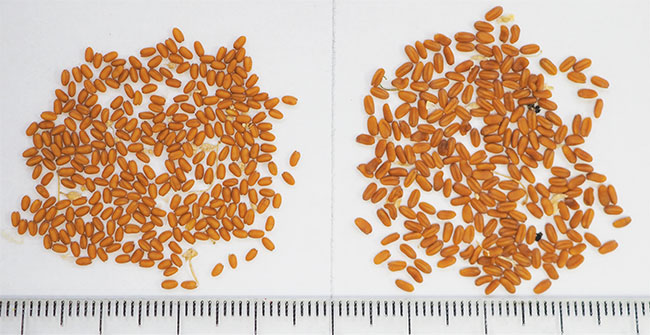 Parent and his research team are altering the epigenetic landscape of different plants to evaluate their hidden potential. In the above picture, a wild-type line of the oilseed plant Camelina sativa (left) has been epigenetically modified (right), leading to larger seeds. The team is now trying to identify which part of the genome is causing the change. Photo courtesy of Jean-Sébastien Parent.

Plants have clever ways of quickly adapting to environmental stress. They can even pass these changes on to their progeny without changing their DNA sequences. The study of epigenetics focuses on these kinds of changes.

Researchers are looking at whether they can make some of these natural adaptations to stress permanent – or use them to find markers to guide the selection process in breeding programs.

As an example, plants subjected to a particular kind of stress over a few generations, like drought, can develop improved tolerance to that stress and pass that tolerance on to their progeny. “Many studies have now demonstrated the existence of such ‘stress memory,’” says Jean-Sébastien Parent, a research scientist with Agriculture and Agri-Food Canada at the Ottawa Research and Development Centre.

Remove the stress, and the plant’s descendants can drop that particular stress-tolerance phenotype; that’s because the epigenetic change isn’t a permanent change to the plant’s DNA, Parent says. But this kind of stress-tolerance might be increasingly valuable as climate change rapidly alters environments and negatively impacts crop production.

Parent is co-author, with master’s student Haley Turcotte, of a recent review paper in the journal Agronomy looking at whether epigenetics can be used to guide the production of better-adapted cultivars – or cultivars more tolerant to climate fluctuations.

Parent likes to use the analogy of a cookbook to describe how epigenetics works. “If the genome is your cookbook and a gene is your recipe, then you could imagine that if it was your mother’s cookbook, she could have left some helpful notes in the margins about cooking a particular meal – all of her little tricks to make it better that you’d find useful,” he says. “Epigenetics is a kind of information on top of the more basic information, which is the coding sequences that would be the recipes in that analogy.”

Genomes are “a massive affair,” Parent says, but only a small part of genomes are coding for genes, which means they’re transcribed into RNA. “Obviously, the cell itself doesn’t want to make all the genomes into RNA; it wants to focus on those key parts of the genome, the genes themselves. Epigenetics in that way is helpful for finding which part of the genome should be activated and which should be silent. That is my explanation of the core function of epigenetics.”

Can epigenetic changes “stick?”
Parent says epigenetic changes have been studied in a variety of model organisms, including Arabidopsis thaliana. On a genomic scale, it’s “unmistakable” that modifications can be made in a plant during its lifetime, and some of these get passed on. “It’s not anecdotal,” he says.

“Epigenetic variations are much more common than mutagenic variations, or variations in the DNA sequence, but they get passed on a lot less. Where it fits on the evolutionary timescale is sort of hard to say, but the main opinion out there is that it’s somewhat of an intermediary state between the DNA mutation, in that it occurs more frequently but isn’t passed on as frequently – so it’s a tool evolution uses, but how much is still an open question.”

Parent says there’s historically been limited interest in epigenetics in plant breeding programs because heritable traits that might be desirable to plant breeders could be lost after a few generations.

Some of these traits get “reset” during reproductive stages, he says. This acts as a kind of built-in protection for plants so they don’t accumulate all the changes they undergo in response to stress that might disappear over time. From an evolutionary perspective, it makes sense to Parent that epigenetics could be related to short-term survival of plants.

“To me it’s a very rational idea that it would be there to complement the DNA changes or mutations, in that it can be stimulated by the environment quickly, to provoke a change faster, and also if that change is not a good idea long-term it could also be reset,” he says.

Epi-markers in breeding
How could epigenetic markers, or “epi-markers,” be used in plant breeding? In the paper, Parent and Turcotte focus on the most widely studied epi-marker: DNA methylation, a natural, biological process in which methyl groups are added to the DNA molecule without changing the DNA sequence.

“If you don’t have genomic markers, there’s no way to map traits in certain regions of the genome,” Parent explains. “DNA methylation [behaves] like a genomic marker, in that [it] is very strongly bound to DNA. In chemistry we call it a covalent bond, which is as good a bond as any – it’s very stable, which makes it easy to detect. In many ways, it would behave exactly like a genetic marker – the only difference is that you could have epigenetic markers where you have no genomic markers.”

Epi-markers could be used to help map portions of genomes where genomic markers are absent. But these markers could also be closely associated with the environmental conditions of the plants being studied, triggered by particular cues.

“There’s a real possibility that we could develop environmental stress markers that would target epigenetic modifications, and that could be useful in assessing how much of your field has undergone stress, and that could instruct how to take care of your plants and how to boost yields,” he says.

But that’s just one of many ways that epigenetics could be used to benefit agriculture. Parent notes another key way is in potentially improving plants that don’t – or can’t – undergo traditional breeding without compromising their marketability, such as pinot noir grapes or hops used in beer.

Parent says, “Epigenetics is tied to environments and environmental responses, and from my point of view it’s worth investing and trying to understand that relationship better and use it for helping plants to adapt to extreme weather.”