Gene editing, a type of genetic engineering in which DNA is added, “deleted,” or replaced in a target genome, is revolutionizing plant breeding across the world. In 2015, the CRISPR-Cas9 gene editing system was called “breakthrough of the year” by Science magazine. This spring, all of Canada’s prestigious Gairdner International Awards went to five scientists involved in developing CRISPR-Cas9 as a genome editing system for eukaryotic cells. 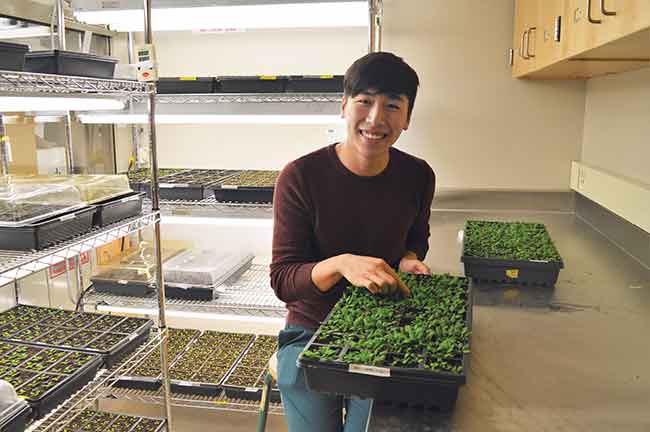 The CRISPR-Cas9 system allows scientists to target and mutate very specific pieces of DNA in any target organism and mutate one or more genes of interest. In plant breeding, the system can be used to “edit” genes and influence key traits quickly and with amazing precision – and because once DNA edits are successful, the foreign genetic material introduced during CRISPRing can be removed, plants developed using the system are not considered transgenic.

In short, CRISPR-Cas9 is a big deal, and it will have real-time implications for Canadian farmers in the very near future, especially if it enables breeders to bypass regulatory requirements reserved for transgenic varieties.

Hopping regulatory hurdles?
Earlier this year, a non-browning CRISPR-edited mushroom was allowed to entirely bypass regulation in the United States, owing to the fact that the U.S. Department of Agriculture did not find the edited mushroom to contain any foreign genetic material nor constitute a plant pest or weed.

Here in Canada, new products are evaluated based on the safety of the new trait rather than the method of development. The Canadian Food Inspection Agency (CFIA) assesses the environmental safety of all plants with novel traits (PNTs) prior to product release.

According to Cindy Pearson, national manager at the CFIA’s Plant Biosafety Office, a pre-market safety assessment is necessary for every novel trait, regardless of how it was developed.

Not all plants developed using CRISPR will lead to PNTs, Pearson points out, and plants that aren’t considered PNTs would not require pre-market assessment. In addition, every PNT application is different; the onus is on the breeder to provide a data package and compelling “story” of the product and its development. So regulatory processes for CRISPR-edited products are not set in stone.

CRISPR at work
Xin Li, a plant genetics professor at the University of British Columbia, is enthusiastic about the possibilities of CRISPR-Cas9 for plant breeding. Her student, Kevin Ao, has developed an efficient protocol to CRISPR tandemly duplicated genes in the model plant Arabidopsis. They are currently engaged in a project intending to clone an Arabidopsis gene responsible for blackleg resistance, find the homologous gene in canola and edit that gene using CRISPR-Cas9 to express blackleg resistance.

The project, which began in 2015 and is funded by the Natural Sciences and Engineering Research Council of Canada (NSERC), is a collaborative effort with University of Manitoba scientists Mark Belmonte and Dilantha Fernando. Li expects industry interest will lead to fruitful partnerships down the road.

“I think CRISPR-Cas9 will speed up plant breeding and create new dimensions,” she says. “With CRISPR you can improve quantitative traits – sometimes many at the same time – whereas with traditional breeding you focus on one trait at a time. Because you can target multiple genes at once, you have more flexibility.”

Li says CRISPR-Cas9 makes breeding for certain traits easier and faster than conventional breeding methods, but the end result is similar. For example, she says, if you want to breed a tastier tomato using mutagenesis, you have to look for the gene that causes sweetness then backcross lines to breed the new tomato. “With CRISPR-Cas9, you can look for the gene that contributes to making tomatoes sweeter, and you can edit that gene very specifically in an elite cultivar,” Li says.

Plant breeding using CRISPR is still in the early stages in Canada, and every plant requires a tailored protocol. But Li says breeders are very excited about its implications. “It’s a very useful technology that will soon revolutionize agriculture and medicine,” she says.

Proprietary gene editing
CRISPR-Cas9 isn’t the only new kid on the block in terms of gene editing. Cibus hopes to launch a new non-transgenic canola variety with tolerance to sulfonylurea herbicides, SU Canola, in Canada this year. The product has already received regulatory approval from CFIA and has launched in the United States.SU Canola was developed using Cibus’ proprietary gene-editing technology, the Rapid Trait Development System (RTDS), which enables site-specific edits of native genes with no introduction of foreign DNA.

In Canada, Cibus is moving forward with RTDS-edited glyphosate-tolerant flax, and has its sights set on wheat and even pulses.