For the first time, researchers are developing significant genomic resources for these forage crops. 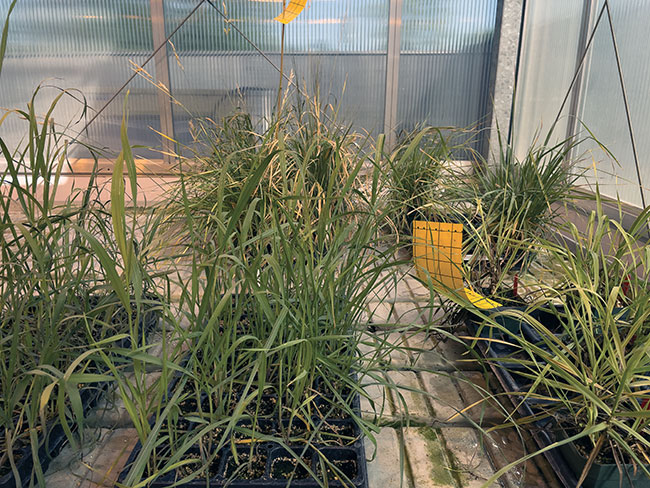 In many crops, genomic resources are powering greater advances in varietal improvement. However, development of such resources for bromegrass crop species has been hindered because these species have very large, very complex genomes.

Now, with the help of leading-edge DNA sequencing technologies, an ambitious project is underway to build an array of genomic resources for these important forage crops.

Sharpe, who is GIFS’s director of genomics and bioinformatics, is excited to be involved in this pioneering bromegrass work. “Not much has been done with the genomes of these crops so there is quite a lot to unravel and explore. There will be similarities to other grass genomes, but there will be some key differences as well. I’m keenly looking towards the results that we’ll be getting.”

“Overall, in the breeding for perennial grasses, very little molecular or genomic work has been done [because grass crop species have very large genomes]. Dr. Sharpe’s project is one of the first to tackle this,” notes Bill Biligetu, associate professor and forage breeder at USask’s Crop Development Centre (CDC).

Biligetu, who is collaborating on the project, is looking forward to the development of bromegrass genomic breeding tools, such as the reference genome and molecular markers, through this project.

A reference genome is the fully sequenced DNA of a representative example of a species, with all the many, many pieces of DNA in the genome assembled in the correct order. It provides a basis for comparison with the sequences of other individuals in the same species, making it much easier to assemble the genomes of those individuals. A reference genome can also be used in figuring out the locations of genes that influence traits of interest and for developing markers for those traits.

Biligetu explains that conventional breeding of bromegrass crop species can be a long process because these species are not only perennials with long breeding cycles but also outcrossing rather than self-fertilizing plants. So genomic tools for bromegrass crops would be a big advantage. 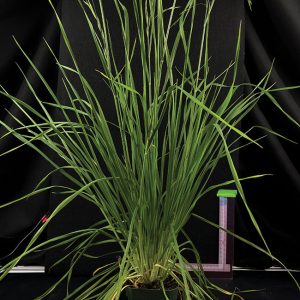 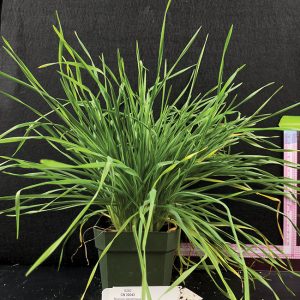 These are a few of the bromegrass species that Sharpe and Biligetu are working with in the project. Photos courtesy of Raju Chaudhary, GIFS. 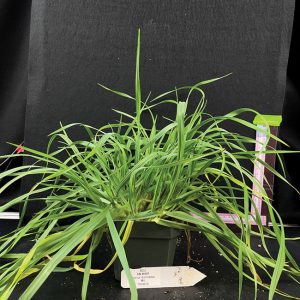 A further complication is that the genome copies in these bromegrass polyploids are not just duplicate copies. “There is a degree of autopolyploidy, meaning duplicates of the same genome are present. But there is also allopolyploidy, meaning slightly different Bromus genomes are there together.”

Ensuring that all the DNA pieces are assembled in the right order for the two crop species is very challenging. Fortunately, a few factors are helping to make the formidable goal of creating a reference genome for these crops much more feasible.

One factor is that Sharpe has identified a wild bromegrass species with a diploid genome among the diverse Bromus germplasm accessions (seed samples) that he and Biligetu have obtained from different gene banks. And it turns out that this diploid is a good representative genome for the genome copies in the meadow and smooth bromegrass crop species.

According to Sharpe, it is really helpful to create a high-quality reference genome for just one of the genomes in a polyploid, as a starting point for assembling the polyploid’s complete genome. So, the wild diploid’s reference genome will make a solid foundation for further work on the much more complex crop genomes.

The two other key factors are the huge drop in sequencing costs in recent years and major advances in sequencing technologies. In particular, GIFS’ state-of-the-art Omics and Precision Agriculture Laboratory (OPAL) that supports services in DNA sequencing and genotyping has a new piece of technology called the PacBio Sequel IIe.

If you think of the sequence of a genome as an enormous jigsaw puzzle that you need to assemble, then sequencing technologies that provide “long reads” of the DNA will give you bigger adjoining pieces of the puzzle. Sharpe explains that PacBio gives very long reads, and those very long reads are very high quality. That makes it much easier to put all the different pieces of DNA together in their proper places.

He says, “This new technology is very valuable for ensuring we’ve got robust genome assemblies.”

Sharpe hopes to complete the high-quality reference genome for the diploid this fall. “Once we have that, we intend to generate [genomic] data from the smooth and meadow bromegrass cultivated species. Then we can use the reference genome to help us piece things together at that higher level of ploidy and get a very good representation of the genome complexities for the two cultivated species.”

Tapping into Bromus diversity
This reference genome work is an important component in developing tools to allow breeders to tap into the genetic diversity available in the Bromus family to improve their bromegrass crop lines.

As a step towards making use of this diversity, the researchers are characterizing all their Bromus accessions, including different lines of meadow, smooth and hybrid bromegrass crop varieties, as well as landraces (locally adapted, traditional varieties), and wild species.

One part of characterizing the accessions is to phenotype them. Sharpe’s group and Biligetu’s group worked together to grow the seeds into plants in the greenhouse. They recently transplanted the lines to the field, and now Biligetu’s group is measuring a wide assortment of traits in the different lines.

“What we expect to see is a range of different phenotypes, some that are very different from the cultivated species. But what we hope to see is some lines that have particular traits that could be really advantageous if they are brought into a cultivated line,” Sharpe explains. “For example, if a wild species has an advantage with respect to biomass development, we could look to see if we could bring in, or introgress, that particular trait into the cultivated bromegrass germplasm through the breeding program. So, this work is a way of identifying new, useful variation on a phenotypic level.”

As well, Sharpe’s group is genotyping the accessions – sequencing their DNA to characterize their genetic makeup. In addition, the researchers are doublechecking the genetic composition of the accessions using more traditional methods, such as looking at the samples under a microscope to confirm chromosome numbers and ploidy levels.

Once the researchers have collected the phenotype and genotype data, they will analyze the data to start figuring out where the genes influencing key traits are located and start developing markers for those genes.

They also plan to identify a core set of breeding materials with key advantageous traits that breeders could use for cross-breeding and introgression to bring those traits into their bromegrass breeding lines. 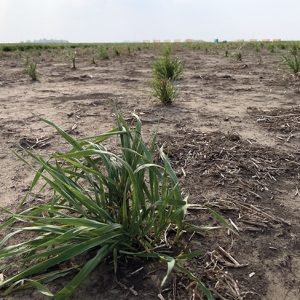 After growing the diverse bromegrass species and lines in the greenhouse, they recently transplanted the lines to the field to evaluate their traits. Photo courtesy of Raju Chaudhary, GIFS. 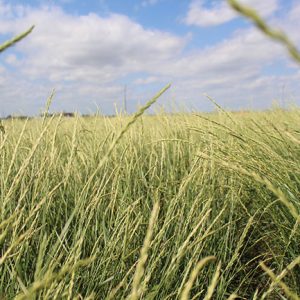 A century of forage breeding
The outcomes of this project have the potential to significantly advance Biligetu’s bromegrass breeding work, which is a part of his overall forage breeding program.

This year, his program is celebrating 100 years of developing better forage varieties for cattle producers and forage seed growers. The program started in 1922 at USask. Then it moved to the Agriculture and Agri-Food Canada (AAFC) research centre at Saskatoon. And in 2005, it returned to USask. “This program today is a product of many people before me,” he notes.

Guided by industry needs, this diverse program includes both grasses and legumes.

These days, the program’s bromegrass breeding work is focusing on meadow and hybrid brome. A key breeding objective for meadow brome is to improve fall regrowth so cattle producers can increase their use of meadow brome for fall grazing and reduce the feeding period in the winter.

The hybrid brome objectives include increased forage yields and better regrowth. As well, Biligetu is working with Greg Penner, a USask professor of ruminant nutritional physiology, to improve fibre digestibility in hybrid brome.

The program’s most recent bromegrass variety is CDC Torsion, a meadow brome released in 2020. “CDC Torsion has a genetic background of Fleet meadow brome, but CDC Torsion is taller than Fleet, so it has a higher biomass. Its regrowth is also good. And it produces a higher seed yield than Fleet, which is important [for commercialization of varieties].”

Wheatgrass breeding is another focus for the program. “We just released a new salt-tolerant hybrid wheatgrass variety this year, and it has been quite well accepted by the industry,” notes Biligetu.

This yet-to-be-named variety is a hybrid of bluebunch wheatgrass (a native grass of North America) and quackgrass (an introduced species). It is similar to AC Saltlander (a green wheatgrass) in terms of salt tolerance, plus it has a higher seed yield and less creeping than AC Saltlander.

Alfalfa is a top priority for Biligetu’s program. “We are emphasizing local adaptation and winter hardiness in salt-tolerant alfalfa. There are some of the salt-tolerant varieties from the U.S., but in most cases, they are not winter hardy in Canada.”

His group is also developing better varieties of two bloat-free legumes. They are working to enhance sainfoin’s forage yield and winter hardiness. And recently, they have been collaborating with AAFC on cicer milkvetch, targeting improvements in late-season forage yield and quality for stockpiling purposes. 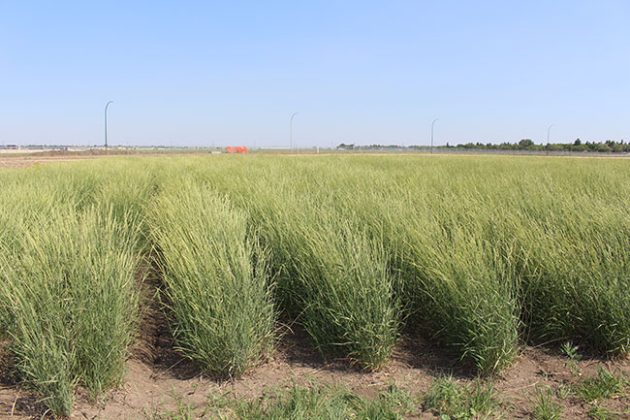 A springboard for advances
Looking ahead, the bromegrass project’s results – and the results of other forage genomic studies by Sharpe and Biligetu – hold a lot of promise for accelerating varietal improvements.

“The results from this bromegrass project will serve as a foundation for future breeding work. By using genomic resources, we can potentially make bigger genetic gains than with conventional breeding methods,” Biligetu says.

In particular, he hopes the genomic resources coming out of this project will lead to the use of genomic selection in bromegrass breeding.

In contrast, genomic selection involves using genetic markers for the whole genome along with statistical analysis to predict the breeding value of a line. Genomic selection can be used to select for traits influenced by many different genes, like forage yield and stress tolerance.

Both Biligetu and Sharpe are excited about the possibility to really boost improvements in such complex traits.

“We have two other forage [genomics] projects, one in alfalfa and one in hybrid wheatgrass, just recently funded by ADF. The key elements in those projects are drought and salinity tolerance. Now we’re thinking that these are probably two signal traits for bromegrass as well,” Sharpe says.

“We have some resources available to screen for variation in those two traits and also do some high-resolution digital phenotyping on those traits. So, we’re looking to generate that data in all the forage crops we’re working on.”

With such studies underway, the next century of forage breeding at Saskatoon could see some truly remarkable improvements in Canadian forage varieties.