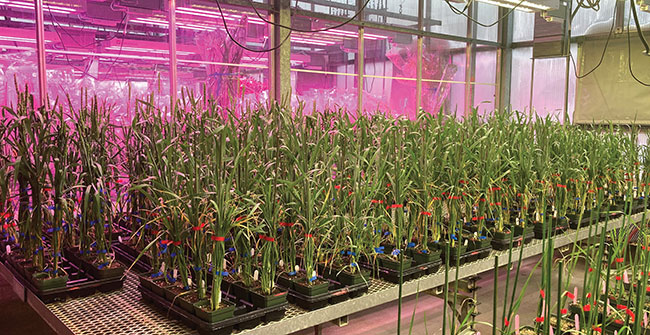 Researchers are investigating a broad-spectrum plant defense approach as an alternative option for important crop diseases in Western Canada, where genetic plant resistance is lacking or chemical treatments are not sufficient. They are interested in determining whether natural defense priming agents may offer an alternative approach and/or work in combination with current strategies to fight against Fusarium head blight (FHB) in wheat and other diseases such as Ascochyta blight of chickpea and Aphanomyces root rot of pea and lentil.

“We are using a different approach to fight against crop diseases such as FHB by priming plant defense responses using natural chemical agents,” explains Hossein Borhan, a research scientist at Agriculture and Agri-Food Canada (AAFC) in Saskatoon. “Although not a new area of research, priming plant defenses is gaining interest for various crop diseases. Application of priming agents induces plant defenses only after plant perception of a pathogen. This is an advantage because instead of the plant’s defenses being constantly on (constitutive defense induction), the plant’s defense systems remain at the basal level and are only activated when pathogens are present. Consequently, defense priming is less costly to the plant development and yield, compared to a situation when plant defenses are induced constantly.”

An example of natural chemicals that prime plant defenses are ascarosides produced by plant-parasitic nematodes. Research teams led by professors Daniel Klessig and Frank Schroeder at the Boyce Thompson Institute of Cornell University have discovered that an ascaroside named ascr#18 provides protection against fungal, bacterial and viral diseases of several major corps such as maize, rice, wheat, and soybean. Borhan’s lab at AAFC, in collaboration with these two research teams, are assessing whether application of ascr#18 can protect wheat against FHB and if so, what is the optimal concentration and the best application method. “We were interested to see if we could expand the use of the priming agent ascr#18 to FHB, which is a serious disease in Western Canada with no robust resistance and limited fungicide control,” Borhan says.

The experiments so far have been conducted under greenhouse conditions, with plans to move to field trials in 2022 after some delays due to Covid-19. “For the greenhouse studies, we are using susceptible wheat varieties and high pathogen inoculum pressure under optimal conditions,” Borhan explains. “We applied various concentrations of ascr#18 and have identified one that seems to be optimal at this stage. Our results showed that foliar application of ascr#18 at a very low concentration (one micro molar) provided moderate protection against FHB; interestingly, higher concentrations did not enhance the wheat defense. We also compared other application methods, such as seed soaking and seed dressing with or with subsequent foliar application.” 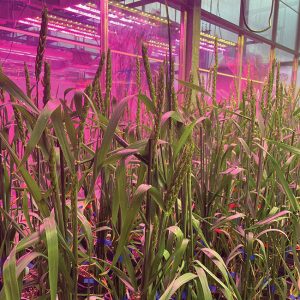 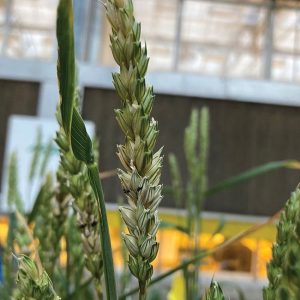 The preliminary results are promising and show that an application of ascr#18 slows down the pathogen. The most successful application method was foliar, which were made at the wheat head emergence stage and prior to inoculation. The results so far show that ascr#18 is promising as a foliar control of FHB since it suppresses the disease, especially at the earlier stage. Unfortunately, the seed treatments did not seem to be as effective against FHB, but Borhan would like to continue to explore this option further as it would be a very practical approach.

“Under the greenhouse experimental conditions in our project, ascr#18 does provide some level of protection, but does not appear to be sufficient on its own. However, it is worth mentioning that disease pressure was higher in greenhouse pathology tests,” Borhan adds. “Therefore, it is possible that ascr#18 would perform better under the field conditions where there is lower pathogen pressure. We also want to determine the effect of wheat genotype and the efficacy of ascr#18 in combination with fungicides to see if it could enhance protection against FHB. We are also testing some other chemical compounds to see how other defense inducing or priming agents compare to ascr#18 and how they might work in combination.”

In another collaboration with AAFC scientist Michelle Hubbard in Swift Current, Borhan is experimenting with using ascr#18 in pea, and eventually lentils, to determine if it provides protection against Aphanomyces root rot. Work by Klessig together with professor Aardra Kachroo’s group at the University of Kentucky has shown that ascr#18 provides strong protection against root and stem rot disease of soybean caused by Phytophthora sojae.

“Our research results so far are promising and we hope to eventually utilize ascr#18 as another tool, alone or in combination with other methods, for FHB control in wheat,” Borhan says. “As a potential foliar application, ascr#18 could likely be applied in the field similar to a fungicide application. With our field trials planned for spring 2022, we expect to be able to answer more of these questions. We look forward to expanding the potential use of ascr#18 for managing FHB in durum wheat crops, and against other diseases such as Aphanomyces root rot in pulse crops.”