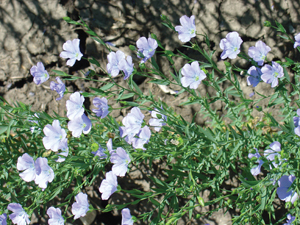 If growers want to get serious about controlling cereal disease, they should
do some careful pre-planning, says David Kaminski, plant pathologist with Manitoba
Agriculture, Food and Rural Initiatives at Carman. "Many management strategies
are basic preventative measures, and although that may sound trivial, they are
an important part of the bigger picture," Kaminski says. "Disease
management is a segment of the total crop package. We have to work with disease
management in combination with clean seed, seed treatment, resistant varieties,
proper fertility and crop rotations."

Accurate and educated field scouting is a foundation of disease control, as
well as weed control and overall crop health. In a nutshell, the purpose of
field scouting is to identify the disease level at a very early vegetative growth
stage. "Be sure to scout early, so if you need a fungicide application
you can make it at the appropriate stage," says Kaminski. "The window
of application for certain diseases and some fungicides is narrow, so the timeliness
of scouting can be critical."

Growers should not be fooled into complacency if they do not see disease on
their first trip into the field. Diseases can develop fast. Sometimes the infection
may have set in, but the symptoms are not yet observable, similar to humans
with a common cold.

Disease symptoms tend to be most intense around the base of the plant. "You
may not see any symptoms on the upper leaves, but with every disease there is
a latent period of infection," he says. "Generally, what you see with
residue-borne diseases such as tan spot or septoria complex, is the disease
moving up from the lower part of the canopy."

Timing, as the story goes, is everything. Once a grower decides that a fungicide
application is in order, the timing of the application can make or break the
success of the application. "A treatment closer to flowering may be more
appropriate for the foliar diseases if they haven't appeared earlier in the
crop," he says.

Disease and timing
Growers need to consider the kind of disease they are dealing with. Cereal diseases
that appear above ground can be divided into three major categories.

"The first category are those diseases we see year after year," explains
Kaminski. "Tan spot and the septoria complex are two of the most prevalent
diseases in wheat. One of the newer diseases in barley is spot blotch, which
is a leaf manifestation of the same organism that causes common root rot. We've
seen more of this disease over the past few years so we're watching it closely."

Tan spot and septoria complex often co-exist in a crop. Tan spot is a cool-
season disease that appears early in the crop. Septoria thrives in warmer conditions
and often appears towards the end of the season.

"These are stubble-borne diseases that make crop rotation more important
than for other diseases," says Kaminski. "If you are on a tight crop
rotation where the same cereal appears in the rotation frequently, you can expect
to see more of these diseases."

The second category of cereal disease is rust, which may or may not make an
appearance depending on the year. Says Kaminski: "Although a lot of plant
breeding work has been done to protect against rust, there are still some vulnerabilities
particularly with leaf rust in wheat."

Rusts do not overwinter. Rust inoculum arrives annually on southerly winds
from the US. The earlier they arrive, the bigger the problem they cause. Kaminski
says: "Parts of Manitoba deal with rusts – leaf, crown, stripe and
stem rust – every year. However, in 2004 we saw more rusts in the southwestern
part of the province as compared to the Red River valley, which is a reversal
from other years. I believe it has to do with the air currents plus the amount
of humidity during specific periods."

Cereal diseases that vary with the environment fall into the third category.
In this category, the big problem is fusarium head blight caused by the fungus
Fusarium graminearum which produces mycotoxins. "Fusarium infection
happens with the coincidence of heat and humidity at flowering, which usually
makes Manitoba a pressure cooker for head blight infection," explains Kaminski.

Early I.D.
The earlier the disease is identified, the better the chances for effective
control. "When we choose a fungicide, we're basically trying to protect
the flag leaf from infection," explains Kaminski. "Up to 50 percent
of the final yield of a wheat crop depends on the health of the flag leaf. Ensuring
the flag leaf is not infected or has a minimal level of infection is essential
to maximizing returns in cereal crop production."

The flag leaf is the youngest leaf at the top of the plant. It receives more
sunlight than other leaves and is more efficient in producing the photosynthetic
nutrients or carbohydrates needed to fill the kernels. Cereal disease infection
reduce the flow of carbohydrates to the head, resulting in smaller, thinner
kernels that lower yield, quality and possibly grade.

Fungicide needed?
Once disease is identified, the crop stage and window for application, as well
as the projected economic return, can help determine the need for a fungicide
application. Many growers who face fusarium head blight often take advantage
of risk forecasting to help them identify the risk of infection throughout heading
and flowering.

Folicur, used for protection against fusarium head blight, has been available
for about six years. "Growers are becoming familiar with how much of an
impact Folicur can make on leaf diseases and the significant reduction of infections,"
says Kaminski.

Folicur can be applied a little later at early flowering, which protects against
head blight and other diseases such as later-occurring rusts. "When there
is early season appearance of leaf disease symptoms only, growers often look
to products that have registrations that allow for earlier use." For leaf
diseases, growers may also consider Bravo, Dithane, Stratego or Tilt fungicides.

In 2004, winter wheat in some areas experienced a problem called 'physiological
leaf spot'. "Although it looks a lot like a leaf disease caused by a fungus
or bacterium, it's not," explains Kaminski. "It's simply a deficiency
of the micronutrient chloride, which can easily be solved by applying appropriate
amounts of potash at seeding."

Kaminski says this is another example of why proper disease identification
is critical. "It's necessary to know whether you are dealing with a pathogenic
disease that can be controlled by a fungicide or a physiological disease where
fungicides would essentially have no effect." Winter wheat and some durum
varieties appear to be the most susceptible to physiological leaf spot. -30-