Helping plants to help themselves in fighting tough diseases. 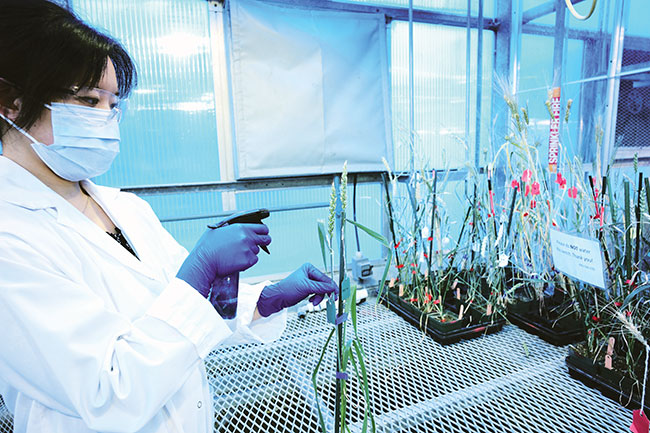 Prairie research is underway to see if a natural compound released by a plant parasite could help boost wheat’s defences against Fusarium head blight.

“This approach is about applying certain biological or chemical agents to a plant to induce the plant’s defences by triggering the expression of its defence genes,” explains Hossein Borhan, a research scientist with Agriculture and Agri-Food Canada (AAFC) in Saskatoon, who is leading the project.

“These agents are molecules or compounds that are perceived by the plant as ‘not-self.’ Basically, they mimic the exposure of the plant to the pathogen without the actual presence of the pathogen. So, the plant responds to these molecules, which are naturally associated with pathogens, and activates its defence system.”

Priming a plant’s defences immunizes the plant before an actual pathogen attack.

“But when a priming agent is applied, we induce the plant’s defences in the absence of the virulence factors. That gives the plant time to build up its defences and to overcome the subsequent pathogen invasion.”

The compounds that researchers are considering as possible priming agents are ones that activate systemic defence responses that are effective against a range of pathogens. So, rather than just defending itself against a single pathogen species or race attacking at a specific infection site – which is what race-specific disease resistance genes do – the whole plant is alerted to defend itself against diverse pathogen species.

Borhan thinks this priming approach could be an additional disease management option, especially when conventional methods, like disease resistance genes or fungicides, are not available or don’t provide complete protection against a pathogen.

“Using crop varieties with resistance genes can be very effective, but often the resistance is only effective against specific races of a pathogen. Also, the resistance can break down in a rather short period because the pathogen evolves,” he explains. “Using fungicides to control pathogens can be problematic, primarily because of the risk to human health and the environment, and also because repeated application of fungicides will lead to the emergence of fungicide-resistant races of pathogens.” 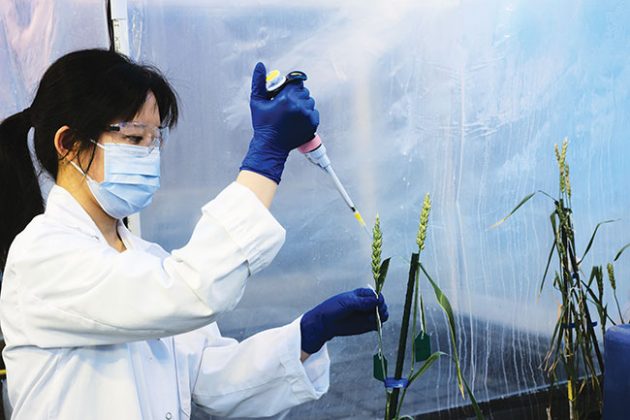 Cheung inoculates wheat heads with Fusarium graminearum in experiments to see if ascr18 helps the plants to fight this pathogen. Photo courtesy of Colin Kindrachuk.

From concept to practical tool
“Priming plant defences is not a new area of research, but it has definitely gained a lot of momentum in recent years,” Borhan notes. “The reason is that there have been significant advances in our understanding of how plants interact and respond to pathogens and to beneficial microbes. So, priming plant defences has now become more of a real alternative/complementary option to conventional methods of plant protection against pathogens.”

As researchers turn this concept into practical products for crop growers, they will need to find answers to a wide range of questions, including many practical questions.

Borhan gives a few examples: “One research area is how to maximize the efficiency of priming agents and at the same time reduce any costs to the plant’s overall fitness. Induction of plant defence responses may impact the plant’s general development and yield by using up some of the energy and nutrients that the plant requires to fully develop.

“In terms of applying the priming agents to crops, we need to find out about the stability of the agents. This is less of an issue when they are used in controlled environments such as greenhouses, but we need to understand the effect of the environment on the stability and functioning of these agents. We also need to figure out cost-effective ways to apply the agents, especially under large-scale Canadian farming practices.

“Another consideration is the formulation and production of large quantities of the agents for commercial use.”

Help from a plant parasite
According to Borhan, various compounds have been shown to be effective as priming agents. His project is making use of a compound released by plant-parasitic nematodes, which are microscopic, worm-like pests.

“Nematodes produce pheromones called ascarosides, which play a role in regulating nematode development and in communication and interaction between nematodes. Recently, researchers have discovered that ascarosides can act as a plant defence priming/inducing agent,” he explains.

“Since first reported in 2015, additional studies have shown that an ascaroside called ascr18 is effective as a priming agent in several crops like wheat, soybean, tomato and corn. And it is effective against a range of pathogens like viruses, fungi, bacteria, nematodes and oomycetes (which are fungi-like organisms). These initial findings warrant further research toward the application of ascr18 to boost the defence of Canadian crops against their major pathogens.”

Borhan’s project is currently investigating the use of ascr18 as a priming agent to help wheat plants defend themselves against Fusarium head blight. He will also be testing ascr18 to help pulse crops fight important diseases.

“Fusarium head blight is a serious concern for Canadian crop growers, and one of the most challenging diseases to control. Neither disease resistance genes nor fungicides are completely effective against this disease. So, I wondered whether priming a wheat plant’s defences could be a solution to this challenging disease,” he says.

“Based on published data and discussion with the team who discovered ascr18 at the Boyce Thompson Institute in the U.S., I was curious to test ascr18 as a priming agent that could potentially help to minimize the damage due to Fusarium head blight.”

Borhan and his research group are just in the first year of this project, which is funded by Saskatchewan’s Agriculture Development Fund, the Western Grains Research Foundation and the Saskatchewan Wheat Development Commission

At the moment, they are working on the dosage of ascr18 and evaluating foliar, seed and in-furrow application methods.

“Priming plant defences has seen many advances and promising results in the last few years. I think it has the potential to be a viable alternative approach to managing crop diseases,” Borhan says. “I’m hoping to play a small part in this exciting and important research area.”