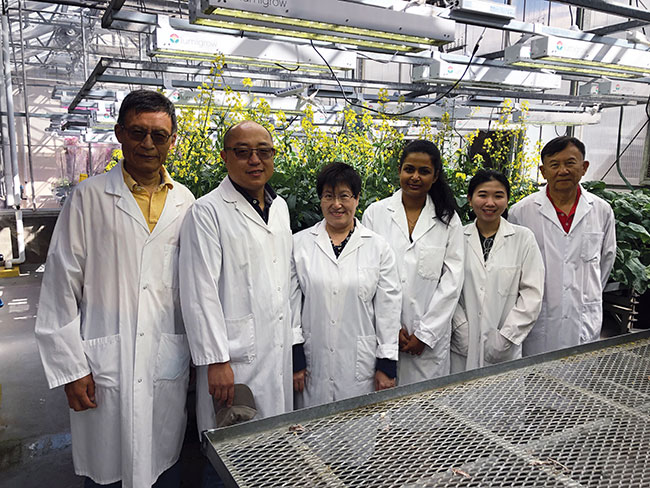 If successful, this research could help accelerate canola breeding not only for clubroot resistance but also for a myriad of other desirable traits.

Key collaborators in this research include senior research scientist Dr. Gary Peng at the Saskatoon research centre of Agriculture and Agri-Food Canada (AAFC) and Dr. Lipu Wang, research officer with USask’s Crop Development Centre. The first phase of this research, from 2019 to 2022, was funded by Saskatchewan’s Agriculture Development Fund and the Saskatchewan Canola Development Commission (SaskCanola). And now SaskCanola and the Western Grains Research Foundation are providing funding from 2022 to 2025 to take the research further along.

Xiao is a professor in USask’s College of Medicine. His research interests include the molecular mechanisms of DNA repair and mutagenesis, which is why he works with gene editing tools like
CRISPR.

He explains that CRISPR is the latest in several generations of editing tools for modifying DNA sequences. From his perspective, the discovery of CRISPR, which received a Nobel prize in 2020, has ushered in a new era in gene editing.

“CRISPR is a powerful tool. We have been waiting for this kind of technology for many years,” he says. CRISPR is more accurate, faster, simpler and cheaper than earlier gene editing methods. It can be used to add, delete or replace DNA sequences, and it can be used to turn a gene on or off.

Potential advantages for canola
CRISPR could be especially useful to canola breeders for a couple of reasons.

One is that the canola species, Brassica napus, is relatively new, thought to have originated about 7,500 years ago. Consequently, Brassica napus germplasm has only limited genetic diversity. And that reduces the potential for improvements that can be made through cross-breeding between different canola lines.

For example, Brassica napus has very limited sources of clubroot resistance. Although breeders can, for instance, move clubroot resistance genes from other Brassica species into canola using conventional breeding methods like introgression, or even marker-assisted selection, that can be time consuming to get rid of all the undesirable linkage drags. CRISPR gene editing could be a quicker, easier way to improve resistance.

The other reason has to do with the structure of the Brassica napus genome. “The genome structure of canola is called an amphidiploid, so it is a combination of two ancestor plants [and has two complete genomes, one from each ancestor]. That means there are duplications of genes throughout the genome,” explains Doug Heath, SaskCanola’s research manager.

“Let’s say you have four copies of a gene on the various copies of the chromosomes, [and you want to knockout that gene to improve a trait]. If you use a transgenic approach, you might only knockout one or two of them. But then the remaining copies could mask the changes that you’ve made, so you wouldn’t see any difference in the plant’s performance. By using [CRISPR], you could edit all the different copies of the gene at the same time potentially.”

Heath adds, “Gene-edited plants are potentially not going to be considered GMOs. So, canola breeders who make use of the results from this research to edit their own elite breeding lines could get this clubroot resistance trait to market faster.”

From Arabidopsis to canola
For Xiao, this canola research is sort of a return to his early academic roots in botany. In fact, he worked on canola for his Master’s degree nearly 40 years ago. “However, over the years, I shifted to microbiology and then to health science work on health-related projects. Then about 18 years ago, we began to pay attention to plant research, but on a basic research level.”

His research group has been using Arabidopsis as a model plant in this basic research. This plant has a small, simple genome, which is handy for genomic studies. It is a diploid, meaning that its genome has two sets of chromosomes.

Xiao’s group has been working with a wide range of Arabidopsis genes, but an accidental advance through their mutation studies focused their attention on clubroot resistance.

“Arabidopsis and canola both belong to the Brassicaceae family [so their genomes have many similar genes]. Arabidopsis actually is a good model for the clubroot infection; it can be infected by the clubroot pathogen and develop clubbed roots,” he notes.

“Dr. Rui Wen, one of my PhD graduates, is now with Gary Peng’s research group at AAFC where they are working on canola diseases including clubroot. She suggested testing to see if the genes of our mutants that we created showed a phenotype with clubroot infection. It turned out that we had some very interesting resistant phenotypes.”

In particular, one of their mutations seems to make the plant resistant to clubroot no matter which pathotype is attacking.

That discovery has spurred their basic research in a very practical direction.

Race-independent resistance
Clubroot is caused by a soil-borne pathogen called Plasmodiophora brassicae. Infection produces irregular swellings on the plant roots that hinder the movement of water and nutrients into the plant’s above-ground parts. The disease can cause devastating yield losses in susceptible canola cultivars in heavily infested fields.

“The current clubroot-resistant canola varieties have race-specific resistance; no single resistance gene identified can be effective against all pathotypes found on the Prairies. Our idea is to develop race-independent resistance,” Xiao says.

He outlines the concept: “We know that, for pathogens to infect their host, they often utilize host factors to cause the infection. [For instance, a pathogen might use one of the host plant’s receptors as an entry point for infection.] If we know what host factor is required for the clubroot pathogen’s infection, then we can inactivate that host factor at the gene level. And then the pathogen will not be able to infect.”

He adds, “This concept has not been developed in canola against clubroot. But there are a few examples of such success stories in other crops where researchers have inactivated the host factor to prevent infection.”

Race-independent resistance would be a real advantage for canola breeders and growers. “Let’s say your canola variety has resistance to a couple of pathotypes of clubroot. But in the soil, there could be dozens of different pathotypes,” Heath notes. “Having a more general way of defending against all of the pathotypes will prevent the infection.”

The novel gene variant that Xiao’s group has created is an inactivated form of a gene that, when activated, plays a role in responding to growth hormones. Xiao says, “The general idea is that the pathogen has to utilize the host’s growth hormones to grow the roots into those club-like shapes. If this gene is inactivated, then the plant would not develop clubroot.”

Promising progress, upcoming steps
Xiao’s group has made good progress during the 2019-22 phase of the research. For example, they have been able to target their gene of interest and inactivate it in Arabidopsis. Their CRISPR-edited
Arabidopsis plants showed resistance to clubroot, and yet the plants still grew properly.

Xiao’s and Peng’s groups are collaborating to assess whether the edited Arabidopsis plants have truly race-independent resistance. The researchers have tested three pathotypes so far, and the plants have resistance to all three, which is very encouraging.

They expect to complete the pathotype testing very soon. Then they are planning to submit a scientific paper for peer review, and they will probably file a patent for their novel variant.

Xiao’s group has also done some initial work using CRISPR to edit the target gene in canola. They are now working to optimize CRISPR for efficient, high-throughput editing of canola that would allow breeders to accurately target many genes simultaneously.

Xiao explains that, with CRISPR, there is no standard, single technique where everything works perfectly for every type of tissue. “So, we are assessing different means of transformation, using different promoters and different constructs to see which [protocols] will give us the best results for gene editing in canola.”

As you can probably guess, editing canola is more complex than editing Arabidopsis. “Arabidopsis has only two copies of the gene that we are targeting. It turns out that canola has 12 such genes in its genome, so it is way more complicated than we thought,” he says. “However, we found that we can classify those 12 genes into two groups based on their coding sequences, and each group has six genes.”

Xiao’s group is currently targeting one group of the genes. Since canola’s genome is composed of two diploid genomes, it has two copies of each of those six genes. So the researchers actually have a total of 12 copies to work with in that group. They have designed a CRISPR/Cas9 transformation vector to target that whole group of 12 at the same time.

“[In our first round of gene targeting,] the efficiency turned out to be very impressive. The best we got was nine out of the 12 copies edited by one round of transformation,” he says. So, this work is also off to a good start.

Xiao’s and Peng’s groups are evaluating these edited canola plants for clubroot resistance. The initial results in these tests also look encouraging, as the roots of some of the edited canola lines are free of clubroot symptoms.

“We have to be careful because we cannot completely inactivate that whole family of genes,” Xiao notes. “We have to strike a balance to make sure the plants will still grow well and yield well, but show resistance to clubroot infection.”

So, along with the clubroot pathotype testing, they will be evaluating the edited lines in terms of plant growth and grain yield.

As well, Xiao’s group will need to assess their CRISPR protocols in other canola varieties. “In our canola experiments so far, we have been using one of the most accepted standard varieties. Eventually we also want to make sure we have something that will work for elite canola varieties used by growers. That means we will need to collaborate with breeding companies, and there has some interest already.”

Xiao’s group will be editing these other candidate genes and checking to see which of the edited variants give the best outcomes for clubroot resistance without compromising canola yield and quality. These studies to explore the effects of different gene variants could also increase understanding of the mechanisms involved in clubroot resistance/susceptibility. And that could further advance efforts to improve resistance to this disease.

Overall, this research has the potential to provide an optimized CRISPR/Cas9 tool for faster, more accurate canola breeding, to enhance clubroot resistance in canola, and to open the door to improvements in many other traits important to canola growers.