A three-year, eight-site study found no significant difference in yield or protein. 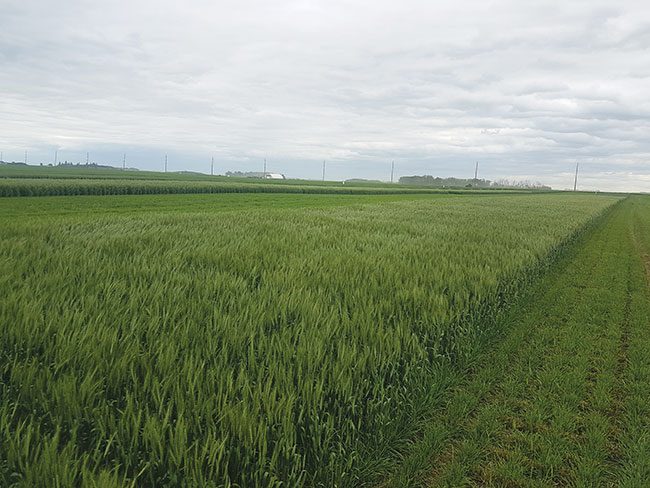 In a three-year comparison of Certified and farm-saved seed, no significant differences were seen in yield and protein content of wheat.

Farm-saved seed is a common practice for wheat growers on the Prairies to cut costs, but there wasn’t a lot of independent research on how farm-saved seed performs compared to Certified seed. Research completed in 2021 looked at the differences.

“In 2018, Sask Wheat asked the Agri-Arm group if we could devise a study to compare Certified seed against farm-saved seed,” says Mike Hall, research coordinator with the East Central Research Foundation and Parkland College in Yorkton, Sask. “Sask Wheat wanted to know if this is the best practice or if farmers should introduce Certified seed more often.”

Historically, the majority of wheat acres in Western Canada are seeded with farm-saved seed. Producers will introduce better genetics to the farm by purchasing Certified seed, and then using farm-saved seed for a couple years afterwards.

Hall and Heather Sorestad, research assistant with ECRF and Parkland College led the Sask Wheat-funded project that included all eight Agri-Arm sites in Saskatchewan, spread throughout the Brown, Dark Brown, Black and Grey soil zones. The recent trend is for farmers to grow farm-saved seed for one to three years on average, before buying Certified seed, Hall says. The Agri-Arm study had two objectives. The first was to compare the vigour and yield performance of various lots of farm-saved wheat seed relative to the same varieties of Certified seed. The second was to determine the degree to which seed treatment can improve the vigour and yield potential of farm-saved and Certified seed lots of wheat. “Maybe we have a poor seed lot that performs poorly against Certified seed when untreated, but performs relatively better when treated,” Hall says.

At each Agri-Arm site there were three varietal comparisons, with the variety(s) chosen depending on local preference. Within each varietal comparison, Certified and farm-saved seed lots were compared, each seed was from different seed lots, and a seed lot was only used once at each site. At the end of the study, with eight sites, six seed lots per site, and three years of research, there were 144 different comparisons – one-half Certified and the other farm-saved.

The vast majority of the 72 varieties used in the study were hard red spring varieties. The most common variety was AAC Brandon used in 27 comparisons, followed by AAC Viewfield (8), AAC Elie (7), and Cardale, AAC Cameron, CDC Landmark, CDC Plentiful, Redberry, Steller, Faller, and AC Connery. Swift Current used durum in each year of the study, growing AC Transcend, AAC Spitfire, and CDC Fortitude. CS Accelerate, a Canada Prairie Spring wheat variety, was compared at Indian Head in one treatment in 2021.

After the farm-saved seed lots were selected, samples were sent away for quality testing to provide a picture of the seed quality. Germination, seed vigour and seed borne disease levels were determined. The seed tests found no significant difference in germination between farm-saved seed and Certified seed, both at around 92 to 93 per cent. Similarly, there was no significant difference in total seed-born Fusarium, and disease levels were low.

Each seed lot was split and either seed-treated or left untreated. The seed treatment used varied between sites based on availability and local preference. These included Raxil Pro, Cruiser Vibrance Quattro, Cruiser Max Cereal and Cruiser Max Vibrance.

For grain protein, three site years had significant differences, with farm-saved seed having higher protein at two sites, Indian Head and Scott in 2020, and Certified seed higher at Outlook in 2019. In total, eight comparisons had higher protein with Certified seed, and 8 comparisons had higher protein for farm-saved seed. But overall, there was no significant difference in grain protein across all site-years. The protein levels were virtually identical at around 13.8 per cent.

“The results suggest that most farmers will not suffer a wheat yield or grain protein penalty from using farm saved seed that is one to three years old,” Hall says. “Using farm-saved seed for a few years, until you want to introduce better genetics to the farm is a sound approach.”

“While these results suggest there is nothing wrong with using farm-saved seed if you want to grow the same variety for a couple years, the results do not suggest that you shouldn’t be purchasing Certified seed,” Hall says. “Certified seed has value. It provides seed that is true to type. It supports a breeding program that allows for the introduction of better genetics, which we’re going to need to keep us globally competitive.”

“This didn’t really surprise me because we didn’t have growing conditions that were particularly conducive to root rots,” Hall says. “Non-uniform seed coverage with small batch treatment may have also contributed to phytotoxicity, resulting in variability in the comparisons.”

There were also no significant differences in grain protein between untreated and treated seed.

“While seed treatment did not show a benefit in this research, it should be viewed as insurance as it is difficult to predict environmental conditions when root rots may occur,” Hall says. “Care should also be taken to apply the product as evenly as possible.”