The impacts of clubroot on susceptible canola cultivars are usually pretty obvious – the plants look drought-stricken and have large, irregular swellings (galls) on their roots. But the pathogen itself has remained somewhat enigmatic. Now a team of researchers mostly from Western Canada, led by Hossein Borhan and in collaboration with scientists from England and Poland, has sequenced the clubroot genome. This work is generating insights into the pathogen and how it functions, and is providing a springboard for future advances in clubroot management. 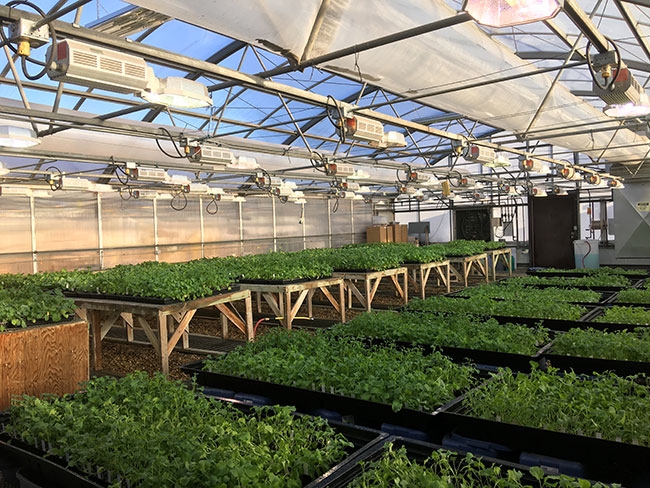 The clubroot pathogen, Plasmodiophora brassicae, attacks plants in the Brassicaceae family, including canola, mustard, broccoli and cabbage. This unusual pathogen spends its complex, multi-stage life cycle hidden in the soil and inside plant cells.

“Plasmodiophora brassicae was first described by the Russian biologist Mikhail Woronin in 1878 as the pathogen of clubroot disease. Since its discovery, there has been progress in understanding some aspects of the pathogen’s biology, such as its life cycle, infection and disease development, and the genetics of host resistance to clubroot. However, until recently we had very little knowledge about other aspects of the pathogen’s biology, such as its genome and genes that contribute to its virulence and growth in the host,” says Borhan, a research scientist with Agriculture and Agri-Food Canada (AAFC) in Saskatoon.

Progress in understanding the pathogen has been slow mainly because Plasmodiophora brassicae is difficult to study. “The pathogen is an obligate parasite. That means it can only grow and reproduce when living inside the host plant. So we can’t culture it, we can’t do experiments in Petri dishes and so on that we can do with other pathogens,” explains Stephen Strelkov, a professor at the University of Alberta.

To better understand this major pathogen, Borhan, Strelkov and the rest of their team, who were from various research agencies, started their clubroot genome study in about 2008.

Borhan explains the clubroot pathogen offers some challenges for genome sequencing. “Since the pathogen cannot be cultured, DNA for genome sequencing needs to be extracted from root galls. This causes contamination of the pathogen’s DNA with other soil microbes and plant DNA. In addition there could be more than one clubroot pathotype present within the galls. You don’t want a mixture of isolates because that would make sequencing and genome assembly very complicated. So the unwanted DNA needs to be removed.”

Fortunately Strelkov’s lab had prepared single-spore, purified isolates for all the clubroot pathotypes, or strains, known in Canada at that time – identified as pathotypes 2, 3, 5, 6 and 8.

For the genome sequencing work, the samples for these five pathotypes were obtained from various parts of Canada. “Pathotypes 3 and 2 were single-spore isolates derived from Alberta samples, pathotypes 5 and 8 were from Ontario samples, and pathotype 6 came from British Columbia,” Strelkov notes.

The researchers generated draft genomes for pathotype 3 and pathotype 6 because these two pathotypes have some significant differences from each other. “Pathotype 3 is one of the most important and virulent pathotypes on canola. It was the predominant pathotype on Canadian canola and the one that could cause the most disease on canola before resistant cultivars became available,” Strelkov explains. “Pathotype 6 is mainly a pathotype of cruciferous vegetables; it doesn’t do very much in terms of attacking canola.” The two pathotypes also differ in their geographical distribution: pathotype 3 is very prevalent on the Prairies, and pathotype 6 is mainly in Eastern Canada and British Columbia.

They then studied the characteristics of the clubroot genome and determined how the pathotype genomes differed from each other.

The researchers also did some RNA sequencing experiments to explore how the pathogen causes the disease in the host plant and how it takes nutrients from the host. For this work, they used two host species, Brassica napus (canola) and Arabidopsis thaliana(a small plant in the Brassicaceae family that has a small genome).

Highlights of key findings
One of the most important findings from this work was that clubroot has a small, compact genome. “The genome is about 24 megabase pairs, which is small compared to most eukaryote pathogens, like fungal pathogens of plants. For instance, the clubroot genome is roughly half the size of the blackleg genome, which is about 45 megabase pairs, and it is around one-tenth the size of some of the oomycete genomes like the pathogen that causes late blight of potato,” Borhan says.

Their work also showed clubroot has about 11,000 genes – about the same number of genes as in the bigger genomes of fungal pathogens. Clubroot’s smaller genome is owed to the fact that it has relatively small spaces between the genes, called intergenic spaces, and a relatively low number of repeated DNA sequences, compared to many other organisms. Borhan explains intergenic spaces are important in gene regulation. Having such small intergenic spaces affects how the clubroot genes are regulated and how they are co-ordinated in terms of expression; for instance, it may mean there are overlapping regulatory sequences for multiple adjacent genes.

“Pathotypes 2, 5 and 8 were really similar to pathotype 3, so together they form one group, and pathotype 6 stands alone. That correlates with their distribution and host specificity, since pathotypes 2, 3, 5 and 8 are all found mainly in the Prairie provinces and they all infect canola, while pathotype 6 is mainly in the east and infects vegetable brassicas.”

The researchers learned about the prevalence of chitin synthesis genes in clubroot; chitin is a fibrous substance that occurs in the exoskeletons of arthropods, like crustaceans, and in the cell walls of fungi. Borhan notes, “Chitin has been reported in clubroot resting spores before, but we noticed that the expression of chitin-related genes goes up when the spores are forming and when they are germinating. We believe chitin has a very important role in protecting the spores so they can survive in the soil for a long time [up to about 20 years].”

As well, they identified genes in clubroot that could affect the regulation of cytokine and auxin in the host plant. Strelkov explains, “These two plant hormones play a role in the development of the typical galls of clubroot on the roots, so this finding has potential implications for how the pathogen is causing the disease and how it is causing symptom development.”

The researchers found the clubroot genome lacks genes for making thiamine (vitamin B1) and some amino acids. “It looks like the pathogen is completely dependent on its host to get these nutrients; it can’t synthesize them by itself. It helps to explain why the pathogen won’t grow on its own,” Strelkov says.

One of the areas the Canadian collaborators are now delving into relates to how the pathogen infects its host and how that differs between the pathotypes. “In any pathogen, there are many, many pathogenicity genes; we call them effectors or virulence genes. For example, there are several hundred of these effectors in blackleg. Our prediction is that there are close to 600 of them in clubroot. So to get to the bottom of how they work together to overcome the plant defences is a daunting task,” Borhan says. “We have cloned some of these effectors and are testing them in plants. We have indications that some of the effectors from pathotype 3, for example, make the plant more susceptible. Hopefully our work and other people’s work will provide some clues about clubroot virulence, for example, why pathotype 3 is more aggressive on canola than 6.”

Most of the funding for their clubroot genome sequencing work was from Agriculture and Agri-Food Canada through a program called the Canadian Crop Genomics initiative. The researchers also obtained some funding from Growing Forward 2 through collaboration with Alberta Agriculture and Forestry and the University of Alberta to study the virulence effectors.

Applications and implications
Borhan and Strelkov see various ways the information from this research could be used.

In the short term, information about how one pathotype differs from another, such as the SNP profiles, could be used in developing molecular markers for pathotyping clubroot isolates. Markers would make it much easier for researchers to track changes in the pathogen strains, which would be very helpful for canola breeders and growers.

Strelkov explains that, currently, the pathotypes are identified based on testing the isolates on a standardized set of host plants, referred to as differential hosts, and then seeing which particular hosts get the disease. “We inoculate the isolates on many differential hosts and then let the plants grow for six to eight weeks [to assess the disease symptoms]. That takes a lot of labour to do the inoculations and space to grow the plants because the testing must be in a bio-secure environment,” he says. “With molecular markers, you could potentially do the extraction of DNA and then run the tests in a day or two. So you would get the same information in a much, much shorter time for a much lower cost. And you could potentially run many more samples than we do now. At present we have only so much room in our greenhouses, so we always have to carefully consider which samples to include.”

Strelkov adds, “This research provides some very important information as a starting point. Since 2013-14, we have found 11 new clubroot strains that are capable of overcoming the genetic resistance we had against the older pathotypes, including resistance to pathotype 3. Potentially, as we move forward, we could get genome information about some of these new pathotypes that could help us to understand where they came from and how they differ from the older pathotypes and maybe provide clues as to how they can overcome resistance and so on.”

Borhan and Strelkov believe the information from the clubroot genome opens up many possibilities for research that could lead to new ways to control the disease. For example, perhaps scientists could find a chemical or biocontrol option that would affect chitin or some other factor important to spore survival. Or perhaps, as they learn more about the pathogen’s infection process, they might find ways to make changes in the host plant to disrupt that infection process, resulting in stronger and more sustainable disease resistance.

“We hope that what we have generated will be a tool and resource for the research community in Canada and worldwide to tap into and learn more about the biology of clubroot and to come up with new ways of tackling the pathogen,” Borhan says.