The rotational benefits of pulse crops in a cereal and pulse rotation are well known. Including pulses in rotation is shown to increase soil available nitrogen (N), improve soil moisture reserves in deeper soil depths, enhance soil microbiology and soil health, and increase yield of a subsequent cereal crop. However, research had not measured to what extent residual soil N and soil moisture contribute to those higher yields. 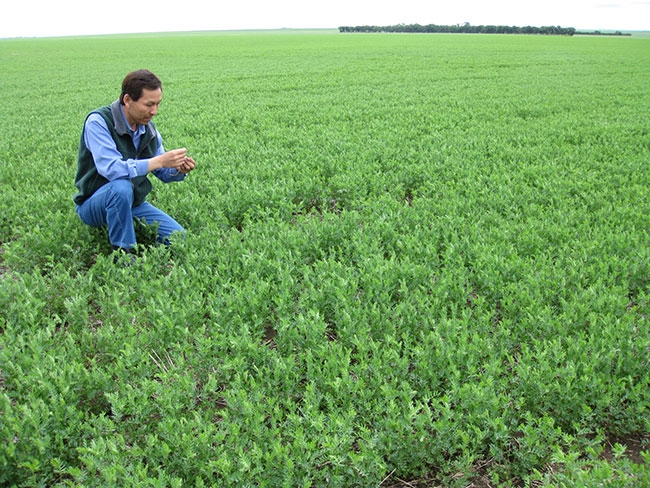 Wheat yield after lentil was 18 per cent higher compared to continuous wheat. The rotational benefits of pulse crops in a cereal and pulse rotation are well known.

“We thought that a higher frequency of pulses in rotation might increase residual soil water and nutrients, which provides greater benefits to the succeeding wheat crop compared with a wheat monoculture system,” Gan says.

Nine crop rotations were compared including pea, lentil and chickpea in different rotation intensities with wheat. The rotations were selected to see how shallow or deep rooting pulse crops would impact soil moisture and nutrients for the subsequent wheat crop. The fourth-year crop was always wheat – this was when nutrient, moisture and yield were measured.

In the research, chickpea rotations produced unexpected results. As a deeper-rooted and longer season crop, typically less soil moisture is found in the soil profile after chickpea. That wasn’t the case in this study, but Gan explains chickpea did not yield very well in the trials because of the wet growing conditions and high disease pressure.

“Normally, you would expect chickpea to use more water as a longer season crop, and would expect lower wheat yields the following year. Because chickpea didn’t grow very well, it left more moisture in the soil for the subsequent wheat crop to use,” Gan explains.

Wheat yield after lentil was 18 per cent higher compared to continuous wheat.

In the research, Gan also calculated what benefit the additional soil residual N and soil moisture following pulses in rotation contributed to the higher wheat yield. His analysis found that residual soil water and soil N together was responsible for 27.5 per cent at Brooks in 2014, 24 per cent at Swift Current in 2014, and 10.6 per cent at Swift Current in 2013 of the wheat yield increase – an average of 30 per cent. The other 70 per cent of yield response in wheat is unknown. Regardless of where the rotation pulse benefits come from, pulse growers are benefiting from having pulses in rotation.

“Conventional wisdom is that part of the rest of the yield response is related to the reduced disease pressure of wheat in the more diversified rotation systems. An important area of pulse rotational benefits is that the previous pulses promoted the activity of beneficial microbial community in the soil. Growing pulses in rotation improved many attributes of the soil, and we’ve been working over the past five years to understanding these benefits,” Gan says.