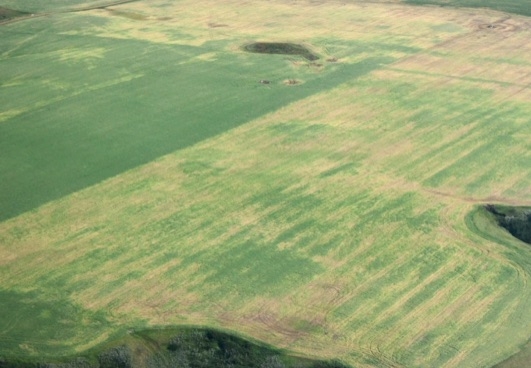 Root rots are caused by a complex of pathogens.

The surveys found Aphanomyces is widely distributed across the Prairies. For a pathogen that is a fairly new player on the scene, only detected and confirmed in 2012/2013, this widespread distribution across pretty much everywhere peas and lentils are grown would indicate this pathogen has been present for a number of years.

More than just Aphanomyces
Root rots are caused by a complex of pathogens. In Alberta pea fields, Pythium species and Rhizoctonia solani were present in many fields. Fusarium was the largest group found on pea roots. In Alberta, F. avenaceum and F. solani are the two major players. These species are more virulent on peas than some of the other Fusarium species. Fusarium redolens and F. oxysporum also commonly occur, but greenhouse tests showed they are not very virulent to peas. F. graminearum and F. culmorum were identified in a small number of fields, but these tend to cause more damage to wheat than to pulse crops.

In Saskatchewan pea fields, the percentage of fields with root rot was much higher. The same species were identified, but Rhizoctonia solani, F. avenaceum and F. solani were present in almost 80 to 90 per cent of the fields. F. graminearum and F. culmorum were also found at much higher levels than in Alberta.

Looking at all that survey data, we have identified the main pathogens we need to deal with. Aphanomyces is highly aggressive on pea and lentil with long-lived resting spores. Fusarium species are widely distributed but F. avenaceum and F. solani are the most virulent on pea and lentil.

Aphanomyces euteiches
Aphanomyces euteiches was first found in Saskatchewan in 2012 and in Alberta in 2013. This species is part of the oomycetes or water mould group, because a portion of its lifecycle (zoospores) is dependent upon free moisture. Zoospores have two flagella and if there’s free water available in the soil, they can swim very short distances to find a pea root. They will attach to the pea root, infect very quickly, and, after infection, can invade the whole root system. As nutrients in the roots are used up by the pathogen, it converts to structures called oospores, which have a very thick cell wall that allows them to survive in the soil for a number of years. The next time a susceptible host is planted into that soil, it induces the oospores to germinate, once again producing zoospores that infect pea or lentil roots. The production of these long-lived oospores makes it very challenging to deal with this pathogen.

Fusarium avenaceum is more of a generalist pathogen and is considered to be weakly opportunistic. The species generally survives on stubble, and since F. avenaceum has a broad host range, it can bridge from crop to crop until lentils or peas are planted – the host crops that they seem to like the most. They are favoured by higher soil temperatures and moderate soil moisture.

In terms of infection stage, what we’ve seen in the lab is that Aphanomyces can infect the plant at any point as long as there’s moisture in the soil. When the soil was allowed to dry up, the infection didn’t progress.

In contrast, Fusarium seems to infect at the seedling stage. This early infection then compounds over the growing season until it becomes obvious with visible above ground symptoms in the flowering stage. What we’ve also seen from doing field trials is that peas seem to be able to sustain a fair amount of Fusarium root rot before yield is impacted.

In reality what we often see when we’re pulling plants out of the field is that you’re really getting a combination of all symptoms and it becomes very difficult to tell whether you’re dealing with Aphanomyces or Fusarium. Most of the time, it’s both.

Root rot risk factors
The number 1 factor is crop history. When we’re looking at crop history, the biggest question is “How many times have you had peas or lentils in that rotation?” The more times you’ve had these crops in a rotation, the higher your risk is going to be of having root rots.

Soil moisture is the critical factor for Aphanomyces. When the oospores can sense a susceptible host, they will germinate, but if the soil is dry, they’ll just sit there and not produce zoospores.

Soil compaction is a big issue because of its impact on root growth and root health. That’s why we often see that areas with heavy clay soils are where the root rots have been the worst.

Soil pH can have an impact but it’s not a huge factor.

The optimal soil temperature for infection is about 20 C to 24 C. That’s why we see these root rots really pop up in July when you’re starting to get those warm soil temperatures.

Aphanomyces control options
We’re in the early phases of understanding Aphanomyces. The best recommendation we have right now is that if you’ve had a history of root rots in your field, or the last time you grew peas or lentils you noticed some yellowing patches starting, get those plants or soils tested to confirm the presence of Aphanomyces.

If it’s confirmed that you have Aphanomyces present in your field, then rotations will have to be extended from four to five years up to six to eight years. Then consider planting other pulse crops that are more resistant to Aphanomyces.

Sabine Banniza at the University of Saskatchewan (U of S) and I tested a number of different legume crops to see which ones were hosts or non-hosts. Peas, lentils, and the vetches like cicer milkvetch are very susceptible to Aphanomyces. Dry bean and alfalfa show variable responses depending on the cultivar. Some of the more resistant pulse crop choices that show very little infection are chickpeas, fababeans, and soybeans. Chickpeas develop some infection, but it doesn’t spread enough to cause any damage to the plants. We see almost no infection at all in fababeans and soybeans. In terms of forage legume crops, sainfoin and fenugreek are also really good options.

The other product we’ve been evaluating is Phostrol. This is a mixture of different phosphite salts. It’s currently not registered on pulse crops, so we’re looking at whether there is any reason to expand that label to pulse crops. It is registered on potatoes against late blight.

However, these two products won’t provide full-season protection. If you get those wet conditions coming on later into June or July, these products really won’t be active anymore.

We did some trials in the greenhouse looking at different oospore doses from zero all the way up to 1,000 oospores per gram of soil and found that ethaboxam was very effective in the greenhouse at reducing early-season Aphanomyces root rot. In field trials, we found a mixture of ethaboxam and Apron gave us some suppression of disease severity four to five weeks after seeding. But when we start looking at that flowering or mid-pod fill timing, you’re not seeing that disease suppression anymore. This is what we would expect out of a seed treatment.

The benefit of these options is that they can provide long-term solutions because they can potentially reduce oospore levels in the soil rather than just targeting the early-season infection stage.

Aphanomyces infection levels
In the greenhouse, we are also looking at what level of Aphanomyces infection is necessary to cause disease loss. We want to develop a soil test that will quantify the inoculum potential in a field. What we are seeing so far is almost an all-or-nothing response to different oospore levels. We also see differences in disease response according to soil zones. Dark Brown soils are more conducive, followed by Brown, and Black seems to be the least conducive to disease. It takes about 100 oospores per gram of soil in the Dark Brown soils to cause severe root rot, whereas in the Brown and the Black you need about 750 oospores per gram of soil to cause the same level of disease. But, if you add Fusarium back into that mix, then it only takes 100 oospores per gram of soil in all soils types to cause fairly severe disease.

In another project with Sabine Banniza at the U of S, we looked at Aphanomyces distribution in a number of fields, at different depths and in different soil zones. The highest pathogen levels were in the top zero to 20 centimetre soil profile, but in some fields, we were finding it all the way down to the 40 to 60 centimetre soil depth. This would indicate that, even though this is a new pathogen, it’s been present in the soil for a while and probably moved down to those lower zones with water movement.

In summary, we are finding that root rots are widespread across the Prairies. The impact in 2016 wasn’t as dramatic as 2014 because we had a mix of a wet and a dry growing season. Aphanomyces and Fusarium occur as a root rot complex. They’re difficult to distinguish, but we do find that they’re acting together synergistically, so we have to consider both pathogens as causal agents of these root rots. You need a longer rotation between susceptible pulse crops, which is currently the only management recommendation. Fababeans, soybeans and chickpeas are good options in infested fields.

This article is a summary of the presentation “Aphanomyces and root rots of pulse crops,” delivered by Dr. Syama Chatterton, Agriculture and Agri-Food Canada, Lethbridge, Alberta, at the Field Crop Disease Summit, Feb. 21-22, 2017. Click here to download the full presentation.

Don’t forget to subscribe to our email newsletters so you’re the first to know about current research in crop management.