A relatively new root rot disease in pea and lentil crops is steadily expanding across Alberta, Saskatchewan and Manitoba. Caused by the soilborne “water-mould” pathogen Aphanomyces euteiches, the root rot can cause infection any time throughout the growing season under the right field conditions. Currently, longer crop rotations are recommended, but few management options are available. 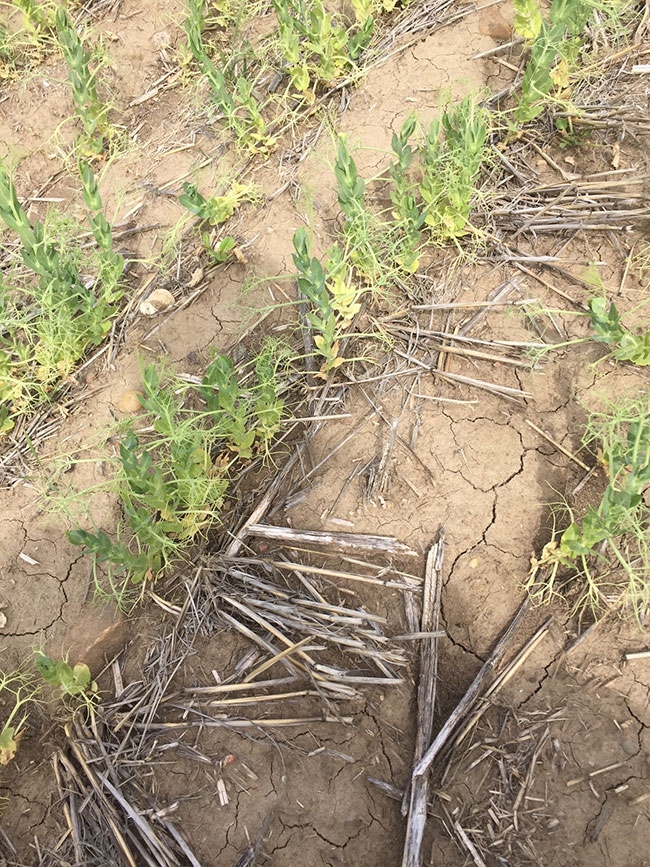 “Aphanomyces euteiches was first identified in Saskatchewan in 2012 and in Alberta in 2013,” says Syama Chatterton, a research scientist with Agriculture and Agri-Food Canada (AAFC) in Lethbridge, Alta. “Since then, we have been conducting more widespread field surveys across Alberta and Saskatchewan and have found Aphanomyces root rot wherever peas or lentils have been grown. In 2016, some fields in Manitoba were included in the survey, and the disease is present there as well.”

Researchers suspect the disease may have been present earlier, but with disease symptoms similar to root rot caused by other pathogens such as Fusarium, Rhizoctonia, and Pythium, Aphanomyces may have been overlooked. “There are also a couple of other factors that have likely contributed to the recent increase in the disease,” Chatterton explains. “A. euteiches is a pathogen that requires moisture for infection, and we have been into a wet cycle with very wet springs over the last couple of years. We are also at that critical period of production time for peas and lentils, with many fields now having a longer history of production and the disease is beginning to show up in those fields.”

Root rots are widespread, but have less of an impact in dry years. For example, in 2015, which was a drier year, 20 to 30 per cent of fields tested positive for A. euteiches compared to wetter conditions seen in 2016, when between 60 and 70 per cent of fields in Alberta and Saskatchewan tested positive. In Alberta, root rots tended to be more prevalent in the Dark Brown soil zone, but in Saskatchewan it was the Brown soil zone, possibly due to wetter conditions over the past few growing seasons.

“The other main root rot pathogen of concern besides A. euteiches, is a Fusarium spp., which is widely distributed and includes both beneficial and pathogenic disease-causing species that can often be difficult to distinguish,” Chatterton says. “Both root rot pathogens are a concern individually, however when they occur together, the disease symptoms are worse than either disease on their own.” The symptoms of A. euteiches in pea and lentil, which under optimal conditions will be seen within 10 days of infection, include yellowing and wilting of shoots, pinching of epicotyl stopping abruptly at the soil line, and below ground lateral root decay in which they become watery and honey-brown. With Fusarium, the shoots and lateral roots remain healthy while the taproot turns black, starting at the seed attachment.

“If a grower has confirmed A. euteiches in their field, the current recommendation is to look at prolonging rotations from six to eight years before returning to peas or lentils.”

“Currently the only feasible management option for controlling A. euteiches is prolonged rotations away from susceptible pulse crops, which are pea and lentil,” Chatterton says. “If a grower has confirmed A. euteiches in their field, the current recommendation is to look at prolonging rotations from six to eight years before returning to peas or lentils. Other pulse crops such as chickpeas, soybeans and fababeans, which are fairly resistant, can be options where they are suitable. We know those crops don’t work in every soil zone or location, so growers may have to consider other non-legume crop alternatives.” 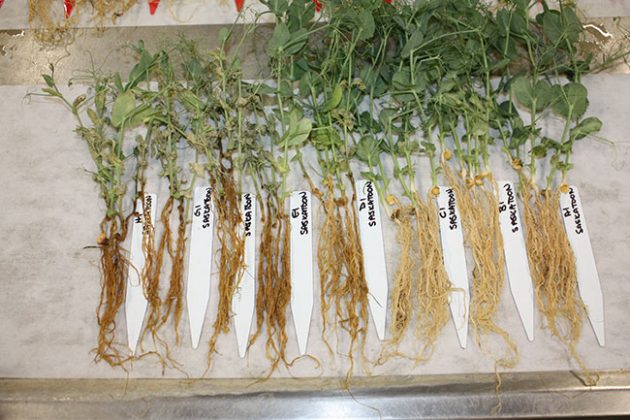 Similar to the soilborne clubroot disease in canola, growers with A. euteiches confirmed in a field need to avoid moving infested soil from one field to another. Consider seeding A. euteiches infected fields last and make sure to clean and sanitize field equipment before moving into the next field. Growers can look to sanitization and cleaning protocols recommended for clubroot as good examples for managing soils and field equipment in A. euteiches infected fields.

Chatterton and her colleagues have also been evaluating seed treatments in field trials over the past couple of years. Currently Intego Solo (ethaboxam) is the only seed treatment registered for early season suppression of A. euteiches in lentil. “Intego Solo is designed to be used in combination with another product, so select a product that also has efficacy against Fusarium and some of the other soilborne pathogens. In our trials so far, we do see early season suppression, which is what Intego Solo is registered for. However, because infection with A. euteiches can occur any time over the growing season as long as there is moisture, early seed treatment doesn’t help with late season root rot infections. We are also finding that early season infection seems to cause higher yield losses than infection that occurs later in the growing season when plants are more established.”

Another major research effort is focused on developing a quantitative soil test for estimating the risk of Aphanomyces root rot. Seed testing labs currently test for the presence or absence of the pathogen on the roots of the plants. “We are trying to determine how much inoculum is required in the soil to start the infection, and whether or not there are differences across the various soil zones,” Chatterton explains. “This information can then be used to develop a quantitative soil test that can provide growers with an assessment of low, medium or high risk of infection based on their soil test.”

“We are trying to determine how much inoculum is required in the soil to start the infection, and whether or not there are differences across the various soil zones.”

Researchers are also looking at other agronomic and field-based solutions that may help reduce root rot impacts. Small-plot trials evaluating soil amendments like calcium are underway. Calcium can prevent the germination of infectious spores that attach to the roots, therefore preventing infection. If the results are positive on small-plot trials, then researchers will have to determine whether or not this is a practical or feasible option for commercial-scale production.

Chatterton adds that in 2017, researchers will be taking a greenhouse project using Brassica cover crops as a green manure to the field. “In the greenhouse trials, research out of Sweden showed that as Brassica green manure crops break down, they biofumigate soil and suppress infection. We want to implement that same strategy in the field and evaluate if it is feasible in no-till systems directly or if the green manure needs to be incorporated to be most effective. Researchers and industry are working to find additional tools to help growers make more informed decisions regarding the length of crop rotations and field avoidance and other agronomic strategies for managing Aphanomyces root rot.”