Wheat is the most favoured food source for human beings on the planet, but its production has gained a negative reputation for releasing greenhouse gases. Now, a 25-year long field experiment in Saskatchewan proves that growing wheat using a suite of improved farming practices can actually result in more carbon being sequestered than released.

“A large global challenge has been to produce sufficient quantity of grains to meet the need of the increasing human population for food, feed, fiber and fuel, while reducing the impact of farming on the environment. This study shows that with a handful of improved farming practices in crop production, this is definitely possible and achievable,” says Dr. Yantai Gan, a senior research scientist with Agriculture and Agri-Food Canada at the Semiarid Prairie Agricultural Research Centre in Swift Current, Sask.

On the one hand, the world needs more food: with the global population projected to increase by a staggering 2.3 billion over the next 35 years, maximizing production on arable land will be key to keeping the world’s mouths fed. On the other hand, food production carries with it significant carbon emission concerns, so experts have always expected that ramping up production to meet demand will carry very negative environmental impacts.

“The general public, producers and politicians think that the production of field crops is emitting greenhouse gas and contributing to global warming. What they are missing is that they don’t know how much carbon is actually being captured by plants from the atmosphere,” says Gan. “If cropping systems are managed very well through the use of improved farming practices, crop production can be carbon-neutral or carbon-negative. That is something that will change the landscape for the general public’s view on crop production.” 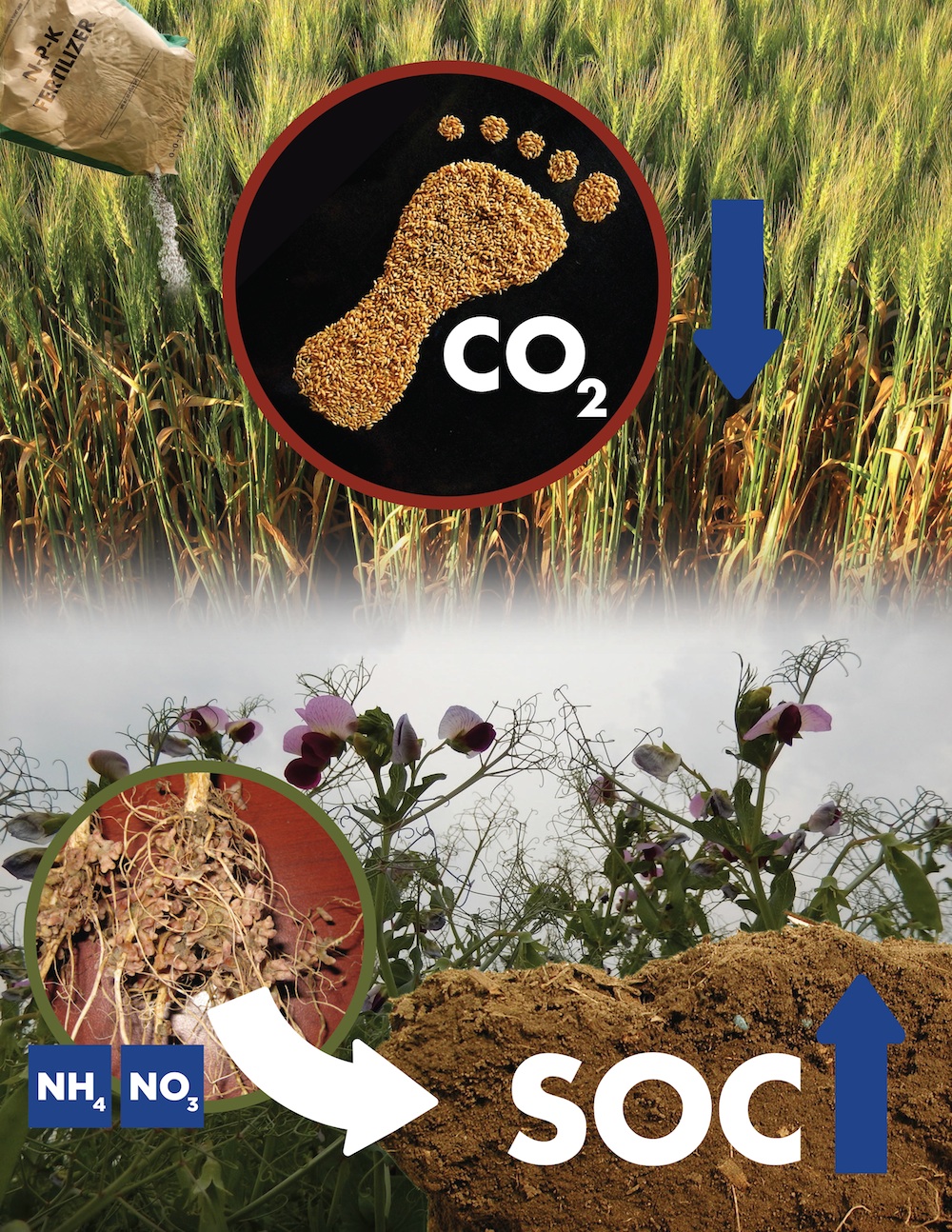 The study’s research team utilized three improved farming practices to produce a carbon-negative production equation. Since nitrogen is the major contributor to greenhouse gas, they fertilized crops based on soil test results to ensure a crop received only the nitrogen it actually required; they reduced the frequency of summer fallow; and they included legumes in their crop rotation to fix atmospheric nitrogen, significantly reducing the necessity of applying chemical fertilizer.

Together, these practices reduced the carbon footprint of growing wheat by about the equivalent of 256 kg of CO2 per hectare per year. Or, to look at it from the opposite angle, these improved practices sequestered the equivalent of 0.027 to 0.3777 kg of CO2 for every kilogram of wheat produced.

These farming techniques are positive environmentally, but they also support an efficient and productive farming operation: the ultimate win-win scenario. The benefits of these techniques have not been missed by producers: compared to when data for this study was first collected in the late 1980s, there is a substantial increase in the uptake of all of the targeted practice improvements because producers recognize the economic advantages of doing so.

Meanwhile, summerfallow acreage continued to decline sharply. In 1977, about 45 per cent of all Canadian Prairie farm land was under summerfallow, with the common understanding that summerfallow was to help conserve soil moisture and increase soil nitrogen from the mineralization of soil organic matter during the fallow periods. However, this summer fallowing practice has detrimental environmental impacts. Tillage during the fallow period increases machinery-related use of fossil fuel energy and increases greenhouse gas emissions. More importantly, summerfallowing causes serious soil degradation with rapid loss of soil organic matter, thus increasing the carbon footprint of the cropping systems. By 2011, summerfallow acreage on the Prairies had dropped to 3.5 million hectares (which Gan points out means producers still have a 3.5 million hectare opportunity to replace summerfallow with annual legumes or other alternative crops).

“The cost of nitrogen fertilizer is so high, and producers have learned they can make their own nitrogen by planting nitrogen fixing legumes,” says Gan. “Canada’s lentils are known for the quality and high protein, which has created strong international demand. A grower will make the same amount on lentils as he will on durum, but the next year he won’t have to fertilize the subsequent crops as much, so he’ll come out ahead.”

Currently, there is no direct cost to producers for emitting greenhouse gas, but neither is there a benefit to sequestering additional carbon aside from the few carbon offsets currently available to producers such as the zero-tillage protocol.

“I do hope we see that change,” says Gan. “We need policies to catch up to give farmers a benefit if they adopted improved farming practices. No-tillage is only a small part of the total carbon sequestration package. What we are looking at is way beyond that.

“My hope is that we educate producers to do a better job, and we educate everyone – the general public, politicians and producers – to recognize that a carefully managed, efficient and diversified cropping system can make a huge difference for the environment.”

To view the full study, go to www.nature.com, and enter “Improving farming practices reduces the carbon footprint of spring wheat production” into the search engine.