Who rents a drag strip, borrows seven-ton fifth wheel trailers and has five respected automotive journalists race the one-ton trucks head to head? We do. The eighth annual Canadian Truck King Challenge did just that (and much more) to clearly show the truck buying public which is the best of the best for 2015.

This year, three heavy-duty (HD) pickups from Ram, Ford and GMC ran head-to-head at the Grand Bend, Ont., MotorPlex drag strip while towing 15,000 lb trailers as just one part of two intensive days of Truck King testing. The outcome? The GMC Sierra 3500 beat the Ford and Ram in each heat. It would also go on to win the title.

But back to the drag strip. A curious fact emerged during this testing. On paper, the GMC boasted the least amount of horsepower and torque among the competitors. Yet it won each race. We ran it several times, with the trailer and without. It pulled away from its competition each time. And, that’s the difference between real-world testing and paper tigers.

Here are the quickest quarter miles from each truck taken from multiple runs:

RAM
16.927 seconds when running empty
23.581 seconds with the trailer attached

The trap speed for all three trucks (at the quarter-mile line) was always plus/minus one MPH of 80 MPH. Trap Speed with trailer attached, again for all three trucks, was also plus/minus one MPH of 60 MPH. GM’s HD’s are not new to the Truck King podium – the Chevy Silverado HD took the title in 2013 but failed last year mostly due to its dated interior. This year that’s changed with a significant interior refresh. However what really put it over the top are new electronic systems for 2015 that can only be felt, not seen. And those can only be really appreciated when towing.

After eight years of testing trucks, most readers are familiar with our methods; and while locations sometimes change, the methodology remains the same. We use multiple qualified automotive journalist judges who drive the trucks back-to-back in the same conditions on the same day.

We always start with empty loops then we add payload and finally towing (with the payload removed). Over the years, we have always kept track of our fuel consumption during each of these tests; however, our pencil and paper calculations were replaced last year with electronic data readers that take that information directly from the trucks’ computer. These readers are plugged into the on-board diagnostics (OBD) port on each truck and record speed, distance, time and even hard acceleration and braking events. Needless to say, this is much more accurate in determining fuel consumption (see Table 1). This was our second year using the readers – they will be standard testing equipment during all Truck King events from now on.

Once again we spent two days driving around southwestern Ontario. The first day, we ran the trucks empty from Toronto to London (200 km). Next, we loaded up at Patene Building Supplies of London. Supplier IKO has helped us out for several years by preparing pallets of shingles to use as payload. In this case, each pallet weighed 4,080 lb exactly. The dimensions of each pallet were four feet wide, four feet high, and five feet long. After loading, we took the shingles for a 200 km ride, switching up trucks every 30 minutes.

The next morning saw us hooking up fifth wheel travel trailers at our other partner’s place of business – Can-Am RV Centre. We hitched them to three similar fifth-wheel RV trailers. These weighed in at around 14,500 lb each. We than spent the day doing a 300 km tour with the judges, which included a three-hour stop at the drag strip in Grand Bend, Ont.

As always, each judge (five for this competition) scores each truck independently and the final outcome is an average. To view and download the full result spreadsheets, visit www.canadiantruckkingchallenge.ca. 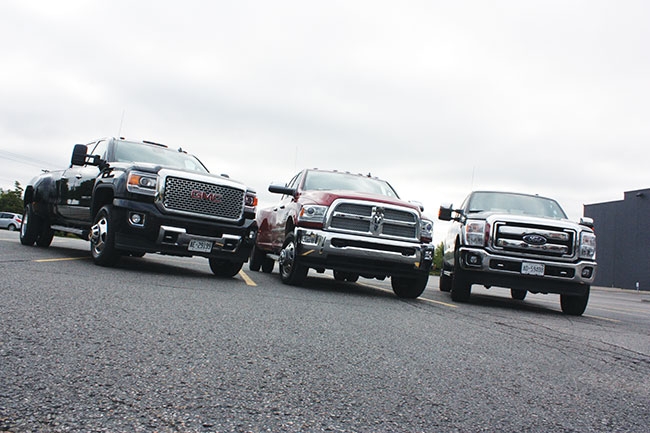 This year Who rents a drag strip